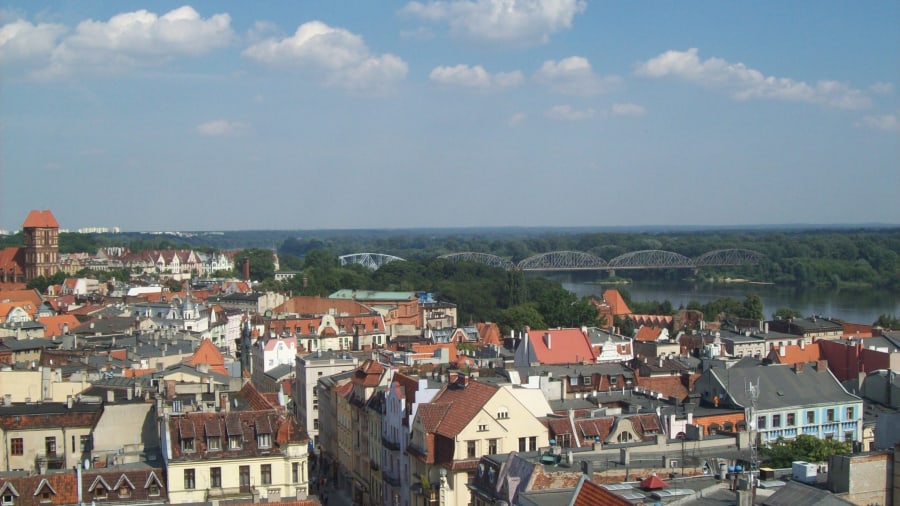 There’s no doubt about it – there are plenty of things to do in Toruń.

Before last Saturday’s visit, I’d actually been to Toruń twice before. Once in 2009, and again a few years later with my father.

So, on a pleasantly warm and bright Saturday morning, my wife and I drove from Gdańsk to Toruń. We parked up at Atrium Copernicus shopping complex some three kilometres east of the Old Town. I’d seen on Google Maps that Toruń Wschodni (east) train station is just a three-minute walk from Atrium Copernicus. Hence, the plan was to park up and take a train to Toruń Miasto train station just outside of the Old Town.

Top things to do in Toruń

1. Stroll along Philadelphia Boulevard right by the Vistula River

Toruń Miasto train station is but a short stroll to Philadelphia Boulevard (Bulwar Filadelfijski). It’s on the bank of the Vistula River and is a wonderful place to start your walking tour of Toruń.

Hence, we trundled down the hill from the train station towards the river.

When I looked out west across the vistula towards Most drogowy im. Józefa Piłsudskiego (a road bridge named after Józef Piłsudski), memories from 2009 came flooding back:

Walking along Philadelphia Boulevard, you really do get a unique view of the city, most notably the imposing defence walls and the bridges spanning across the mighty Vistula.

So, where can you chill out and take in the charming surroundings? Open for guests in the summer season, pop into one of the open-air cafes on the barges which moor along the bank. 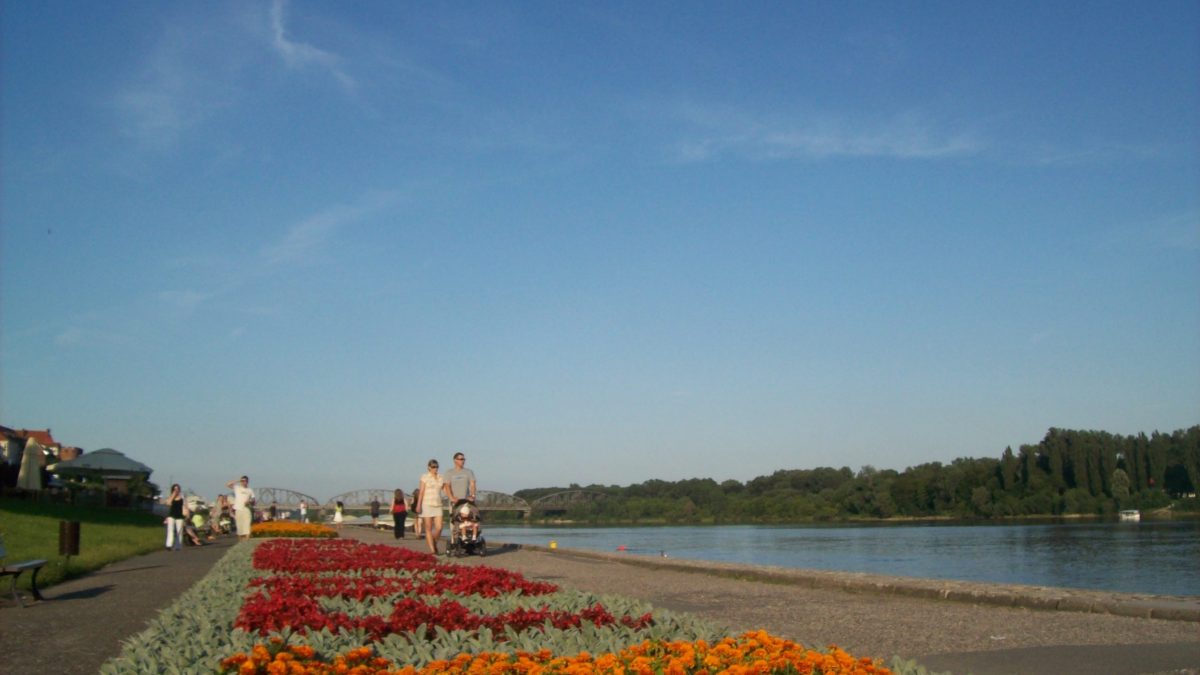 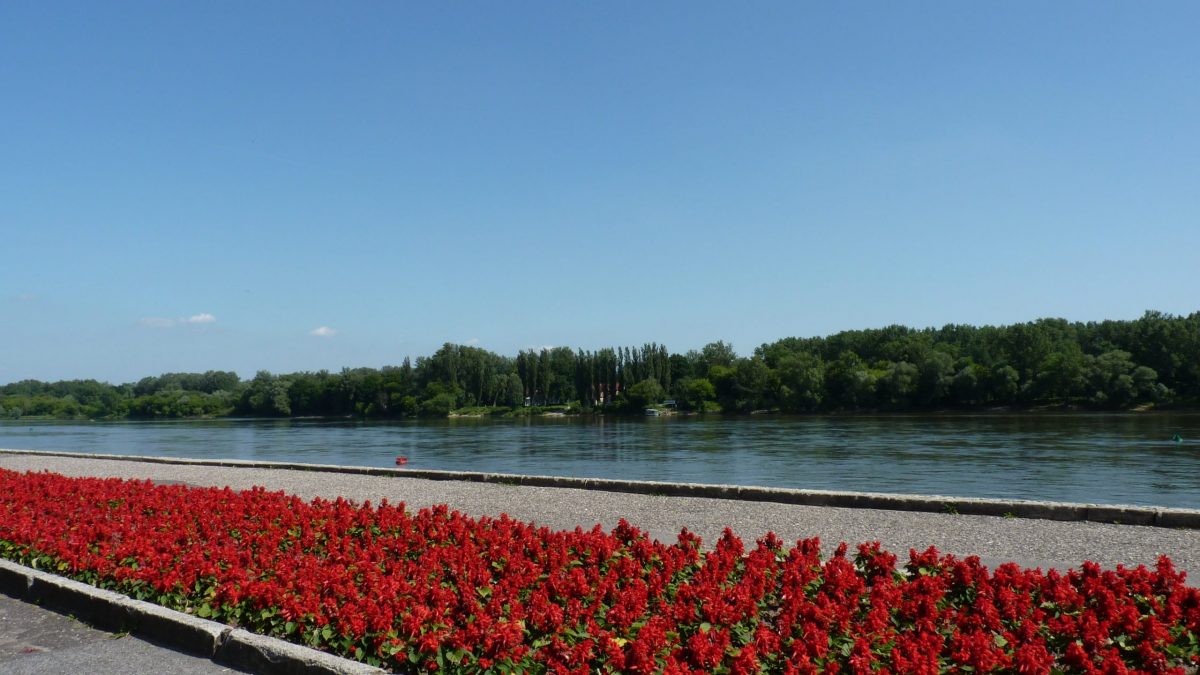 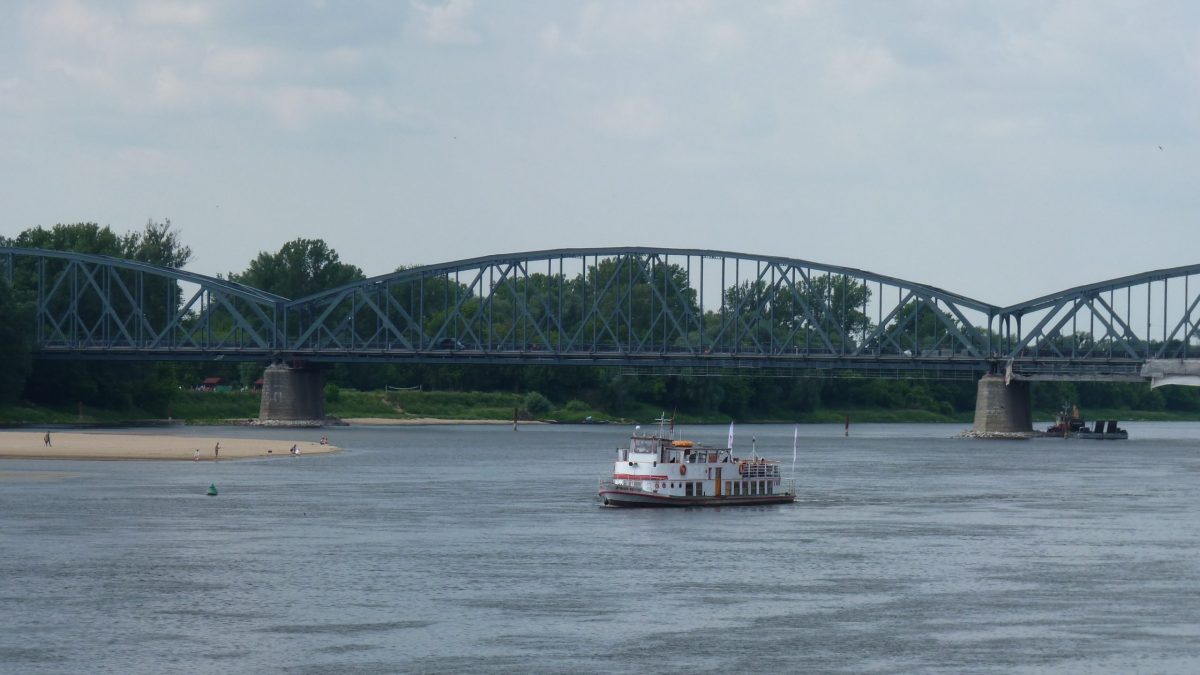 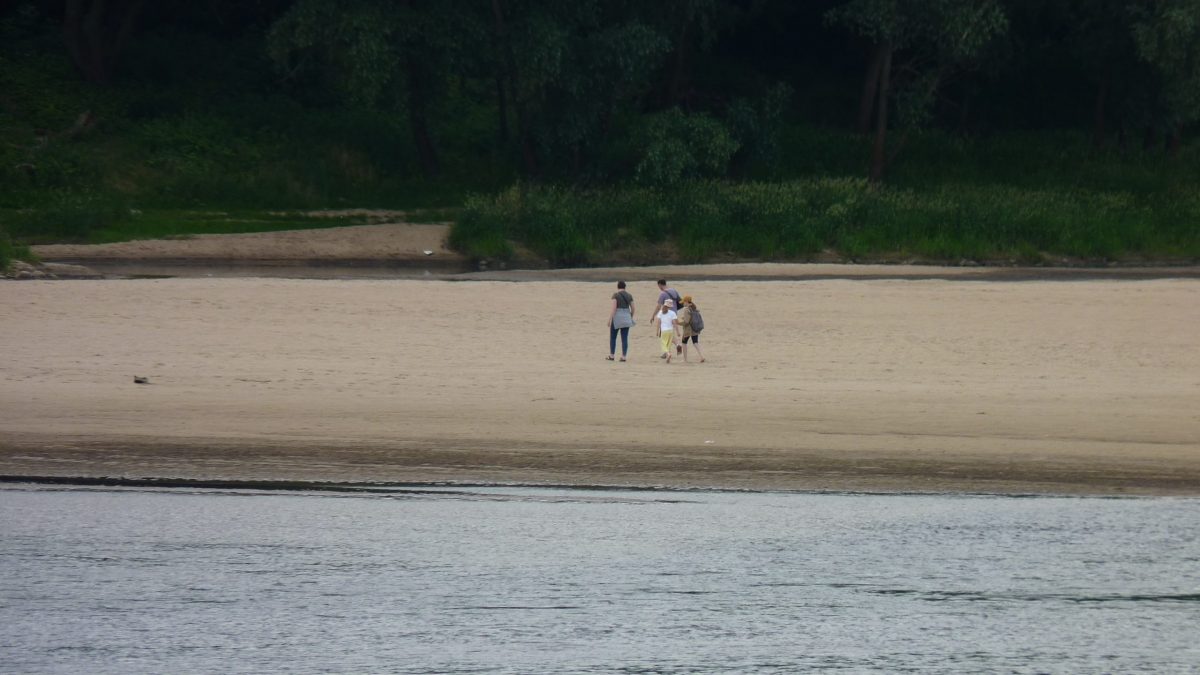 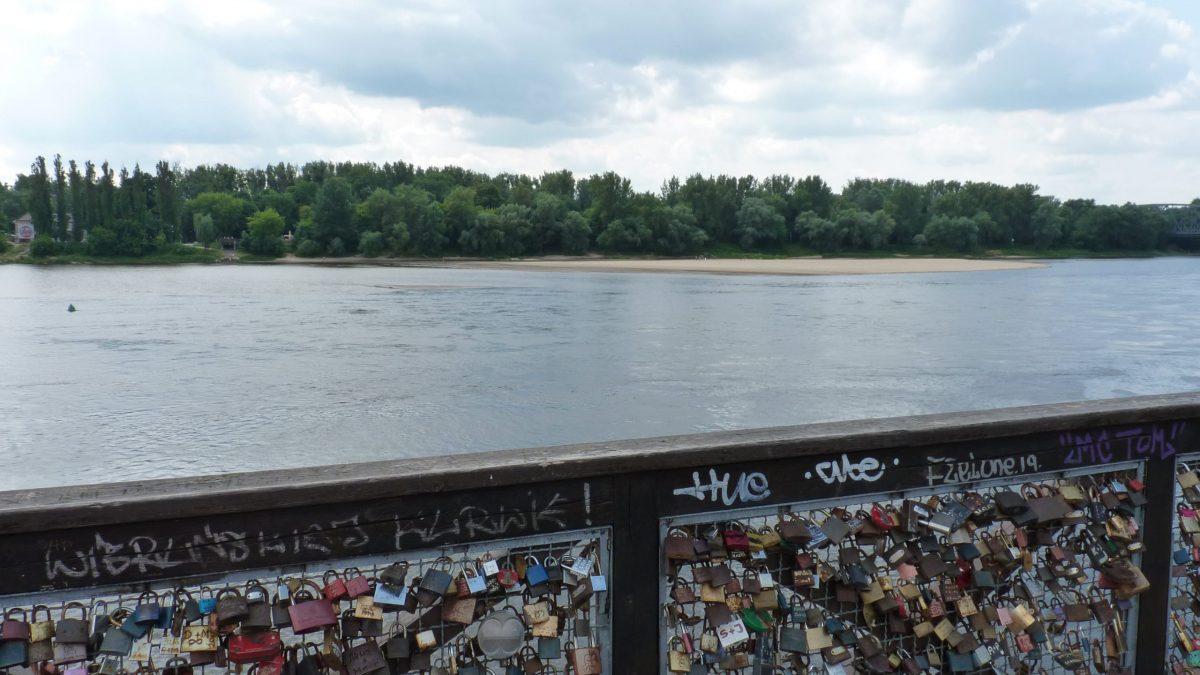 2. Admire the gates and the Leaning Tower of Toruń

As you amble along Philadelphia Boulevard, you can’t help but notice several huge gateways scattered along the site where the defence system once stood.

Let’s find out a little about the most well-preserved gates and the Leaning Tower of Toruń:

Located on the south-eastern side of the Old Town, Bridge Gate (Brama Mostowa) was built in 1432.

The gate was originally called Transport (Przewoźna) or Ferry (Promowa) Gate because it stood on the route leading to the Vistula ferry crossing point.

Its present name originates from the first bridge across the Vistula in Toruń, which was constructed in 1500. Despite the damage sustained to the bridge’s wooden structure due to military action and spring thaws, the original bridge served the city until the second half of the 19th century.

Of all the medieval gates protecting Toruń, the Bridge Gate was the most technologically advanced. Its rounded walls helped to protect against the impact of artillery fire. Moreover, craftily designed loopholes allowed for the use of cannons to defend the city. 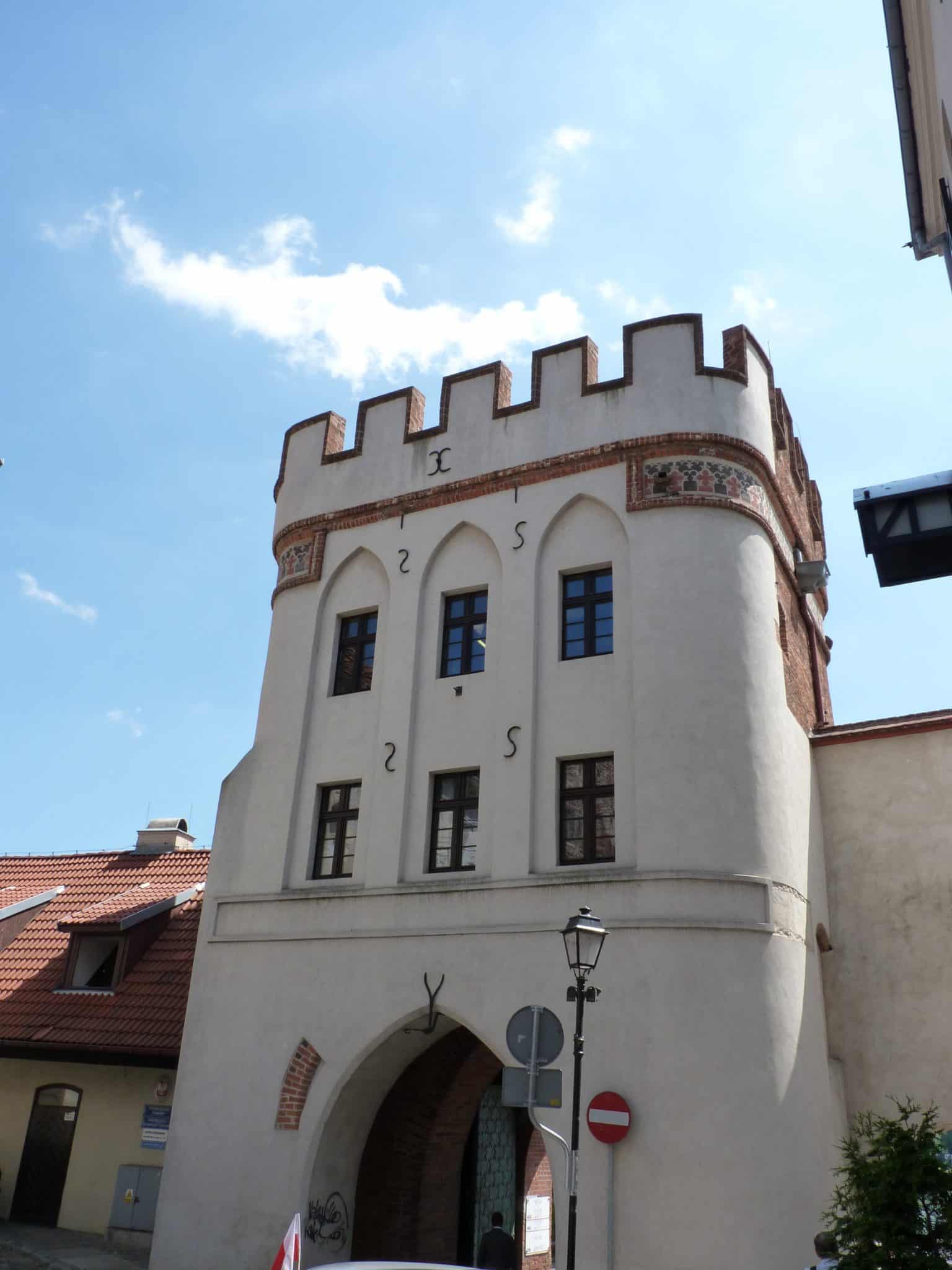 Built in the Middle Ages, the present appearance of the Sailors’ Gate (Brama Żeglarska) stems from a major 19th-century reconstruction.

The Sailor’s Gate straddles Żeglarska Street, which leads down to the riverside quay and St. Johns’ Cathedral and the Old Town market square. Hence, the gate was arguably the most pivotal entrance to the city.

At the Sailors’ Gate, Polish kings were jubilantly greeted to the accompaniment of the largest medieval bell in Poland – Tuba Dei. The bell hangs in the tower of St. Johns’ Cathedral. Former mayors of Toruń handed the keys to the city gates to the sovereigns and invited them to stay at the royal chambers in the Town Hall. Therefore, Żeglarska street became known as the Royal Route.

Also known as the Gate of the Holy Spirit, the Convent Gate (Brama Klasztorna) was built in the early 14th century. It takes its name from the nearby Benedictine convent, situated outside the town walls and demolished in the middle of the 17th century.

The Convent Gate retains visible traces of the defence system: a huge gateway, an alcove with a grate that could be raised and lowered, and an opening through which stones were hurled at attackers and hot porridge or boiling water was poured.

The Leaning Tower of Toruń

Like the Leaning Tower of Pisa in Italy, the leaning tower of Toruń (Krzywa Wieża) owes its name to its noteworthy tilt.

The tower was constructed at the turn of the 14th century as one of many towers built in the city walls.

Defenders of the city would hoist projectiles and scalding-hot liquids to the top floor of the tower to repel sieges.

3. Visit the House of Nicolause Copernicus

Done with gawping at the Leaning Tower, we headed north towards Copernicus Street (Ul. Mikołaja Kopernika).

Toruń gingerbread has traditionally been presented as a gift by the city of Toruń to Polish leaders, Polish kings, artists and others regarded in high esteem in Polish society.

Anyway, let’s get back to Copernicus, his family and the House of Copernicus.

Copernicus, who’s best known for his theory that the Sun, rather than the Earth, is at the centre of the universe, was born on 19 February 1473.

Regarding Nicolaus Copernicus’s family, facts and consensus are rather few and far between. What we do know is that the surname – Kopernik – came from a profession functioning at that time. Kopernik means a foundry worker who was involved in the extracting, smelting and trade of copper.

Nicolaus’s paternal side of the family had ties to Kraków. The astronomer’s father, Nicolaus Copernicus Senior, traded in copper and moved to Toruń circa 1456. By 1458, he had become a citizen of the city. Around this time, he married Barbara Watzenrode. Copernicus’s mother’s family had been connected to Toruń as far back as 1369.

The House of Nicolaus Copernicus

The House of Nicolaus Copernicus belonged to his family in the years 1463-1480. Historians surmise that Nicolaus was born in the house.

The interior comprises a high entrance hall with an open kitchen on the ground floor and a merchant’s office, the upstairs living quarters and higher floors which act as storerooms.

In 2017-2018, the House of Copernicus was the subject of a thorough modernisation. Today, the house combines modern multimedia technologies with the historic fabric of a typical medieval house.

Visitors can immerse themselves in impressions and knowledge which focus on three subject areas:

2. The everyday life of a middle-class family in a late-Gothic Hanseatic homestead

3. The life and work of Copernicus himself

As the pictures below show, the sheer variety of material in the house should keep every visitor reasonably engrossed.

Nevertheless, I expected a little bit more about the life and work of Copernicus.

As for the features of domestic life in the 15th century, I wasn’t able to get a sense of what it was like back in medieval times for families who lived in such a house because the exhibits are copies. I couldn’t get over the lack of authenticity.

Still, there are some genuine novelties in the house. For instance, there is a medieval roof truss, on which a starry sky show takes place. This reminds visitors that it was here that the young Nicolaus Copernicus gazed at the stars for the first time.

Despite my nitpicking, visiting the House of Nicolaus Copernicus is one of the top things to do in Toruń. 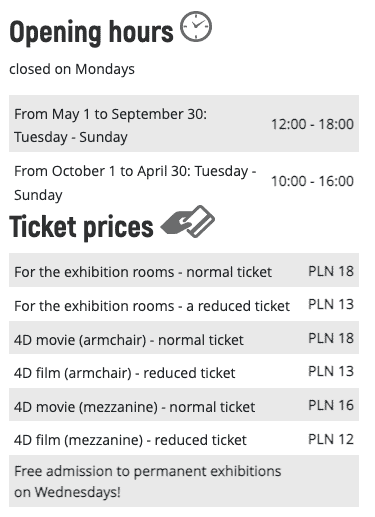 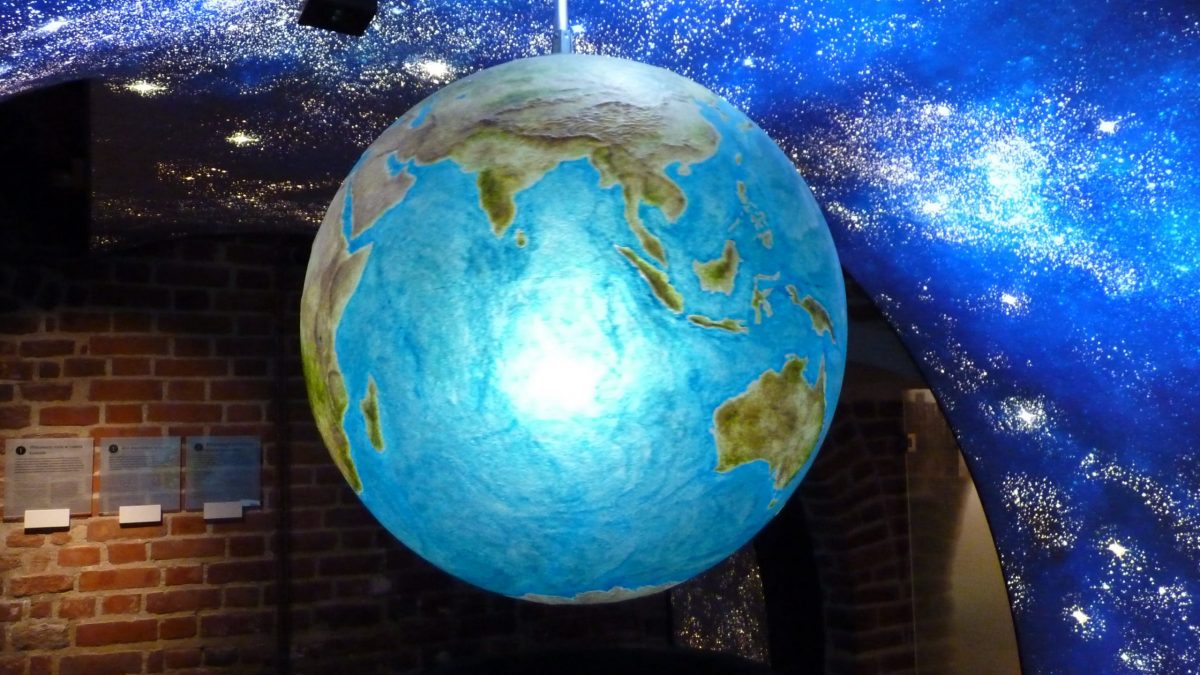 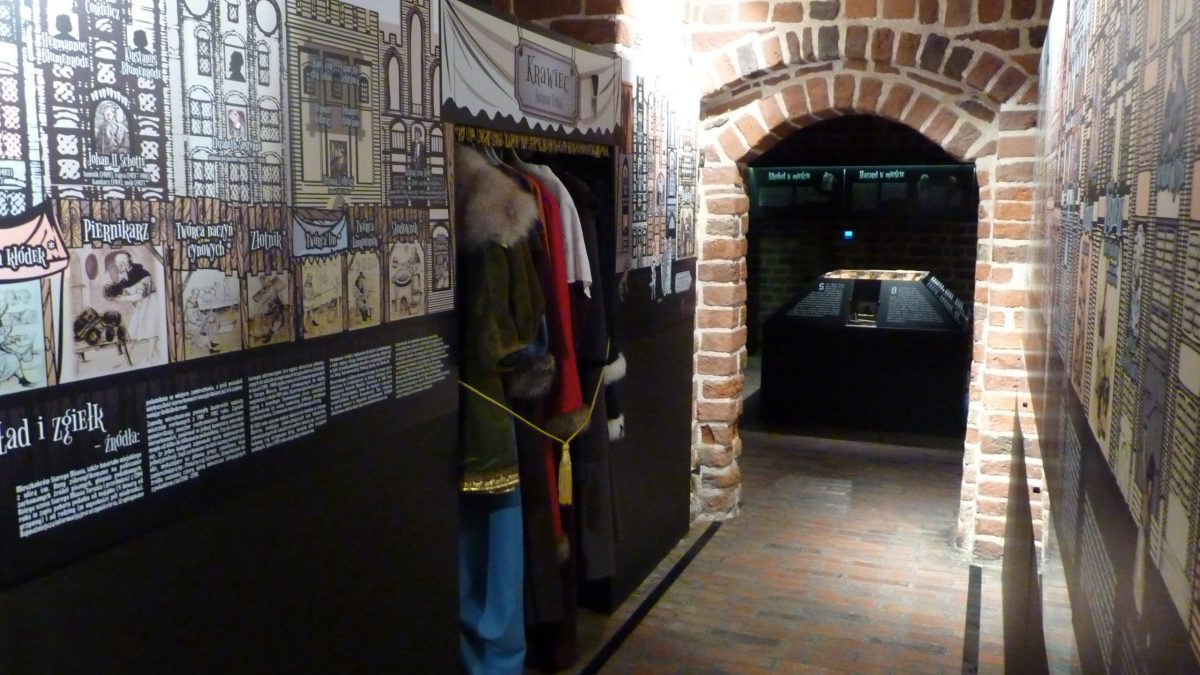 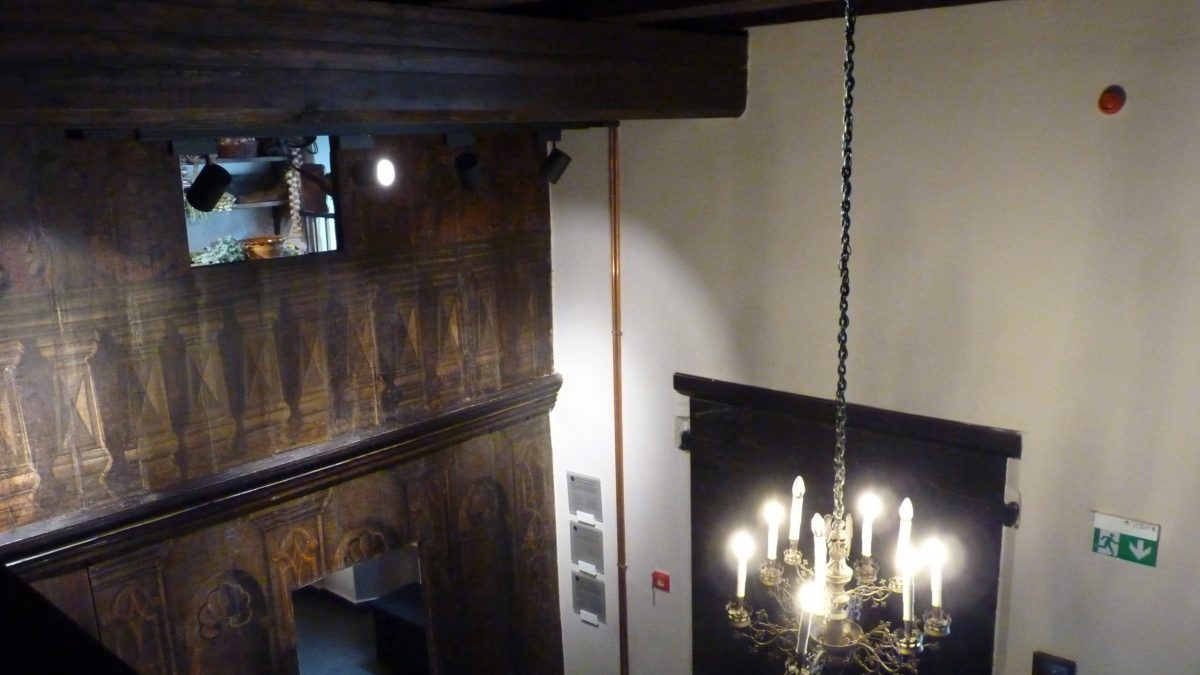 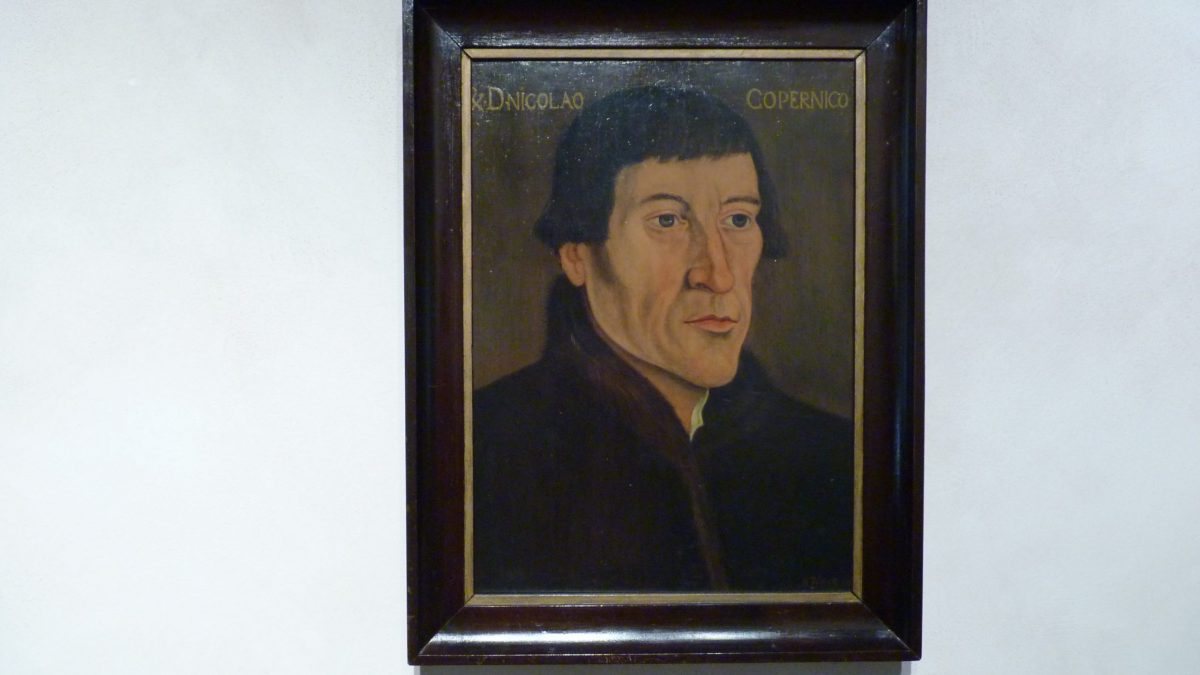 4. Soak up the atmosphere around the Copernicus monument

The main pedestrianised street running from east to west, eventually funnelling into the Old Town Market Square, is called Szeroka.

Where the market square meets Szeroka, the Nicolaus Copernicus Monument imposes itself on every passer-by.

The monument shows off Copernicus in academic dress. His left hand holds an astrolabe (an ancient astronomical instrument that was a handheld model of the universe). Copernicus’s right index finger points to the heavens.

Behind Copernicus is the Old Town City Hall. Made a UNESCO World Heritage site in 1997, this Gothic wonder was built in stages during the 13th and 14th centuries.

My wife said the area around Szeroka Street and the Old Town Market Square has “soul”. 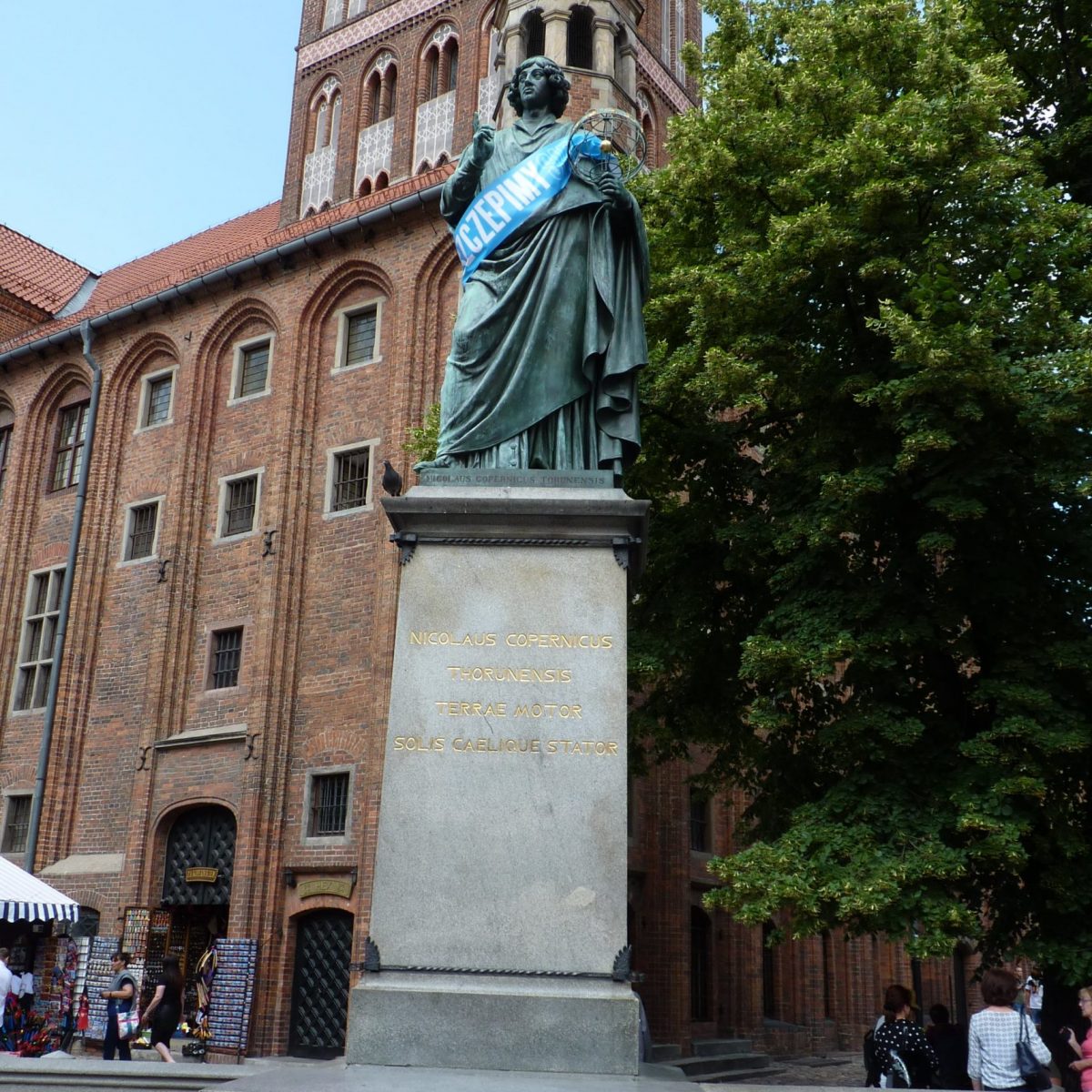 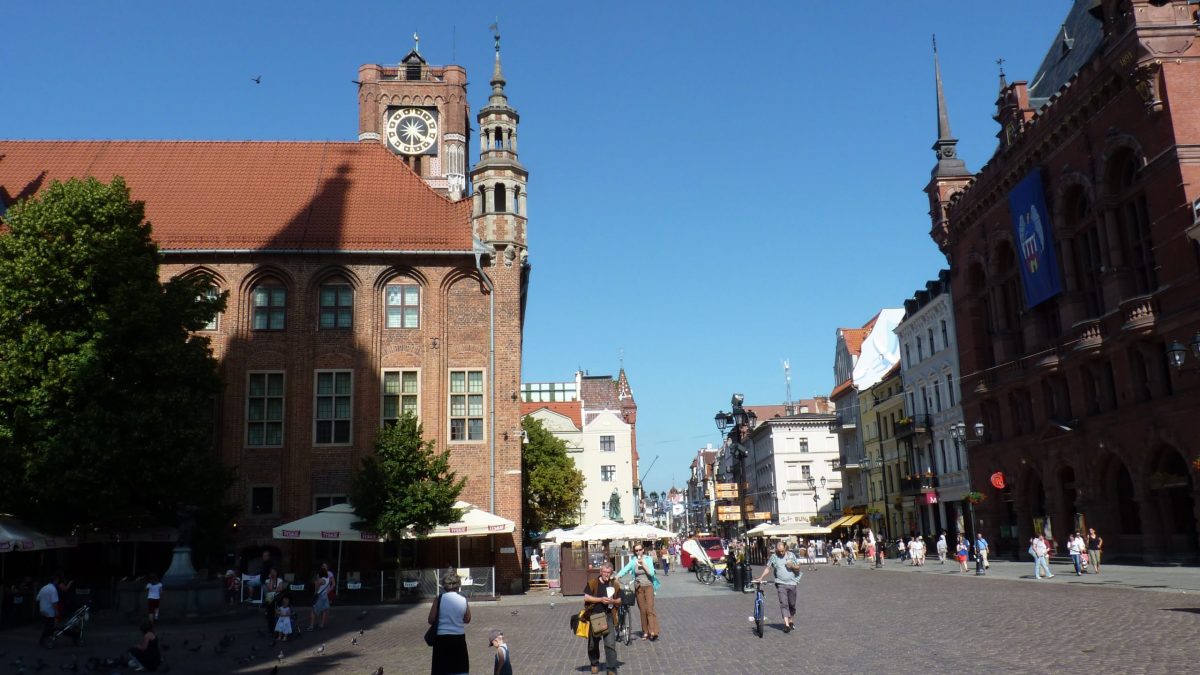 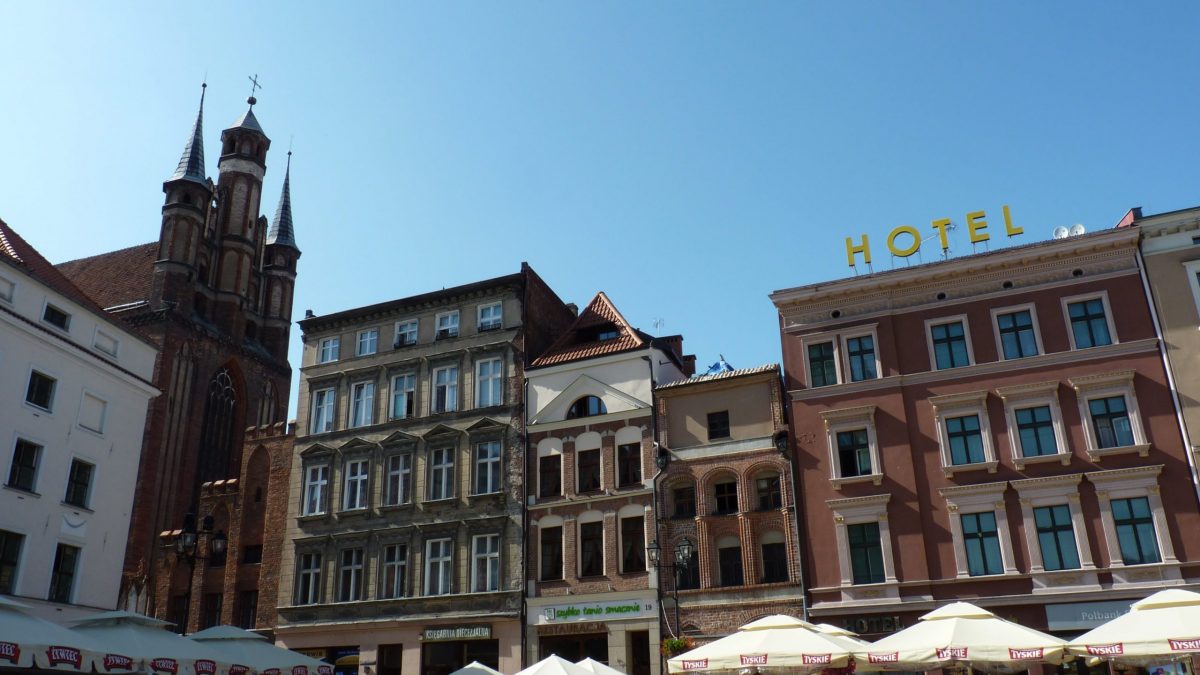 5. Climb up the Town Hall Tower

Dating back to 1274, the Town Hall Tower in Toruń is one of the oldest monuments in Poland. It’s also the oldest town hall tower in Central and Eastern Europe. From the platform located at the top of the tower, at a height of 40 metres, visitors can revel in stunning wonderful panoramic views of the entire Medieval City Complex and other districts.

The construction of the tower was modelled on the Flemish Belfry (Beffroi) market towers, usually built in conjunction with market halls, which are also observation and signal watchtowers. By the mid-thirteenth century, Toruń established close commercial and cultural contacts with the cities of Flanders (mainly Bruges, Ghent, Ypres).

Since 1385-1388, there’s been a clock on the tower which shows the four parts of the world the current time. The two bells inside the tower (hourly and minute) date back to 1728.

The Town Hall Tower is open daily, from 10am-8pm in the summer season.

Check out our video from the top of the tower at the end of this post. 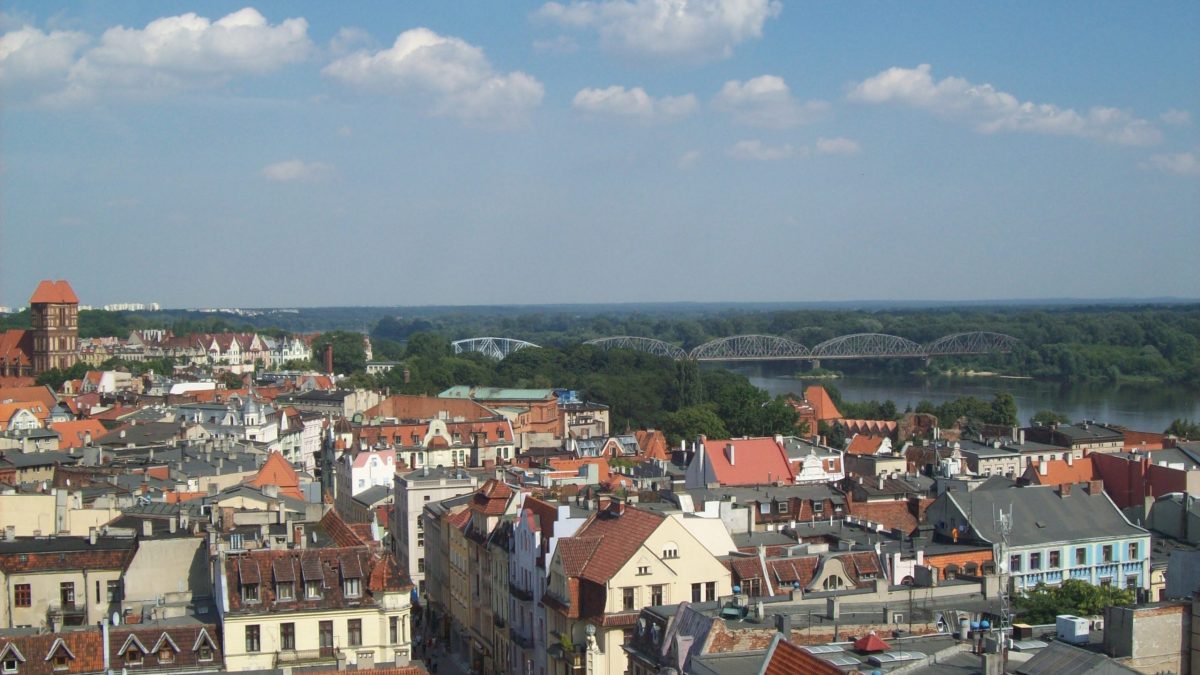 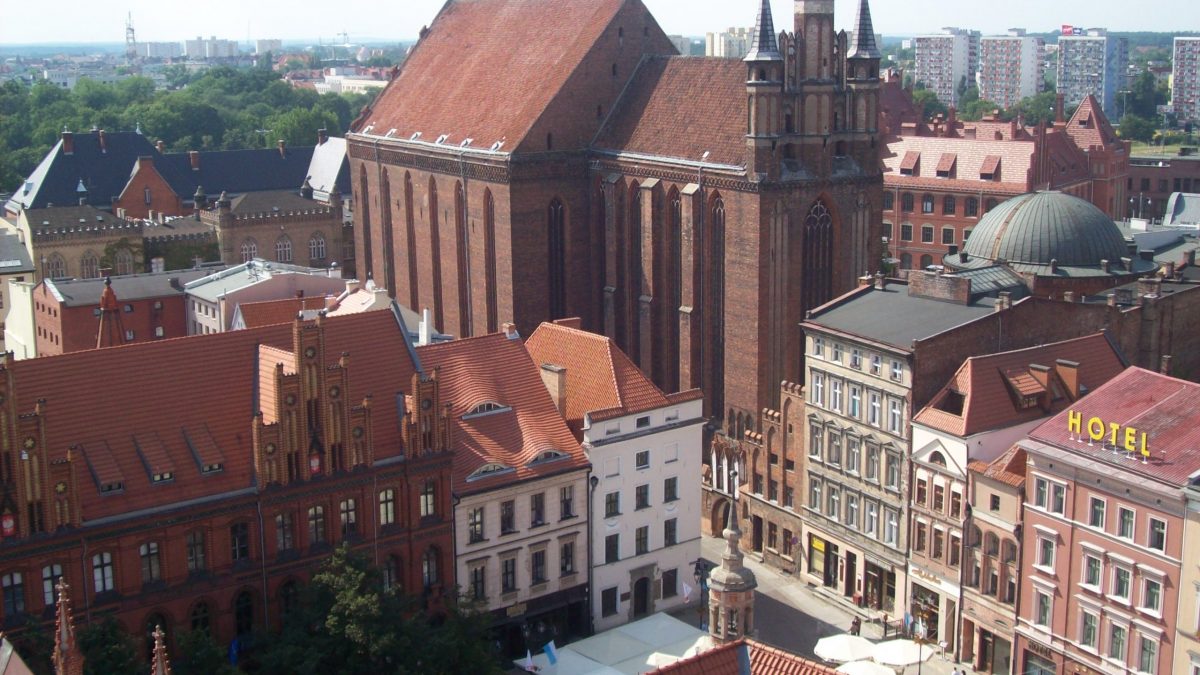 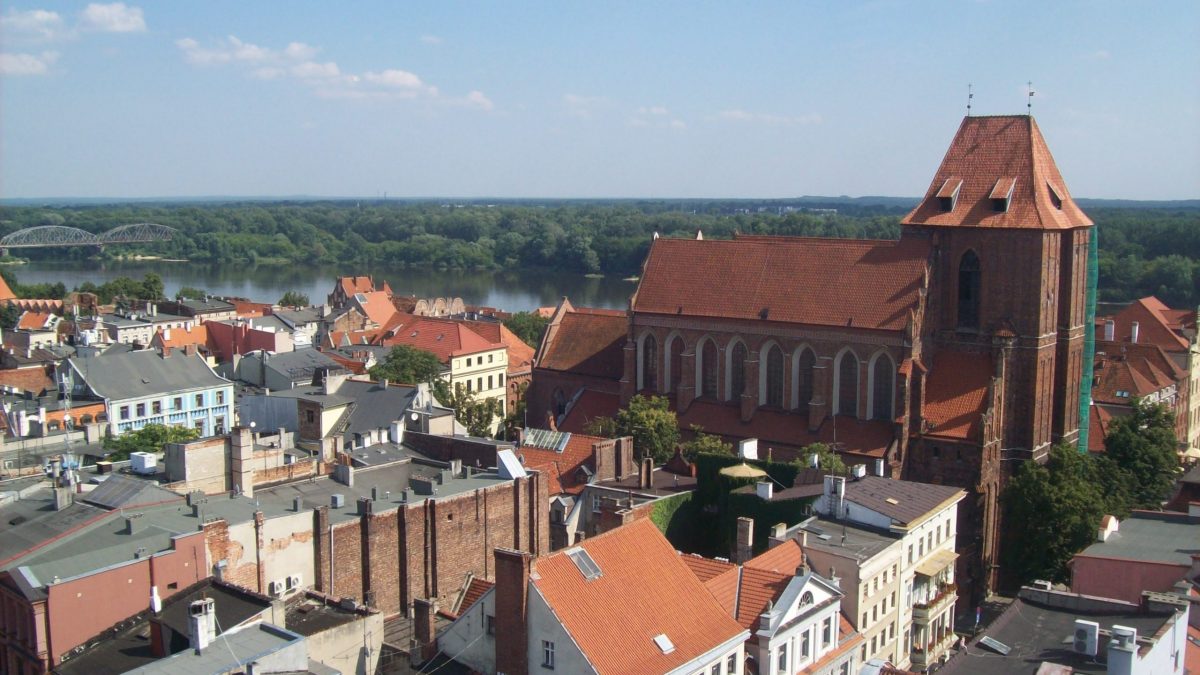 6. Revel in views of the Old Town from the other side of the river

When I arrived in Toruń by train in 2009, I didn’t expect the main station (Toruń Główny) to be so far away from the Old Town.

Indeed, it’s a good 35-minute walk which takes you across Piłsudski Bridge into the Old Town.

Still, beggars can’t be choosers. As it turns out, there’s no more enticing introduction to Toruń than standing on Piłsudski Bridge and taking a few snaps of the Old Town.

For an alternative view of the Old Town, you can go to the Observation Platform – Panorama of Toruń (Platforma widokowa – Panorama Torunia). This is just a short walk down Majdany street, a few hundred metres away from the main train station. 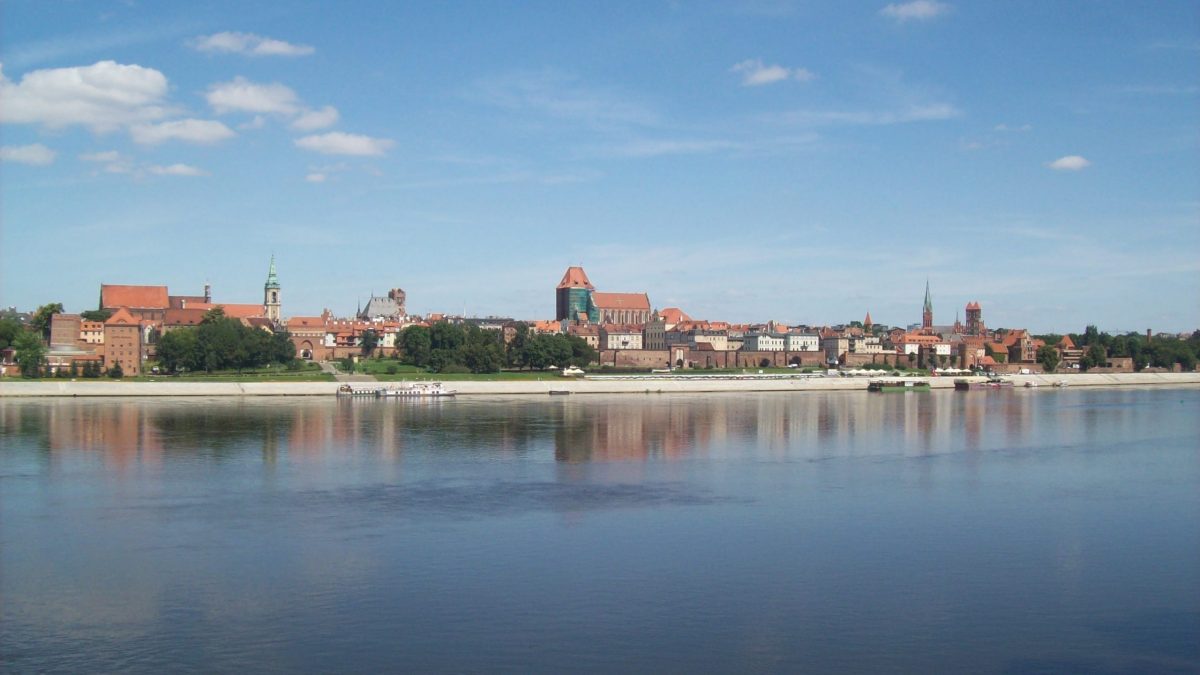 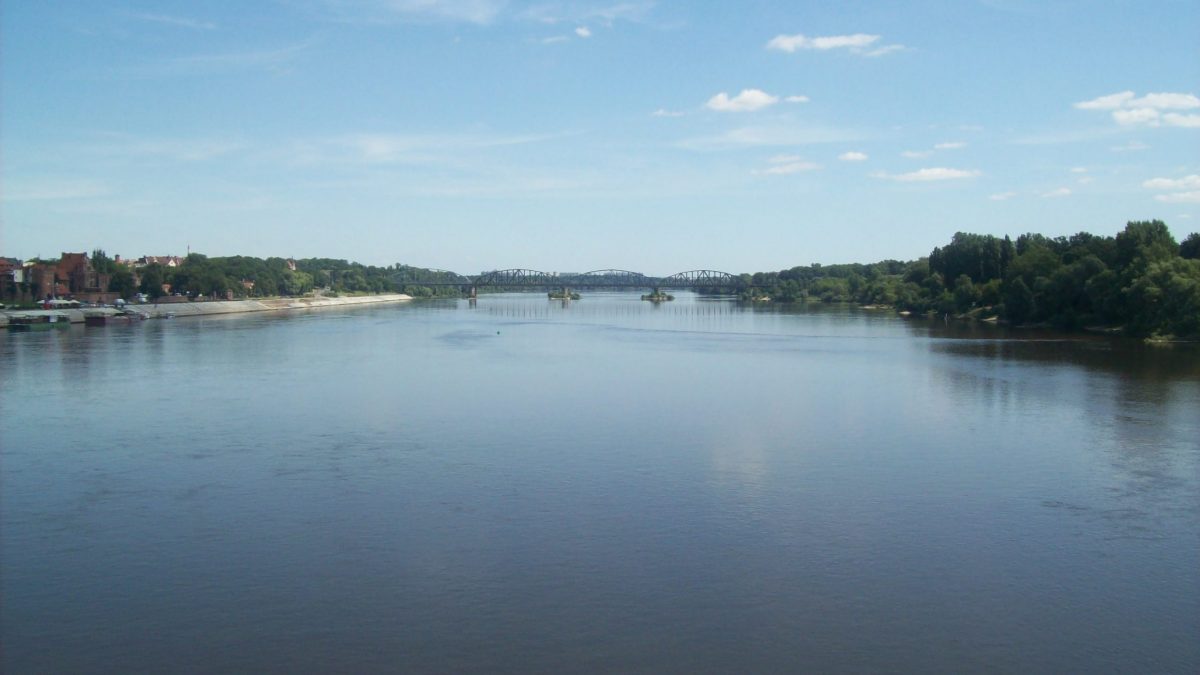 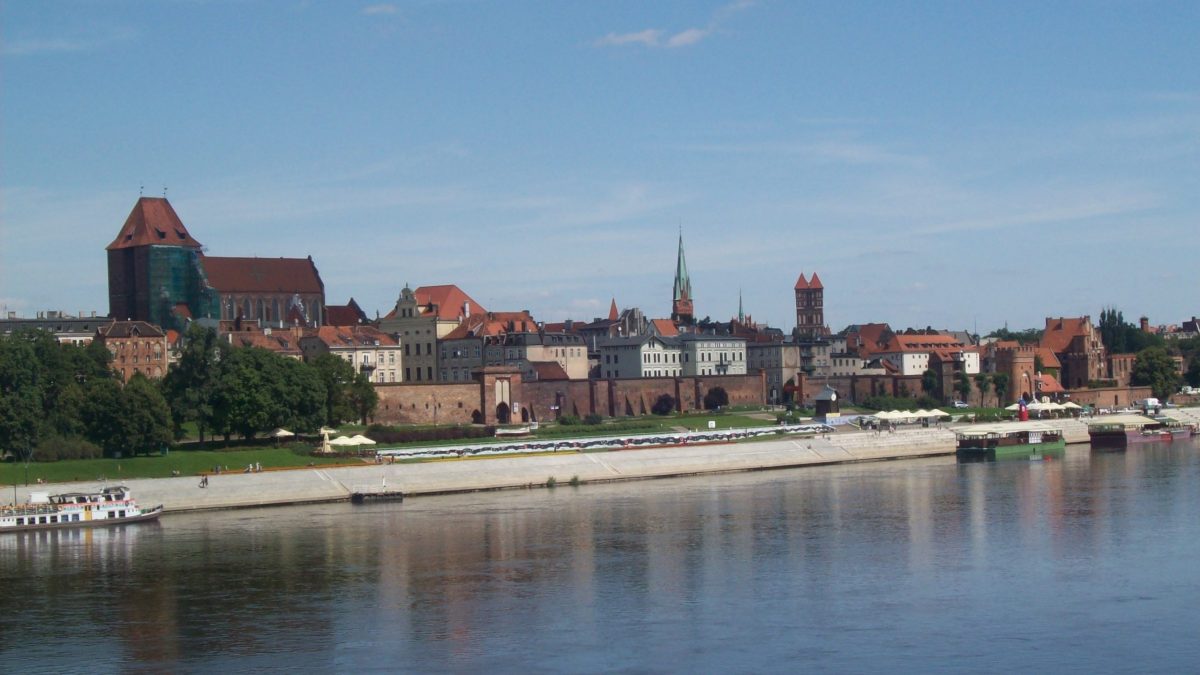 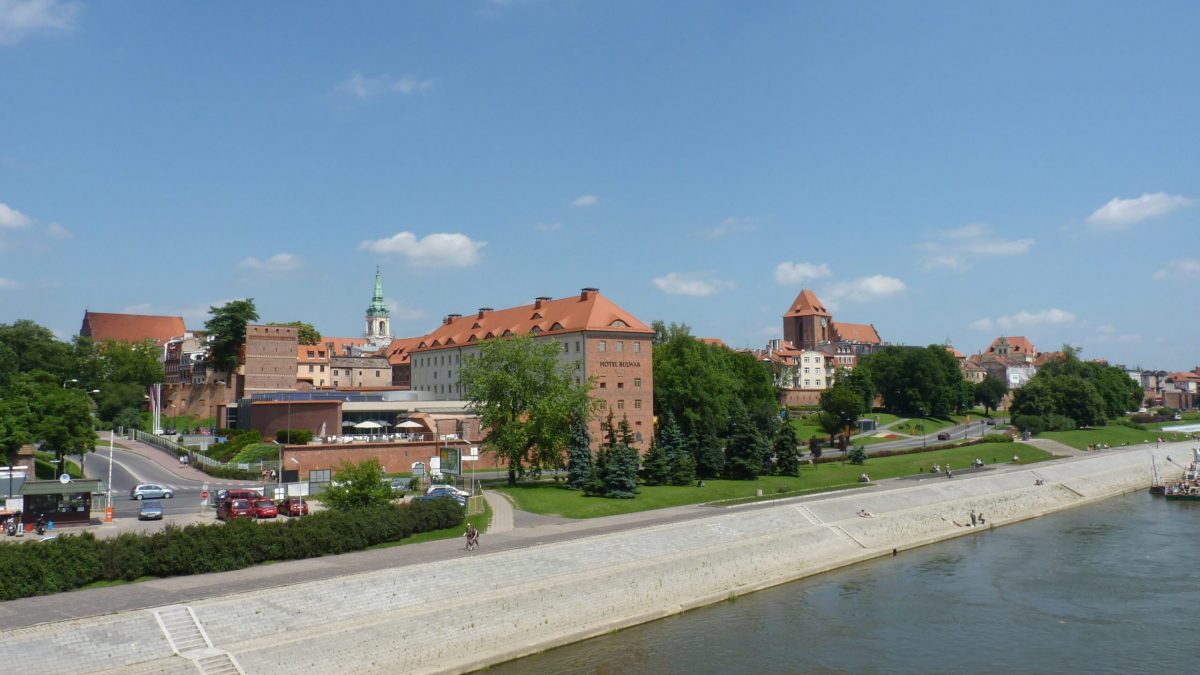 The finest attractions in Toruń – Plenty more to check out

This list of top things to do in Toruń is rather based on my own personal experience in this gem of a city.

I’m not into compiling huge lists of top attractions because other bloggers and travel platforms, such as Tripadvisor, have done all that.

Nevertheless, I could also have feasibly included the following attractions to my list:

And one or two other places.

All in all, Toruń makes for an ideal day trip from Poznań, Gdańsk, Łódź and Warsaw.