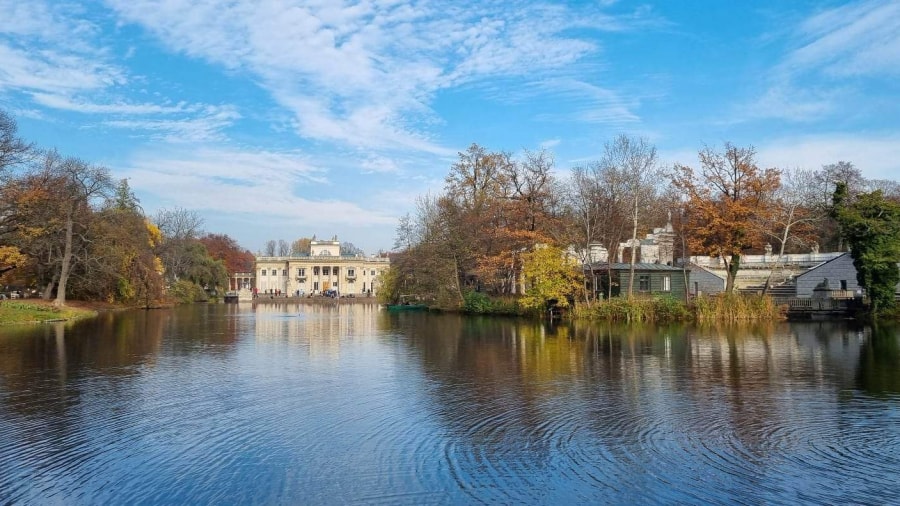 I’ve seen many great sights during the Golden Polish Autumn from 2006 until the present day. Yet, I struggle to recall any finer places to amble around and soak up nature in the autumn months than the Royal Łazienki Park in Warsaw.

Before October 2022, I’d been to Warsaw plenty of times. However, I had never ventured very far from the Old Town and the area around the Palace of Culture and Science.

As things turned out, it was a right royal occasion. My wife and I followed up a visit to Royal Łazienki Park with a final morning sightseeing jaunt to the Museum of King Jan III’s Palace at Wilanów and the surrounding gardens.

The creation of Łazienki Park is most associated with King Stanisław II August (King of Poland and Grand Duke of Lithuania from 1764 to 1795). However, we need to go back further than the late eighteenth century to appreciate the true origins of the Royal Łazienki Park.

The significance of Ujazdów Castle

During the reign of King Sigismund III Vasa (Zygmunt III Waza, 1587 to 1632), the construction of the baroque Ujazdów Castle began in an area neighbouring the modern day Royal Łazienki Park. At the end of the 17th century, Ujazdów Castle, in addition to the wooden lands nearby, fell into the ownership of the nobleman Prince Stanisław Herakliusz Lubomirski.

At the same time, two pavilions were built at the foot of the castle at the request of Prince Lubomirski. These buildings were a Hermitage and a recreational pavilion, which Lubomirski termed ‘the bath’ because it included a dedicated bathing room. Hence, Łazienki Park took its name from this recreational pavilion – łazienki means baths or bathrooms.

In 1764, Prince Lubomirski sold his estate to King Stanisław August Poniatowski for 1.1 million zlotys. Poniatowski was the King of Poland and Grand Duke of Lithuania from 1764 to 1795. The King was on the lookout for a royal summer residence. At first, he considered Ujazdowski Castle. However, the adaptations he introduced to the castle didn’t meet his requirements. Hence, the King shifted his focus to Lubomirski’s Bath.

The Palace on the Isle

In 1772, the King embarked on a series of reconstructions of the Bathhouse with the help of two renowned architects. They were Jan Christian Kamsetzer and Dominic Merlini. Works lasted until the 1790s. As a result, the baroque pavilion became the iconic Classicist Palace on the Isle (Pałac Na Wyspie).

It wasn’t quite a fairytale ending for King Poniatowski. Regretfully, the third partition of Poland meant the King had to abdicate the throne. Stanisław was interned in the town of Grodno. He would never return to Royal Łazienki to witness the outcome of the final reconstruction of the Palace on the Isle. 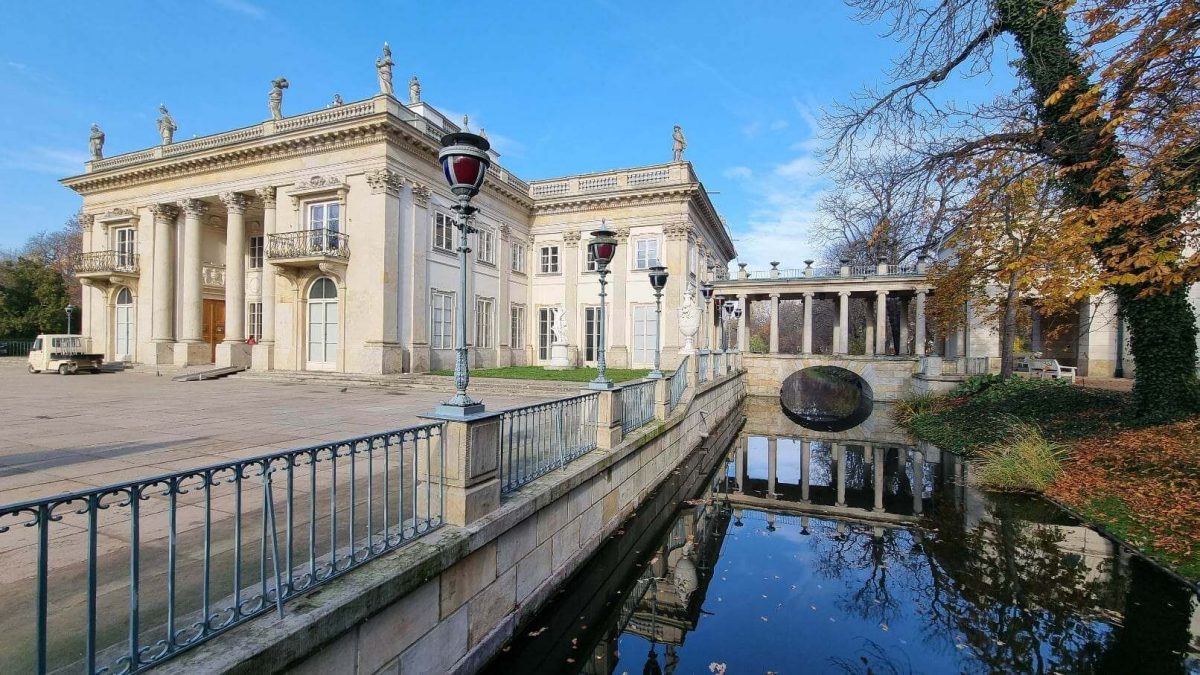 Alongside the expansion of the Palace on the Isle, other pavilions and buildings in the garden were built.

One such example is the amphitheatre, which is situated on the shores of the south pond. Architect Kamzetser designed the building. His work borrowed heavily from the ruins of the Roman Forum as well as the ruins unearthed in the ancient town of Herculaneum.

Accommodating around a thousand spectators, the amphitheatre opened on September 7, 1791. This date was the anniversary of the election of King Stanisław August.

A few hundred metres or so east of the Palace on the Isle lies Myślewicki Palace. It was originally designed for King August, and later handed over to his nephew, Prince Józef Poniatowski.

In the interwar period, one of the apartments was occupied by Deputy Prime Minister Eugeniusz Kwiatkowski, whose bust is located next to the palace. The palace was the scene of some key political events also in the 20th century. For example, between 1958 and 1970, secret Chinese-American diplomatic talks were held here.

Perhaps the most noteworthy event at the palace occurred on August 17, 1989. Lech Wałęsa, Roman Malinowski and Jerzy Jóźwiak concluded an agreement to form a coalition between Solidarity, ZSL and SD. This agreement led to the appointment of Tadeusz Mazowiecki, the first non-communist head of government since the end of World War II.

The White House (Biały Dom) is a classical building erected in the years 1774-1776. In fact, it was the first of King Poniatowski’s buildings constructed in the Royal Łazienki Park.

The building escaped damage during the Second World War, and the rooms have retained their original decor. The White House was opened to the public in 1968.

In 1778, Kamsetzer, once again, marked out the Royal Promenade. This is a wide avenue connecting the White House with the Palace on the Isle.

Known in Polish as Stara Oranżeria or Stara Pomarańczarnia, the Old Orangery was built in the years 1785-1788. The architect was Dominik Merlini.

During the reign of King August, the Old Orangery was used to store exotic trees that decorated the royal gardens in summer.

These days, the building houses the Royal Theatre, one of the rare original 18th-century court theatres in Europe. In addition, the Old Orangery is home to the Royal Sculpture Gallery.

For further information on several more key buildings in the Royal Łazienki Park, as well as the many statues and sculptures in the gardens, check out this page on Łazienki Park’s official site.

Łazienki after the death of King Stanisław August

Stanisław August died in 1798. After his death, the estate was inherited by Prince Józef Poniatowski, and then by his sister Maria Teresa Tyszkiewiczowa.

In 1817, the Poniatowskis sold the residence to Tsar Alexander I of Russia. For nearly a hundred years, Łazienki Królewskie belonged to the tsarist Romanov family.

When the First World War broke out, the Russians did away with most of the works of art in Łazienki. However, the Treaty of Riga in 1921 ensured that they returned to Poland.

During the interwar period, Łazienki Królewskie served as a representative building of the Republic of Poland.

Unsurprisingly, the most tragic period in the history of the Royal Łazienki Park and its architectural wonders was World War II. In 1944, despite the occupiers’ failed attempt to blow up the Palace on the Isle with dynamite, the building caught fire. The fire consumed the first floor, several ceilings and key painting decorations. Fortunately, other buildings, such as the Myślewicki Palace, the White House and the Old Orangery with the Royal Theatre, avoided destruction.

Amidst falling leaves, leaves on the ground and red squirrels tolerant of human presence, there must be few finer things to do in Warsaw than strolling the gardens of the Royal Łazienki Park.

We started our walking tour on the west side of the park, close to the monument to Polish writer, Henryk Sienkiewicz. Very soon, we were in twentieth-century modernist garden territory, nearby the Frederic Chopin Monument.

Walking towards the very centre of the park, close to the Old Orangery and White House, I was overcome by the sheer vastness of the park. This feeling never left me as we roamed around the lake surrounding the Palace on the Isle and on towards the southern part of Łazienki.

I wish my visit to Royal Łazienki Park could have lasted longer. You really need a whole day to take in all of the architecture, the gardens, the monuments and busts, not to mention the museums. 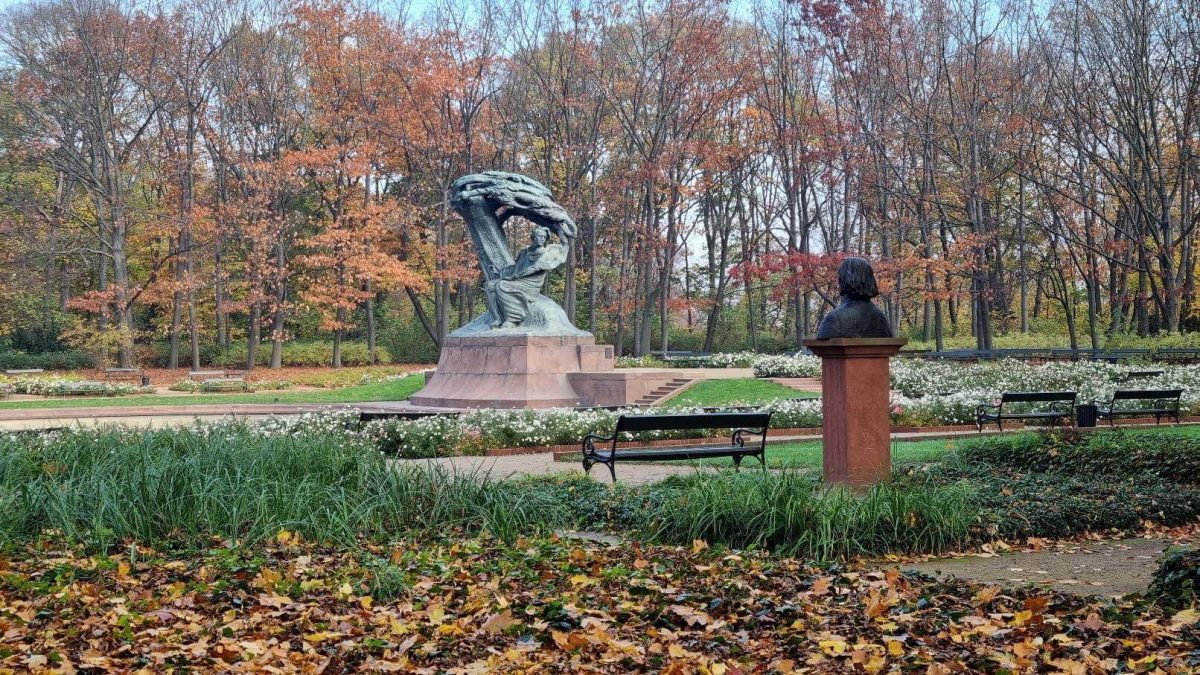 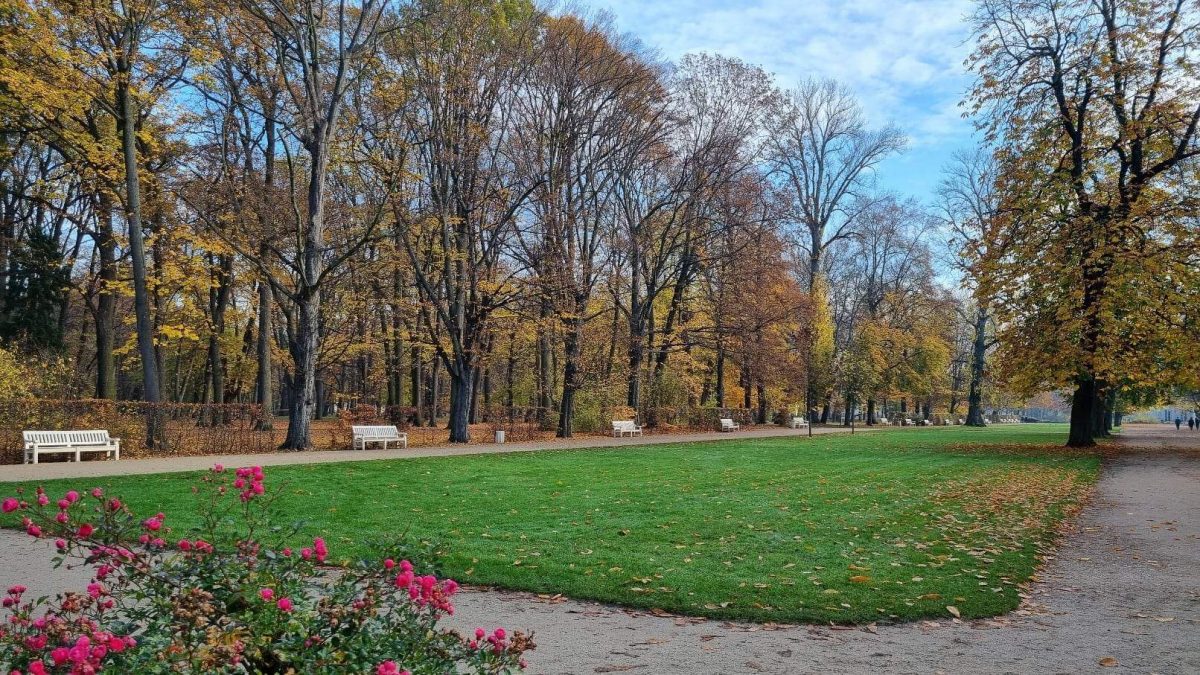 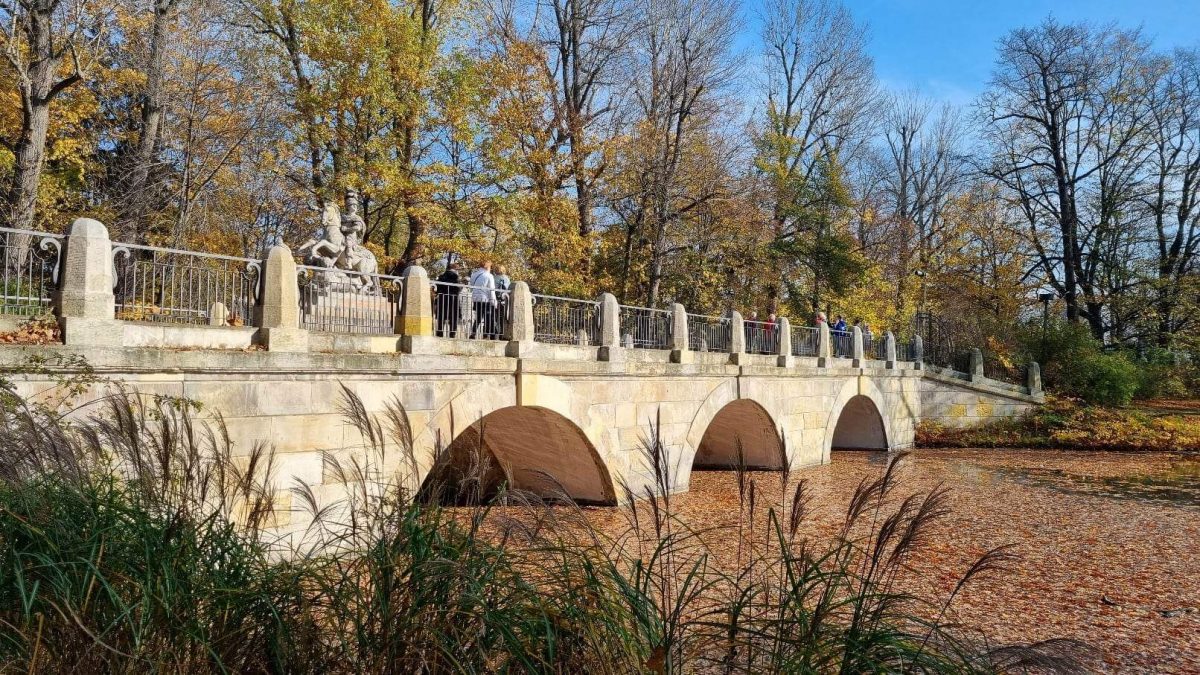