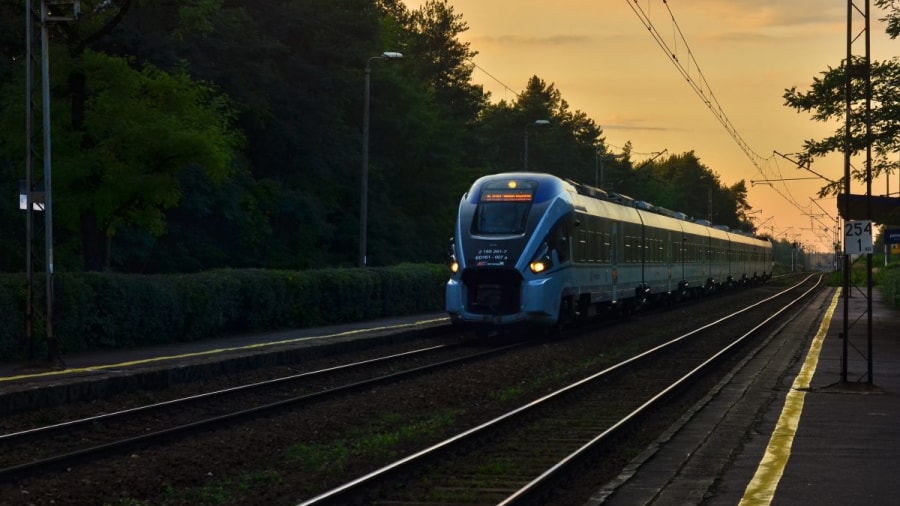 Polish rail travel has come a long way since 2005 – the first time I travelled by train in Poland.

I’d like to say that those were the days. However, Polish rail travel back then was something of a chore rather than a pleasure.

In this post, I describe how PKP Intercity – the  company responsible for long-distance passenger transport in Poland – has developed since 2005. I also share some of my memories travelling on Polish trains. Finally, pictures from the modern Express Intercity Premium (EIP) category of trains add some visual spice to the post.

The first time I travelled by train in Poland was from Gliwice to Wrocław in the summer of 2005.

My friend Paweł drove me from his quaint southern Poland village of Mszana Dolna to the Silesian city of Gliwice. From there, I caught a train to Wrocław to stay with some people I’d met on my journey over to Poland.

Coincidentally, it was in 2005 that PKP Intercity witnessed some of its most noticeable developments as a company. Indeed, the company signed a credit contract with the European Investment Bank to the tune of EUR 50 million to finance the purchase of modern rolling stock.

In 2005, PKP Intercity oversaw the development of its Twoje Linie Kolejowe (TLK) brand. TLK trains are still in operation. As I remember them, TLK trains were not much slower than the Intercity (IC) trains. However, they were much less comfortable, looked dirtier and were cheaper. The chances of coming across unsavoury characters, football hooligans and alcoholics was much higher on TLK trains.

I can safely say that the situation is much different now. Any hint of anti-social behaviour tends to be nipped in the bud quite swiftly by rail officials.

So, I tended to travel on TLK trains. My most frequent journey was from Dębica to Kraków. On this particular route, things haven’t changed much. Even the journey times and prices are still very similar to what they were back in 2005:

I sometimes had to stand in the aisle in TLK trains because they were so overcrowded. This was often the case before public holidays. The situation on TLK trains may still be quite similar now. However, making a seat reservation in a first-class compartment can reduce the possibility of having to stand in a second class carriage. Travelling first class never used to appeal to me as I didn’t mind standing for a few hours. Besides, I only remember a few occasions when I had to stand.

TLK trains provide compartment-carriages with eight seats. It can make for quite an intimate atmosphere when you’re in a tight compartment with other people. Frankly, I never minded this as it gave me the incentive to strike up conversations with other passengers to pass the time.

Polish rail travel is on a roll

Here’s a summary of just a few of the major improvements Polish rail travel has seen since 2009:

One more improvement to mention is the impressive clarity of the PKP intercity online ticket sales system, as I discuss here.

In 2011, Intercity signed a contract with the French multinational company for the delivery of 20 Pendolino trains. The deal was worth EUR 665 million.

Manufactured by Alstom, and first launched in Italy in 1976, Pendolino is a high-speed tilting train. On conventional tracks, Pendolino can reach speeds of up to 250km/h, thus the need for specially laid tracks is eliminated.

In Poland, Pendolino trains typically run at 160 km/h. This is certainly true for the Warsaw-Gdynia route. When I travel between Warsaw to Gdańsk, the speedometer tends to hover at around 157-159 km/h.

I’ve just come across an article which cheered me up no end. PKP ran a test train at 200 km/h on the Warsaw-Gdańsk railway line overnight from 11 to 12 January. The current three-hour journey is no disgrace, but it can drag on a bit.

On EIP Pendolino trains, all passengers are entitled to a free cup of tea, coffee or bottle of water. There’s also a dedicated Quiet Zone covering the whole of carriage number seven (second class) on each EIP train. I haven’t reserved tickets in the Quiet Zone yet, but I’m sure that I will in the future.

A peek inside a Pendolino train

In 2006, the Polish rail travel experience was typified by eyesores like this:

Need I say any more?