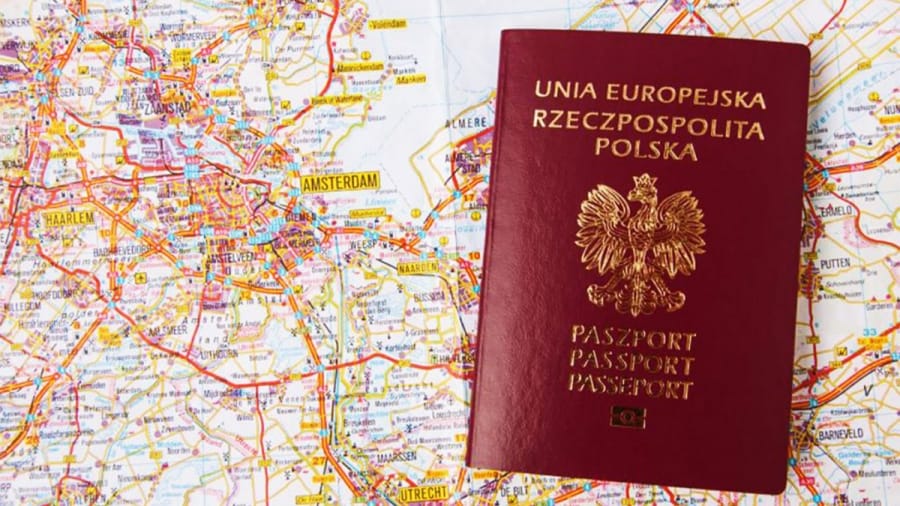 This post might be particularly useful for British people with Polish ancestry who wish to maintain the privileges connected to possessing an EU passport.

Who has a right to get Polish citizenship by descent?

Polish citizenship is obtained by “right of blood”, and is passed from parent to child automatically at birth, regardless of which country a child is born in. If you have a Polish ancestor somewhere in your family line, you most likely qualify for Polish citizenship. Some cases are really straightforward and people receive their confirmation of citizenship and passport within a few months.

I did not possess two of my grandfather’s vital records – his passport and birth certificate. Hence, I was a little nervous at the start of the application process. However, there are plenty of alternative documents to trace. Barring a few bureaucratic blips from one or two institutions, my case turned out to be quite a straightforward one.

At the beginning of December, 2017, I began to make plans with my wife to move to Poland. Hence, gaining Polish citizenship by descent through Lexmotion was my main goal. Having a Polish passport was just a bonus for me.

Anyhow, I started to become quite involved in the process of creating my family tree and learning about my roots. I even went to the lengths of hiring an archivist to find out some more information about my grandfather. This archivist inadvertently discovered some things about grandfather’s siblings and my great-grandparents.

I found out that my grandfather was born in a village called Bojary, now in modern-day Belarus. Bojary was in former Polish territory of course. After some manic zooming in on Google Maps, the name of the village eventually appears.

Concerning my eligibility for Polish citizenship, Lexmotion put the following questions to me in order to carry out a free eligibility check:

I spent a few weeks corresponding with Lexmotion as I had plenty of questions. Eventually, the following news reached me via email:

I am pleased to inform you that based on the information you have provided you (and your siblings, children) can apply for the Polish Citizenship Certificate (provided you or your ancestors did not renounce Polish citizenship).

Which documents are required to get Polish citizenship by descent through Lexmotion?

Lexmotion then asked me to track down documents which proved “right of blood”. Here is the email they sent me with a list of potential documents:

To get Polish Citizenship Certificate we have to prove that your ancestors were Polish citizens. It is very important, therefore I kindly ask you to send us scanned copies of Polish documents which you possess, especially:

Further information prepared by Lexmotion concerning the documents required to obtain Polish citizenship can be found here and here.

As previously mentioned, I didn’t have a copy of my grandfather’s passport and birth certificate. However, I was able to get a copy of his Death Certificate (Akt Zgonu) from the district in London in which he died.

At the start, I was afraid that I would fail with my application because I was thin on documents. Rather desperately, I asked Lexmotion whether they were able to trace copies of vital records in the appropriate Belarusian archives. Understandably, they were not able to fulfil such a request.

Was your grandfather in the Polish Army under British command?

If a Polish citizen fights for an army of another country, they automatically lose their Polish citizenship. However, things become a little trickier when it comes to the Second World War. Many Polish soldiers who were in the UK during the War fought in the Polish Army UNDER BRITISH COMMAND. Even though Polish soldiers fought alongside British soldiers under British command, they were still classed as being in the Polish Army! This knowledge became my saving grace. The documents that came through in the post proved that my grandfather did indeed fight under British command. Technically, he never “left” the Polish Army.

How can you apply for a relative’s Polish military records in the UK?

Regarding the process of applying for a relative’s Polish Military Records in the UK, they are held by the Ministry of Defence (MOD) at this address:

I dealt with a lady called Margaret Goddard via telephone – a very helpful and kind soul.

When you write to the MOD to request your relative’s military records, you will need to include some proof that you are related to the Polish ancestor in question.

I ended up sending a picture of my grandfather’s grave to Mrs Goddard via email. This was because I didn’t have his birth certificate, and I was still waiting for a copy of his death certificate. I applied for the documents just before Christmas, 2017, and received them just after the new year.

I had little doubt that The Polish Enquiries team at RAF Northolt were handling hundreds of similar cases to mine at that time. For my own peace of mind, however, I sent them an example document, which my lawyers sent to me, to make sure I’d get it in writing that my grandfather did not serve in the British Army. Take a look at this: 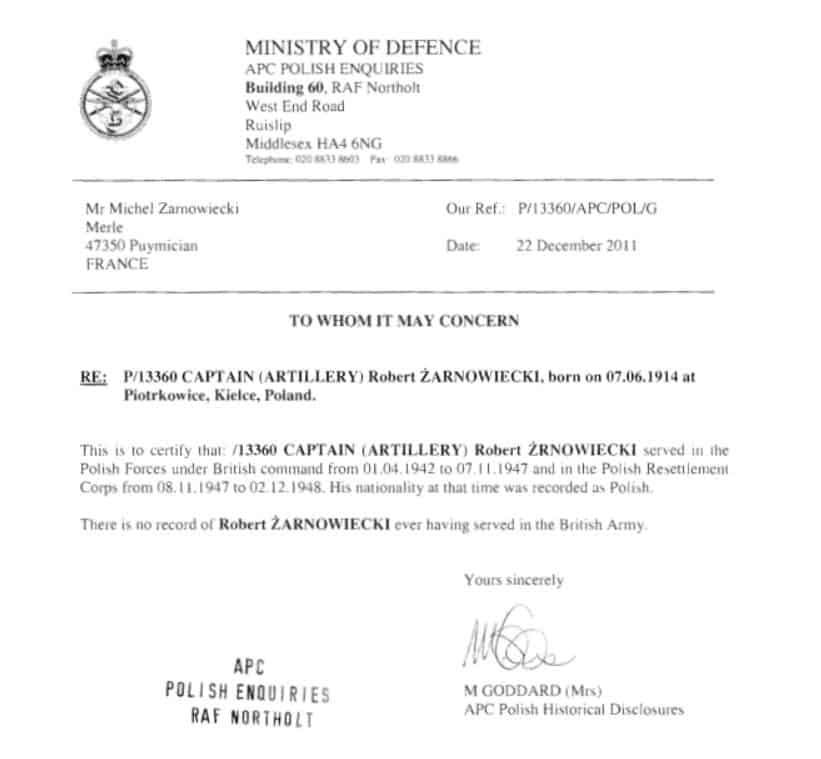 If the people at RAF Northolt cannot do much for you, or you would like to track down a more exhaustive set of military records, a list of other institutions and their address can be found here.

The National Archives in Kew, London

The main stumbling block in my application was getting a document stating that my grandfather did not acquire British citizenship. This is called a “Letter of no evidence”, and can be obtained from the National Archives. It is a crucial document, as my lawyers pointed out:

The Polish authorities have to know whether your grandfather was a British citizen or not. We have two options:

We can show them the naturalization certificate,

OR we can show them a document stating that your grandfather didn’t acquire British citizenship – please see an example in attachments.

Both documents are issued by the National Archives. As far as I know they are very cooperative and our previous clients got certificates within 2-3 weeks.

The National Archives found a possible entry for my grandfather using the details I provided. Unfortunately, there was another person with the same name as my grandfather’s. This person was naturalised as a British citizen in 1949, as the Archives pointed out:

Thank you for contacting The National Archives of the United Kingdom.

Unfortunately we are unable to issue a letter of no evidence because we have searched and found a possible entry for the details you have provided for XXXXXXXXXXX.

To try and tell if this entry relates to your query we will need to research using the original records – this takes more time and means we have to charge you.

Could you please let us know if you would like us to carry out further research?

Before we start any research we will write to you to explain our charges. When we receive your payment, we will carry out the search and, if we find the information and can make it available, we will provide it to you.

So, I made the payment for the Archives to carry out a search. A “Letter of no evidence” soon reached me in the post. It was good news. The letter confirmed that they did not have a record of my grandfather becoming British by naturalisation. See this extract:

Unfortunately, the Archives sent me an unsigned letter, which the Polish authorities would not accept. I became mightily agitated. I had to write to the Archives once more to send me a signed letter. The letter arrived a few weeks later.

The GOOD news for those with relatives who became “naturalised” in other countries:

* Polish citizens obligated for military service in Poland (i.e. men between the ages 18 – 50) did not lose their Polish citizenship after they emigrated to another country, and subsequently became citizens through naturalisation, if they were not permanently released from military duty by the Polish Government. In practice, this almost never happened.

Do you need to hire a law firm to help you get Polish citizenship by descent?

It is not necessary to employ a lawyer or law firm to apply for Polish citizenship. However, I would recommend it. I had quite a few setbacks, worries and queries throughout the application process. It’s always better to have an experienced legal consultant at hand to allay your fears and set you on the right track again.

Obtaining Polish citizenship by descent through Lexmotion is an educational and stress-free experience.

I was ecstatic when news came through via email that my birth certificate and marriage certificate had been processed. It was only a matter of time before I would get my citizenship certificate. When the citizenship certificate came through, my lawyers informed me that they would be able to send out the original certificates via courier to my UK address. They also filled out the forms for me to get my Polish passport and PESEL number. This is an eleven digit national identification number which all applicants for a Polish passport must apply for.

Lexmotion has been operating since 2006.

I went to Lexmotion’s office in Kraków in 2018. I met some of the consultants and they were all very courteous. All in all, Lexmotion’s consultants are just regular people trying to do a good job.

You’ll be in very safe hands if you decide to get Polish citizenship by descent through Lexmotion.