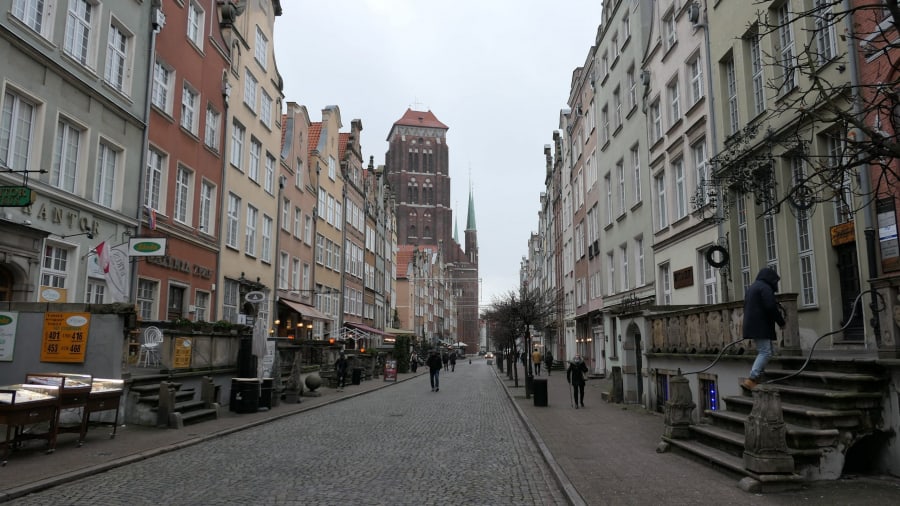 It was a cold winter’s day when my wife and I took to Ulica Piwna in Gdańsk to make a short recording for Poland Walking Experiences.

Obviously, there wasn’t the usual summer bustle and jolly atmosphere. Nevertheless, we were still able to capture the essence of Ulica Piwna – excellent architecture, coloured buildings and the imposing presence of St. Mary’s Basilica.

A brief history of Ulica Piwna

Piwna Street exists as a curved road in documents from the 14th Century.

In the 15th Century, a division of the street was made. The lower part became Chlebowa Street, currently known as Chlebnicka Street, while the upper section became Jopejska Street, named after the Jopen beer produced by brewers living on that street.

These days, the magnificent Grand Armoury stands at the far west end of the street. Constructed in the years 1602-05, the Grand Armoury was a working arsenal until the 1800s. The well-like structure in front of the building was used as an elevator to transport gunpowder and ammunition from the basement to ground level.

The most eminent citizen of Gdańsk living on Ulica Piwna was the architect Jan Strakowski (born in 1567).

Strakowski authored the stonework of the Old Town Hall and the Great Armoury. He also worked on the reconstruction of the foregate on Ulica Długa – Gdańsk’s most famous Street. After returning from abroad, where he studied the construction of fortification systems, he designed, built and rebuilt several gateways in Gdańsk.

Another prominent citizen who lived on Ulica Piwna was Jan Karol Schultz. He was born in building number 25.

Schultz, a famous painter who graduated from the Gdańsk School of Art, contributed to the renovation and reconstruction of monuments destroyed during the Second World War. His paintings, which depicted the streets of Gdańsk, helped to restore the urban landscape to its former self.