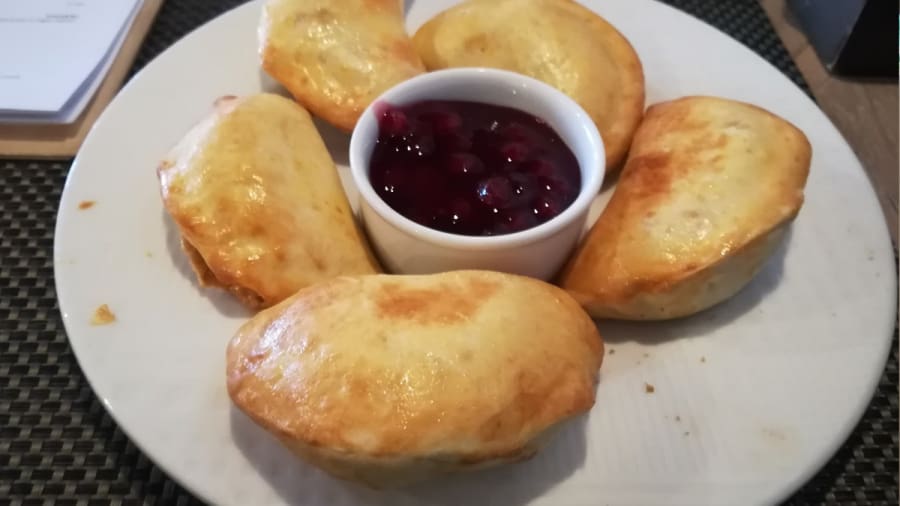 Pierogi restaurants in Poland are ubiquitous. However, finding a pierogarnia with such an appetising and varied menu as that at Pierogarnia Mandu is quite a challenge. Quite frankly, Pierogarnia Mandu’s menu is in a league of its own.

Mandu has two locations in Gdańsk. The first is on Elżbietańska Street close to Gdańsk Główny train station. Meanwhile, the other Mandu restaurant is just a few hundred metres away from Oliwa Park. What better way to spend an afternoon in Gdańsk than by combining lunch in Mandu with a walk around Oliwa Park.

Anyhow, a visit to Mandu’s city centre restaurant is the focus of this post. 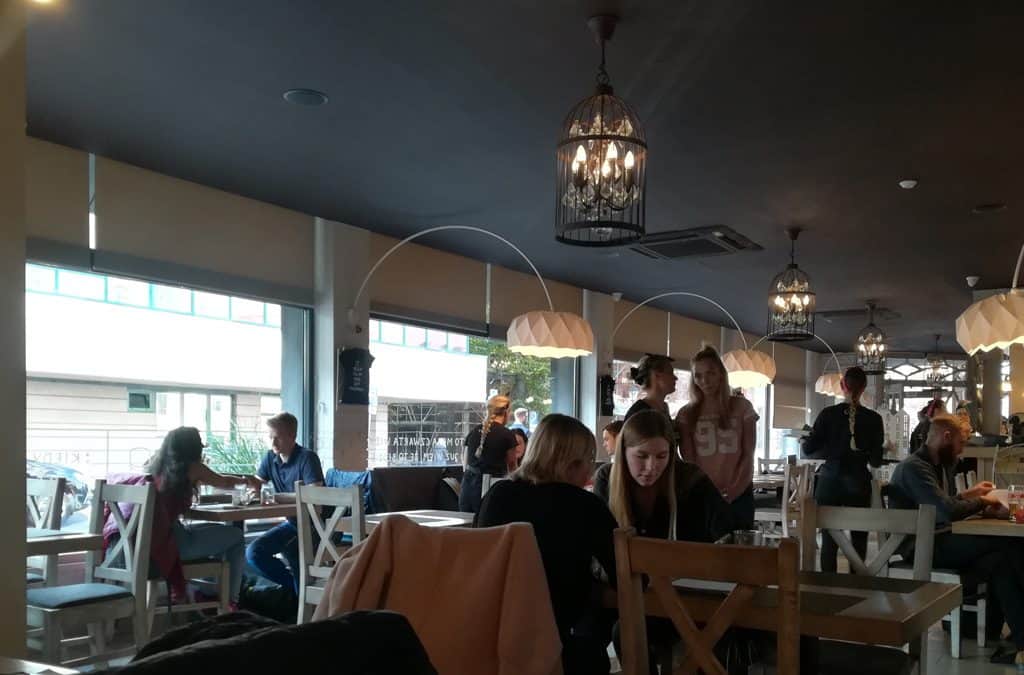 My wife and I walked past Pierogarnia Mandu several times in August. On each occasion, there must have been twenty-five people queuing outside to get a table. The menu is made fresh to order. Therefore, I imagine that many of those souls in August must have waited over two hours to get a table. It is possible to make a reservation. However, as Mandu’s website states, it’s sometimes not so easy to make a reservation due to the constant crowds.

In terms of incurring a hunger-filled wait, my wife and I never had such issues. This was a chilly early October day. There were only two people in front of us waiting to enter and they soon entered once some other people left. I was pleased to see a nice fellow with a clipboard adding people’s names to a waiting list. Professional and orderly indeed.

Regardless of the weather and which season it is, Mandu is always busy between 12pm and 3pm. The difference between peak tourist season and a cold February day is rather in the waiting time to get a table. 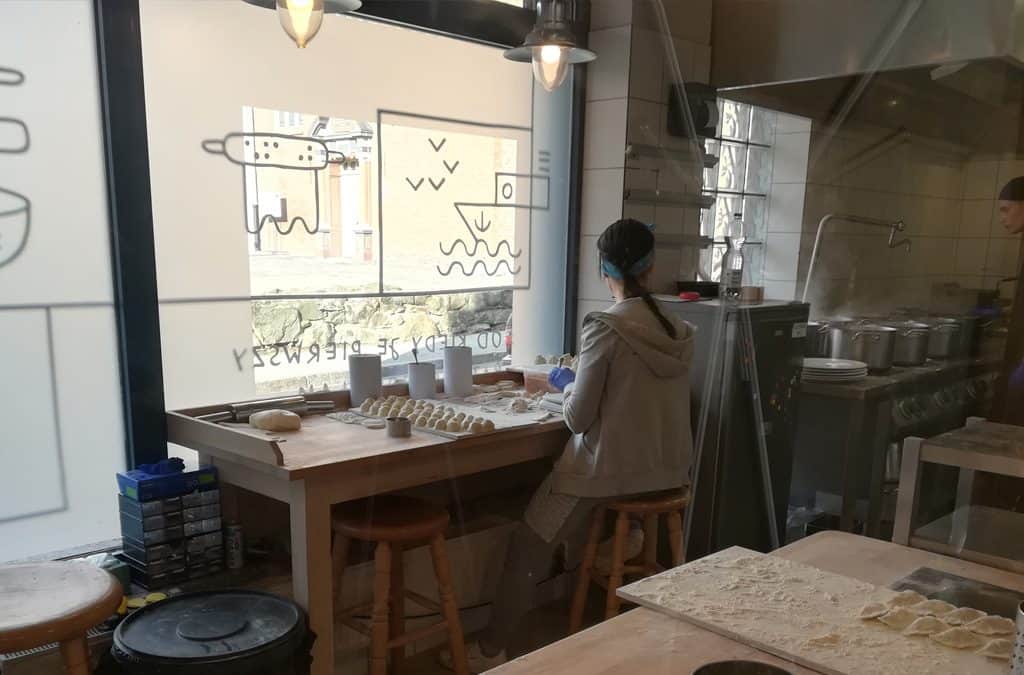 For those without a plan, it can be quite a task for visitors to navigate their way through Mandu’s scrumptiously enticing menu.

Got a sweet tooth? No worries. There are chocolate pierogi with oreo served with sweet cream, baked banana and chocolate cream pierogi. What about pierogi containing blueberries topped with sour cream?

There are also pierogi from different parts of the world, as well as several vegetarian and vegan friendly options. Frankly, the pierogi with carrots and peanut butter served with fried onion sound tempting as a vegan option.

Pierogarnia Mandu’s menu has the variety to satisfy everyone’s palate. 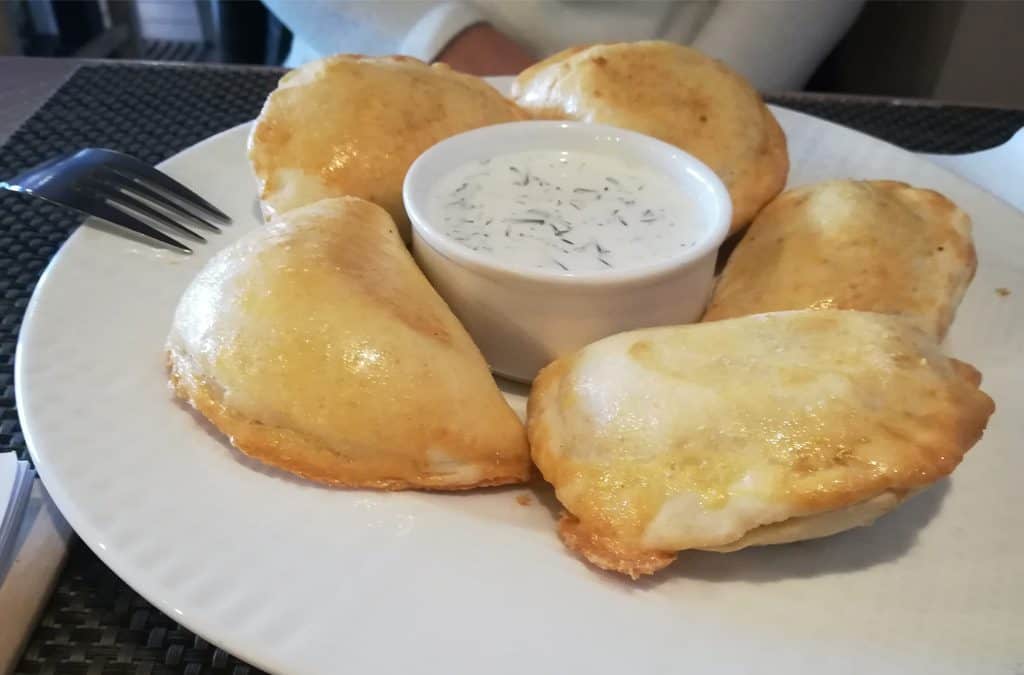 When my wife and I visited Łódź in early 2019, we both tried baked pierogi for the very first time at a restaurant called Pozytyvka. I was completely blown away.

In my view, eating baked pierogi is a whole other eating experience compared to eating traditional boiled pierogi. Fried pierogi are great, but do not come close to the baked version either. Therefore, my wife and I had nothing else in mind but to attack the “Dumplings from light yeast dough from the oven” section of Pierogarnia Mandu’s menu.

It did not take us long to plump for the following choices:

I am not surprised that the “bamboo shoots” option comes first in the baked pierogi section. Visitors will be drawn to it due to the sheer number of ingredients included. Honestly, the combination of flavours did not leave us disappointed. The beef pierogi were also tasty, but I would go for the chicken ones every time.

Baked pierogi at Mandu come served with one of the following sauces of your choice:

We went for dill and cranberry. Dill goes with just about anything, and we found it complemented the chicken pierogi very well indeed.

In case you’re wondering whether five baked pierogi are enough, they certainly will be. Both my wife and I felt full after eating four.

To round things off, the kind waitress packed up the two pierogi we didn’t eat, thus solving our supper conundrum that day. 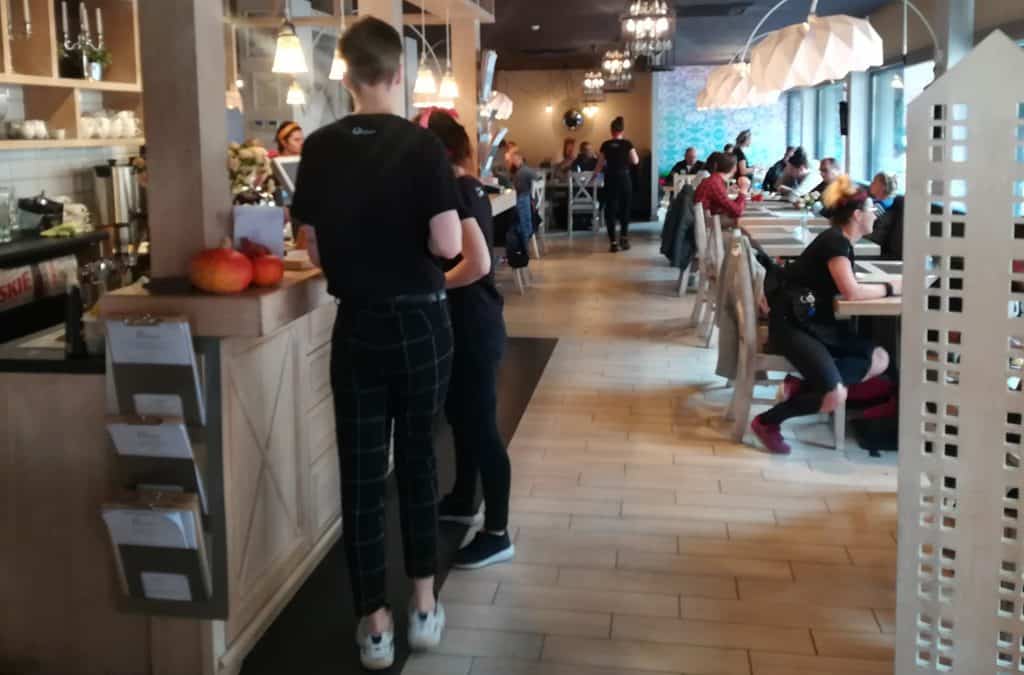 Despite the crowds, everything appeared to be under control. Most of the members of staff are young females in their late teens or early twenties. They all appeared to be eager, helpful and well-trained. We had a cracking little waitress who spoke very good English.

Pierogarnia Mandu is always full at lunchtime. They could probably fit another twenty people into the restaurant if they wanted to. Nevertheless, the layout of the tables enables you to sit and have a meal in relative peace without other people gawping at you.