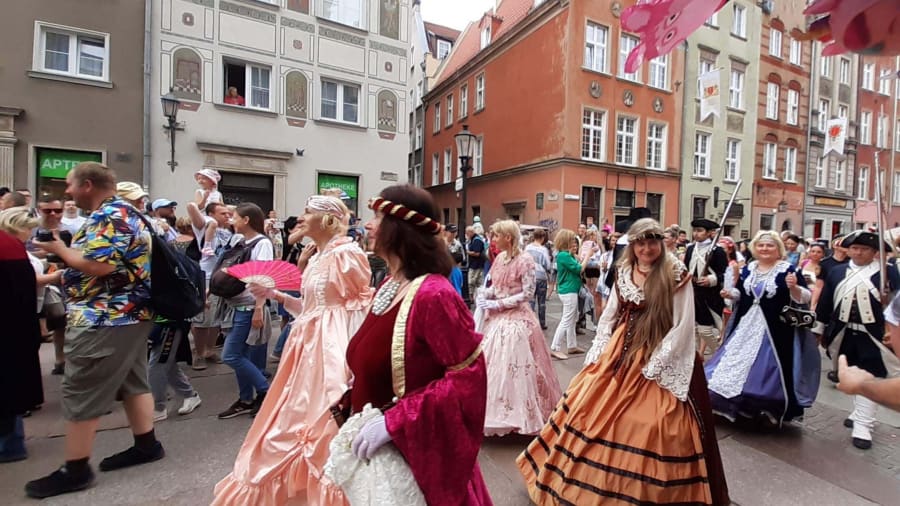 It was with tremendous pleasure and pride that I was able to attend the opening ceremony of St. Dominic’s Fair in Gdańsk in 2022.

As one of the biggest trade and cultural open-air events in Europe, the tradition of St Dominic’s Fair goes all the way back to 1260.

The tradition of the opening ceremony of St. Dominic’s Fair

The opening ceremony of St. Dominic’s Fair takes place on the porch leading up to the Artus Court. Constructed in the years 1348-1350, the Artus Court was once a meeting place of merchants.

To get the best view of the ceremony, I stood on the porch of a building opposite the Artus Court on Długi Targ Street.

The beginning of the Fair was announced by all the church bells in Gdańsk ringing at noon.

Later on, Deputy Mayor of Gdańsk, Piotr Grzelak, handed over the symbolic key to the gates of Gdańsk to Paweł Orłowski, vice-president of the Gdańsk International Fair.

The fair officially gets underway with a bugle call, to which one note is added every year to mark the number of years the fair has been running in Gdańsk. Hence, 762 notes accompanied this year’s opening ceremony.

When all was done on the porch of Arus Court, a colourful parade ensued. It passed from the Neptune Fountain and proceeded along Długa Street. The parade then moved along the streets of the Main and the Old Town, finally ending up at Heweliusz Square right next to the Amber Museum.

Artists belonging to the Gdańsk Archipelago of Culture theatre put on a colourful and captivating parade.