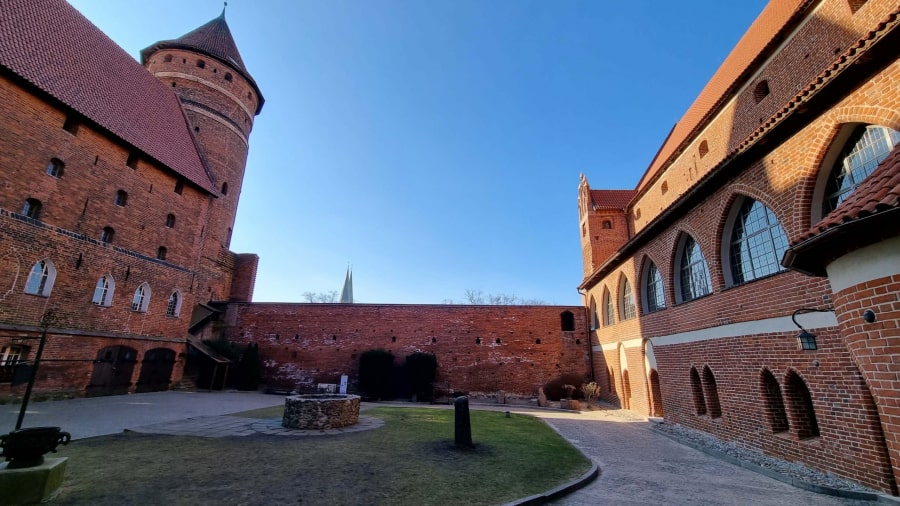 Olsztyn Castle is a Brick Gothic castle located in the centre of Olsztyn in northern Poland.

Officially called the Castle of Warmian Cathedral Chapter in Olsztyn (Polish: Zamek Kapituły Warmińskiej w Olsztynie), the Castle is not large. Nevertheless, the sheer weight of history behind Olsztyn Castle, not to mention its air of grandeur, more than make up for its size.

A history of Olsztyn Castle

The presence of a castle in a town is a sign of fealty – an oath from a vassal or subordinate to the Lord of the Manor. In Olsztyn, the ‘overlord’ was the Cathedral Chapter in Warmia, founded by Anselm, the first Bishop of the diocese in 1260. The Chapter had several significant rights, including the right to elect the Bishop from among the canons.

The feudal Castle of Olsztyn did not constitute part of the town itself. Its function was to protect against enemies from the outside, as well as possible discontent among its own subjects/vassals.

There are no records in the chronicles of any noteworthy conflicts arising between the inhabitants of the castle and the townspeople. Hence, it’s perhaps surprising that the bridge leading from the town, over the moat, wasn’t built until as late as 1758.

Establishment of the Castle

Olsztyn Castle wasn’t intended to be an actual residence for the Chapter. Instead, the Chapter wished to have an administrative centre for overseeing its own interests during the settlement process in this part of Warmia.

During the mid-14th century, the Chapter didn’t hold any notable defensive aspirations concerning the building of the Castle. This is because the area was no longer under threat from the Lithuanians. In contrast, the Chapter’s primary objective was to demonstrate its feudal grip over Olsztyn.

Olsztyn Castle was never directly in the hands of the Teutonic knights. Nevertheless, Warmia was politically dependent on the Teutonic Order. Therefore, the safety of the bishop’s dominion was ensured.

The architecture of Olsztyn Castle results from looking for a simpler and cheaper way of constructing defensive strongholds. Hence, Prussian builders had to find a compromise between practicality and splendour. After all, the Castle had to accommodate a large number of troops and store provisions in case of war, not to mention housing permanent staff in peacetime.

The design of the Castle was based on the fresh Teutonic concept of a single wing with a regular floor plan and a corner tower. Consequently, such a design could expedite any subsequent expansion of the Castle.

Overall, the builders began erecting the Castle modelled on a regular walled stronghold on a quadrangular plan. Large and complex buildings, such as Olsztyn Castle, were constructed in harsh topographical conditions in order to facilitate their defences. Indeed, the Castle stood on a hill surrounded by wetlands and ravines.

The north wing with its west curtain wall and the east curtain wall with the “upper” gateway were built first. Next, the defensive tower in the south-west corner and the remaining curtain walls were constructed.

The north wing was completed before 1375. The first floor of this residential space features a two-room apartment in the west part. In the eastern section, there was a refectory and a chapel ornamented with vaulting. Access to the rooms was via individual entrances from the cloister.

Olsztyn Castle during the Polish-Teutonic War

Olsztyn Castle only had to be defended once – in August 1414 – during the Polish-Teutonic War. Nevertheless, it was unsuccessful. Troops belonging to King Władysław II Jagiełło of Poland plundered the Castle. 533 people lost their lives.

Around twenty people either resided (permanently) or worked at the Castle in Olsztyn.

The ledgers for 1582 include: two servants for the administrator, cellarer (in charge of provisions), a cook, a baker, the person in charge of the granary, an apparitor, an administrator in charge of working animals, a farm hand, a hunter, two gatekeepers, an assistant cook, a carter, a laundress and a shepherd.

Casual workers, such as stable boys, artisans and operators of the mill and forge, were also present at the Castle.

In command of the Castle was the burgrave*. Nevertheless, the most senior official in the Castle’s hierarchy was the steward. He was entrusted by the Chapter to attend to financial matters and take charge of the keys.

During peacetime, the Castle was guarded by two knights. Each morning, before the gates were opened, the guard awoke the Castle’s garrison by striking a gong twice. Bearing arms, everyone, apart from the administrator’s servants, gathered at the gate, which was opened by the steward. Afterwards, the area surrounding the Castle was searched and the gates were closed again.

* Burgrave – Since the medieval period in Europe (mainly Germany), burgrave was the official title for the ruler of a castle, especially a royal or episcopal castle

Apart from the fact there are no longer any trees present, the appearance and use of the courtyard haven’t changed since 1912.

The north wing houses the official ‘state’ rooms and living quarters. As for the south wing, this was used for domestic and administrative purposes.

On the grass, in the centre of the courtyard, it’s difficult to miss “Bartek”. This is an early medieval granite figure depicting a Prussian warrior.

Unfortunately, I wasn’t able to climb the tower on the day I visited. Nevertheless, I can still describe a few key features of the tower based on my research.

The tower is nine storeys high. Seven storeys are usually open to the public. Wooden stairs with handrails and landings lead to the top floor.

Above all, the tower was a watchtower consisting of two guardrooms.

Interestingly, the walls of the watchtower, the beams, fittings and even the wooden staircase, especially the oak steps within the thickness of the wall, are all authentic. 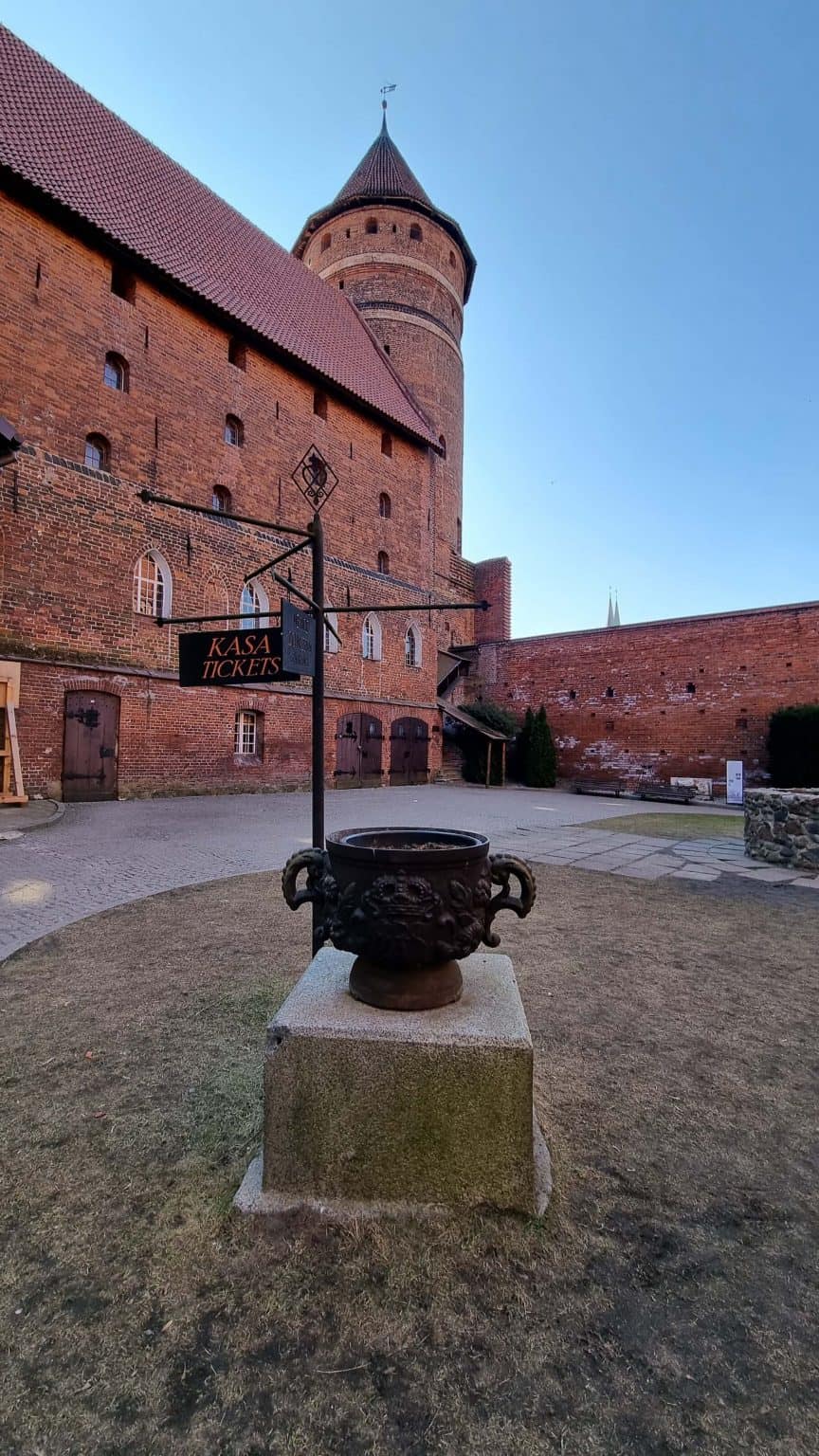 The cloister runs along the first floor of the north wing. It leads to the living quarters, refectory and first Chapel.

Certainly, the most distinctive feature of the cloister is the chart of the spring equinox drawn by astronomer Nicolaus Copernicus in 1517. Drawn on plaster work, this table is a record of an experiment carried out by Copernicus between 25 January and 20 April of that year.

Just below the chart is the entrance to the residential apartment once occupied by Copernicus. He was the administrator of the Castle in the years 1516-19 and 1520-21.

Back in the Middle Ages, meals were eaten communally in the refectory – the largest room in the Castle.

Located in the eastern part of the north wing, the chapel was merged with the refectory in the late 18th century. The aim was to create a single space which served as an Evangelical church. However, in the early 20th century, the area was divided into two with a solid wall.

The chapel’s current appearance stems from the neo-Gothic reconstruction work carried out between 1909 and 1912.

The Museum of Warmia and Mazury

In 1945, Olsztyn Castle became the seat of the Masurian Museum, later renamed as the Museum of Warmia and Mazury.

Visitors can see the first floor of the north wing, including rooms such as the Castle administrator’s living chamber, the chancery, the refectory and the old chapel. The top floor of the castle, which was oriented towards defence and storage, is also available for viewing. The corner watchtower, from which visitors can admire the views of the town, is open to the public.

The Museum is known for its somewhat unorthodox forms of sightseeing. Indeed, on certain days or nights, visitors can access rooms which are otherwise closed to the public. Moreover, there are opportunities to try on medieval armoury and costumes. Finally, children can take part in special workshops.

Where can you buy tickets to the Museum?

Tickets can be purchased in the shop and cafe on the left as you exit the passage in the gateway.

What else can you see as part of The Museum of Warmia and Mazury?

1. Archaeology – The museum has plenty of ancient objects in its storeroom, which are occasionally put on display in the temporary exhibitions. These excavated objects include clay ashtrays and bone blades.

3. An Exhibition of sculptures by Italian sculptor Adolfo Wildt