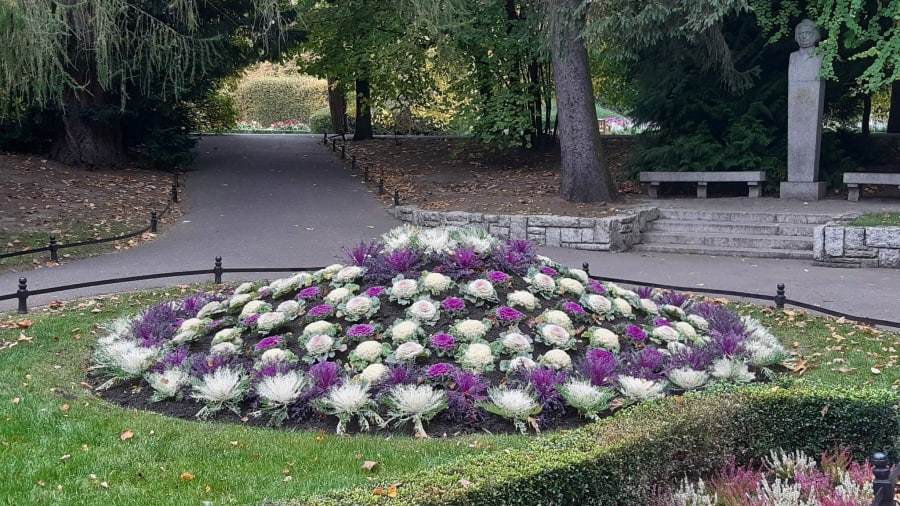 A warm, sunny Saturday in Gdańsk. Wanting to avoid the crowds on Gdańsk’s beaches (for obvious covid-related reasons), my wife and I headed to one of the best parks in Gdańsk, Oliwa Park.

A brief history of Oliwa Park – The early years

The origins of today’s Oliwa Park revolve around the monastery garden established by the Cistercians in the 12th century. The Cistercians are a Catholic religious order of monks and nuns. A fully decorative and recreational garden sprang up in connection with the construction of the Abbot’s Palace. This grand residence is mentioned in sources from the end of the 16th century.

One of the names most strongly associated with Oliwa Park is the Cistercian, and last Abbot of the monastery of Oliwa, Jacek Rybiński. In the middle of the 18th century, Rybiński contracted the architect and gardener, Kazimierz Dębiński, to oversee the park’s operations. Subsequently, Dębiński implemented the design of the gardener Hentschl, who drew his inspiration from the French landscape architect André Le Nôtre. Le Nôtre created the ornamental gardens in Versailles. Hence, Ogród Francuski – the garden in a Baroque French style – appeared in front of the Abbey Palace residence. It has survived until today, in a slightly changed form.

Abbot Rybiński died in 1782. Thereafter, the Prussian King appointed Karol Hohenzollern-Hechingen as the new Abbot. Hohenzollern-Hechingen brought Jan Jerzy Saltzmann, creator of the Royal Gardens in Potsdam, to Oliwa. Inspired by fashionable Chinese garden art of the time, Saltzmann set out to imitate wild nature and give the garden a new character. Hence, Saltzmann created the winding paths and water reservoirs in what is now known as the English-Chinese garden.

A brief history of Oliwa Park – The nineteenth century onwards

In 1831, the Cistercian order was dissolved. Five years later, Hohenzollern-Hechingen died, meaning Oliwa Park was transferred into the hands of the Prussian state. Gustaw Schöndorf became the inspector of the park until 1881. Schöndorf transformed the park into a dendrological-landscape garden, importing many exotic varieties of trees and shrubs.

Erich Wocke, manager of the park between 1899 to 1929, made further changes to the park’s landscape. For instance, in around 1910, he established an alpine garden.

The popularity of Oliwa Park increased when, in 1925, Oliwa became the seat of the bishop of Gdańsk, and the post-Cistercian church was raised to the rank of a cathedral. In 1927, a museum was opened in the Abbot’s Palace.

Notable developments after the Second World War include the establishment of the botanical garden in the years 1952-1956. In 1955, on the centenary of his death, the park was named after Polish poet and political activist Adam Mickiewicz.

Soon after pulling into Oliwa Tram Terminal, we quickly located the Park’s south-east entrance. This is on the corner of Opata Jacka Rybińskiego Street and Aleja Grunwaldzka.

Our walking tour of the park started at “Bukowa Aleja” – literally “beech alley”. The trees have been delicately crafted into the shape of a tunnel: 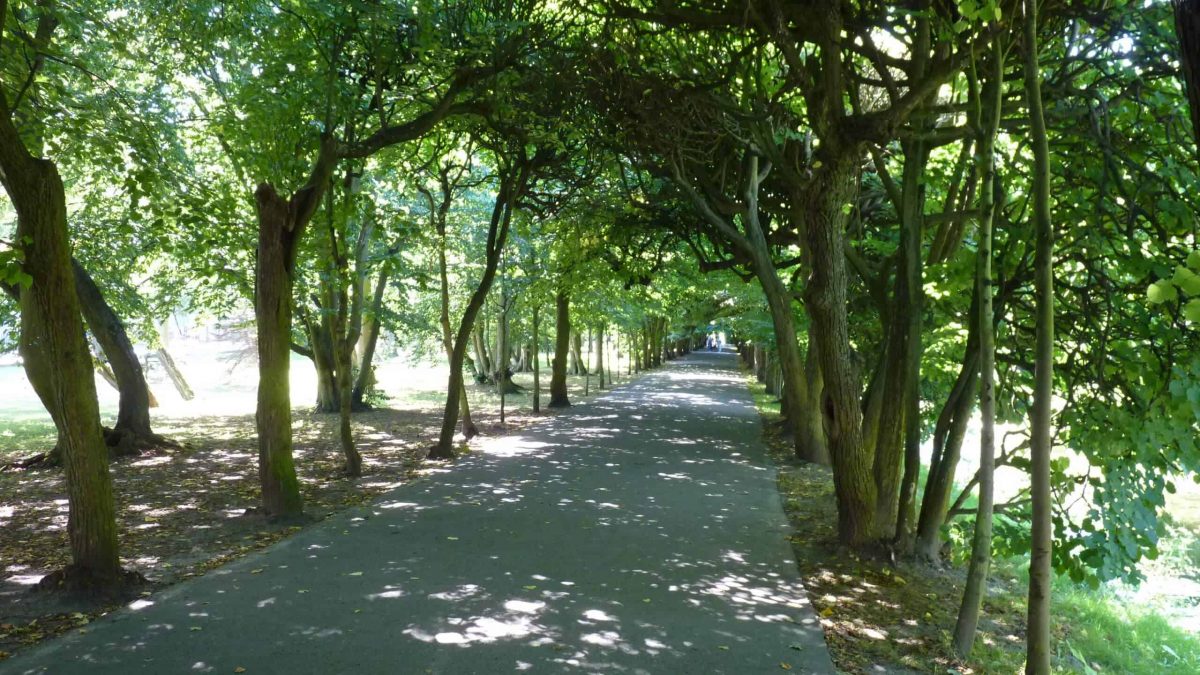 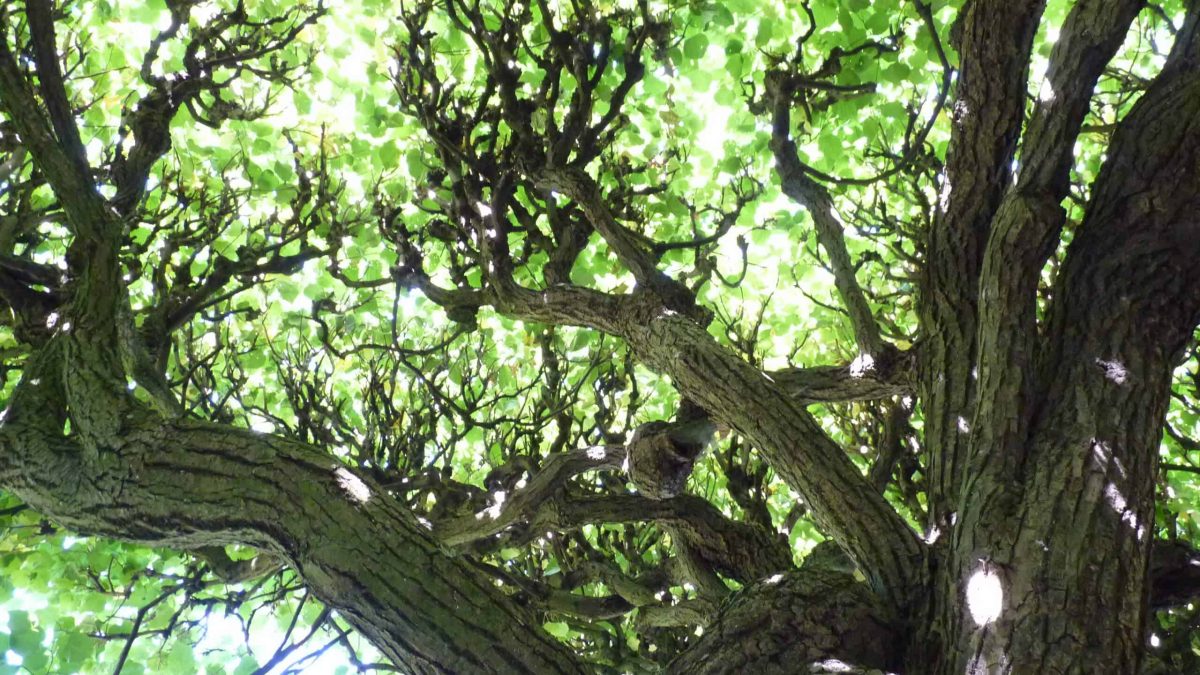 Meanwhile, in the long, thin pond tucked behind Bukowa Aleja, we stumbled across some wondrously wild scenes: 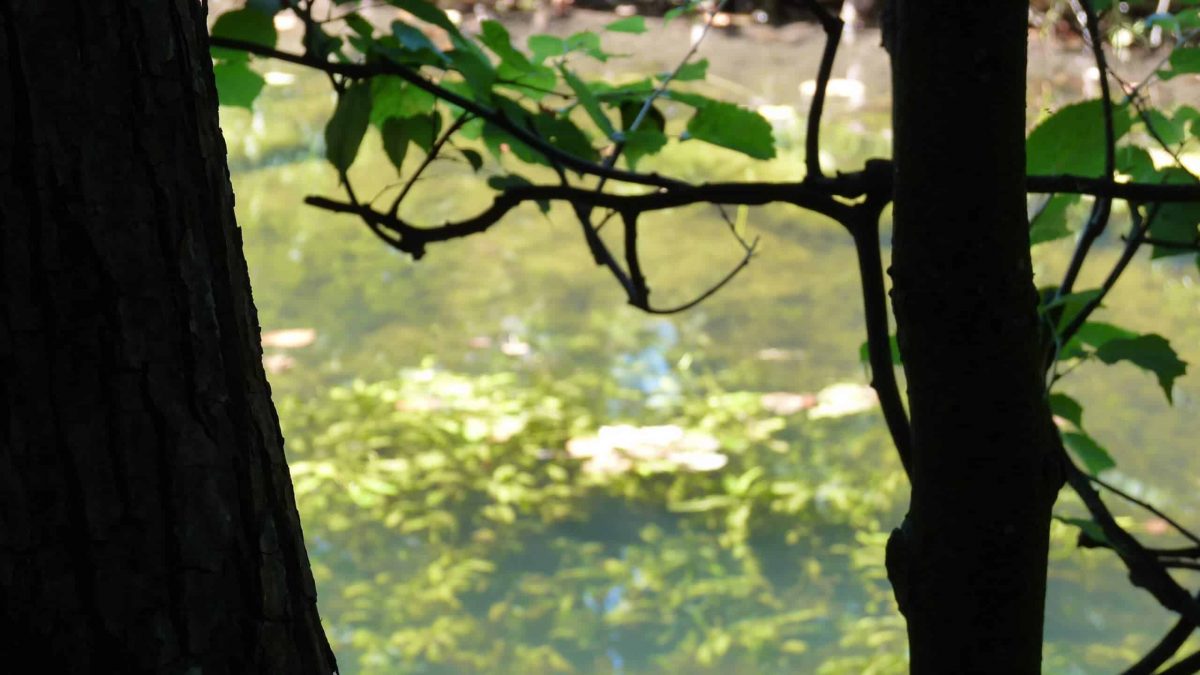 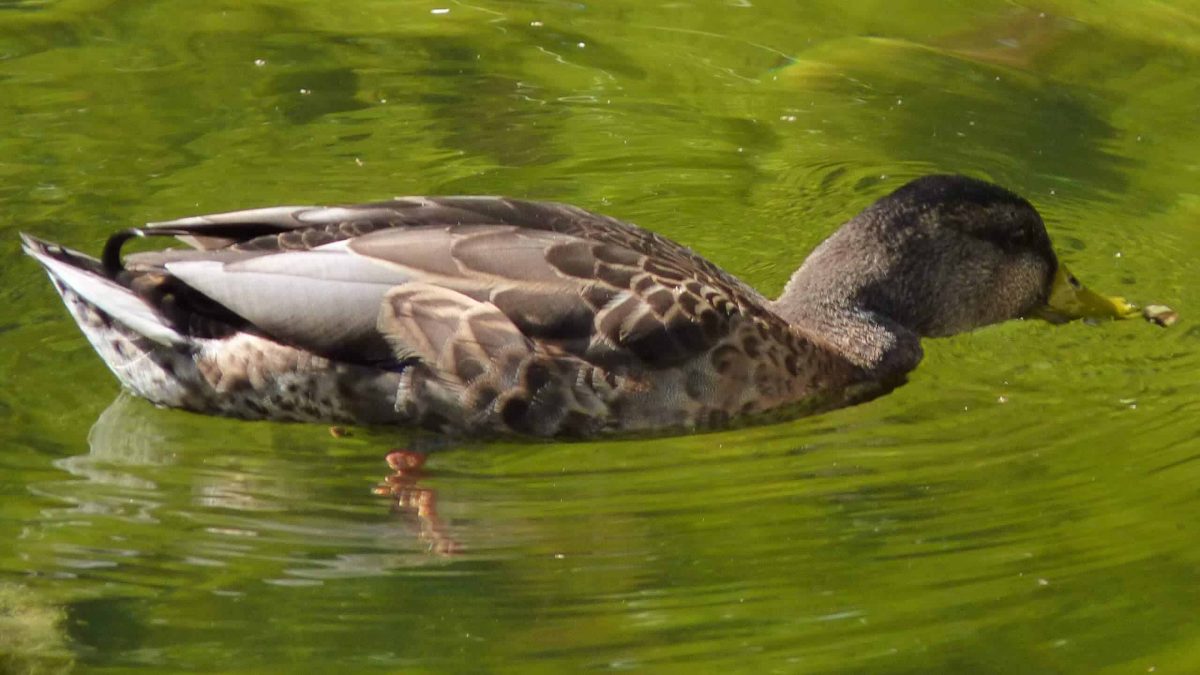 From Bukowa Aleja, we walked in a westerly direction to a pond just below the French garden area in front of the palace. A generous scattering of benches, lovely flowers, carefree ducks and a magnificent view of the Abbot’s residence await visitors: 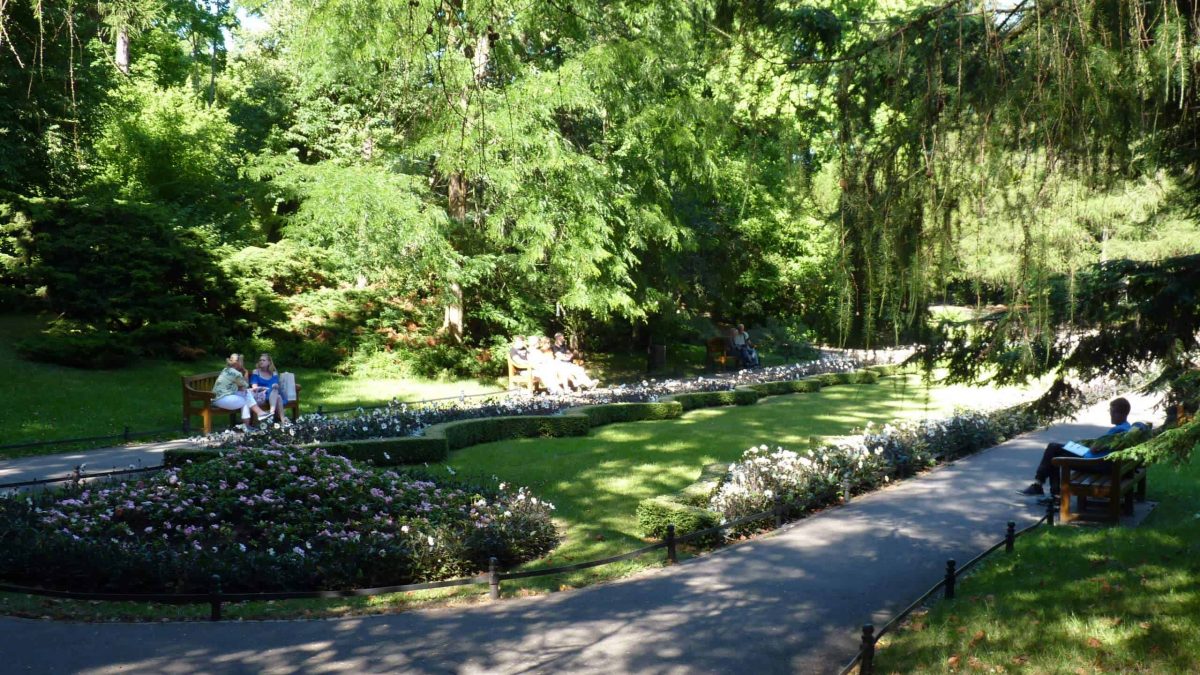 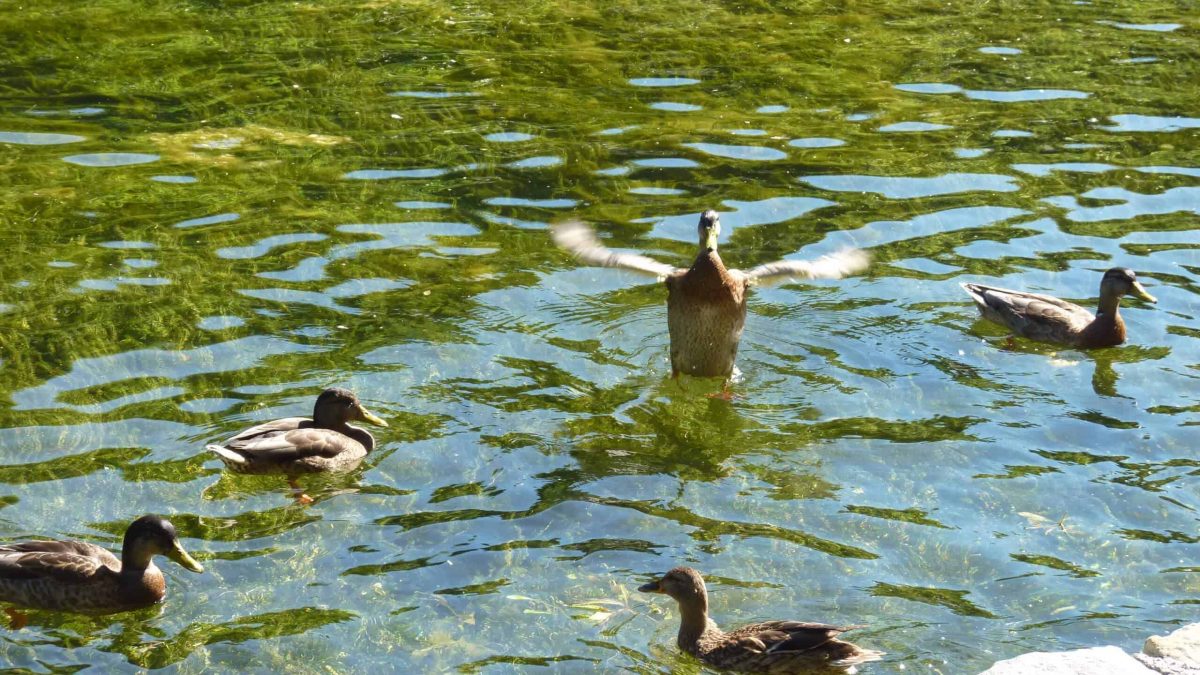 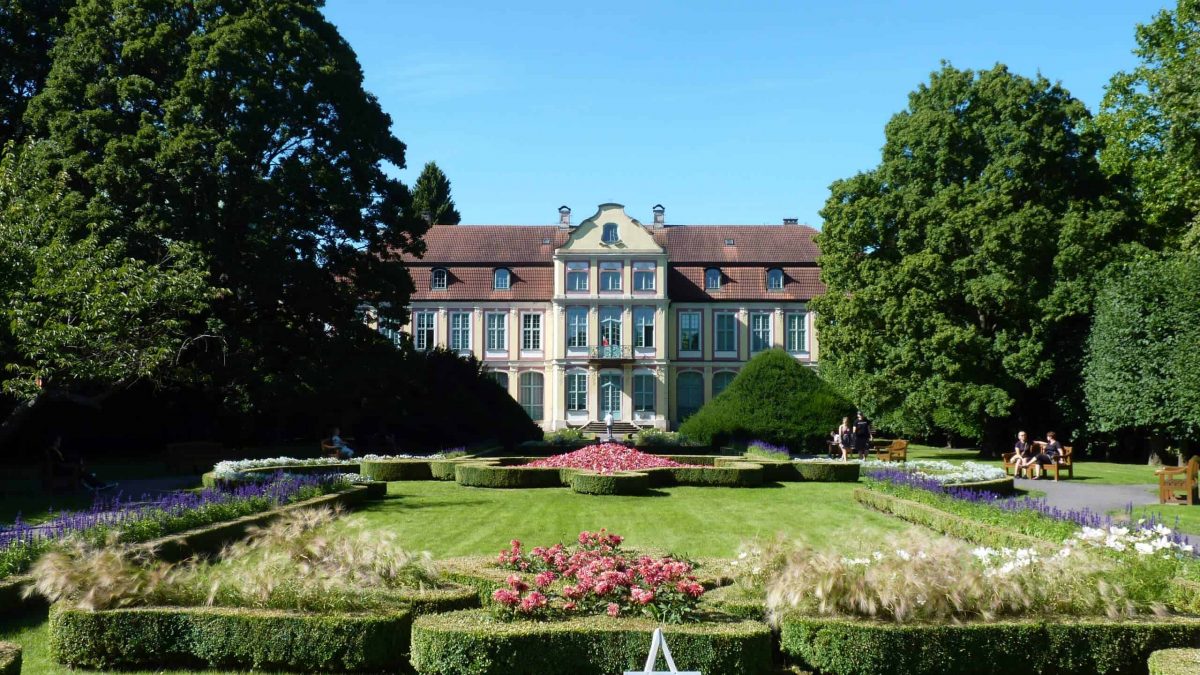 The bizarre whisper caves and a most impressive waterfall

Onwards we marched towards Groty Szeptów – the whisper caves.

The whisper caves owe their name to the specific acoustic properties they exhibit. The two hemispheres, which face each other, are positioned in such a way as to amplify sound. Hence, I entered one cave and my wife entered the other. Whilst standing at the back of the caves, we turned our backs to each other and whispered away for a little while. Overall, the science was never in doubt – we clearly heard each other’s whispers

Done with whispering utter nonsense to my wife, we scarpered from the whisper caves in the direction of a cracking little waterfall. 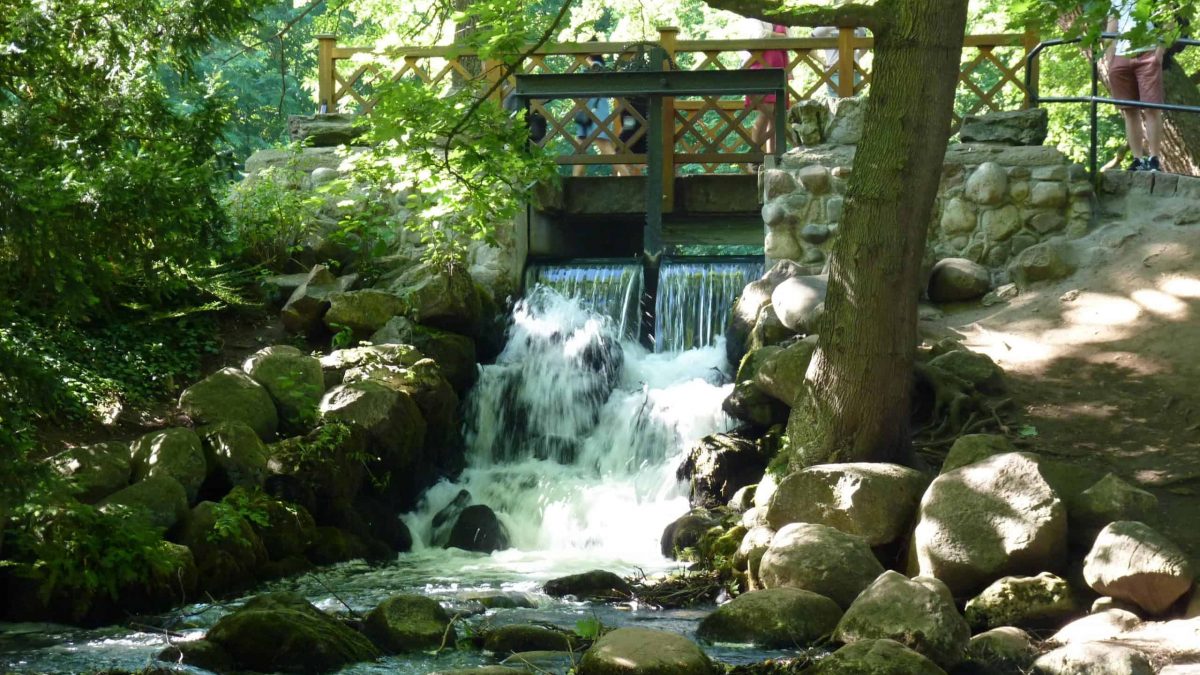 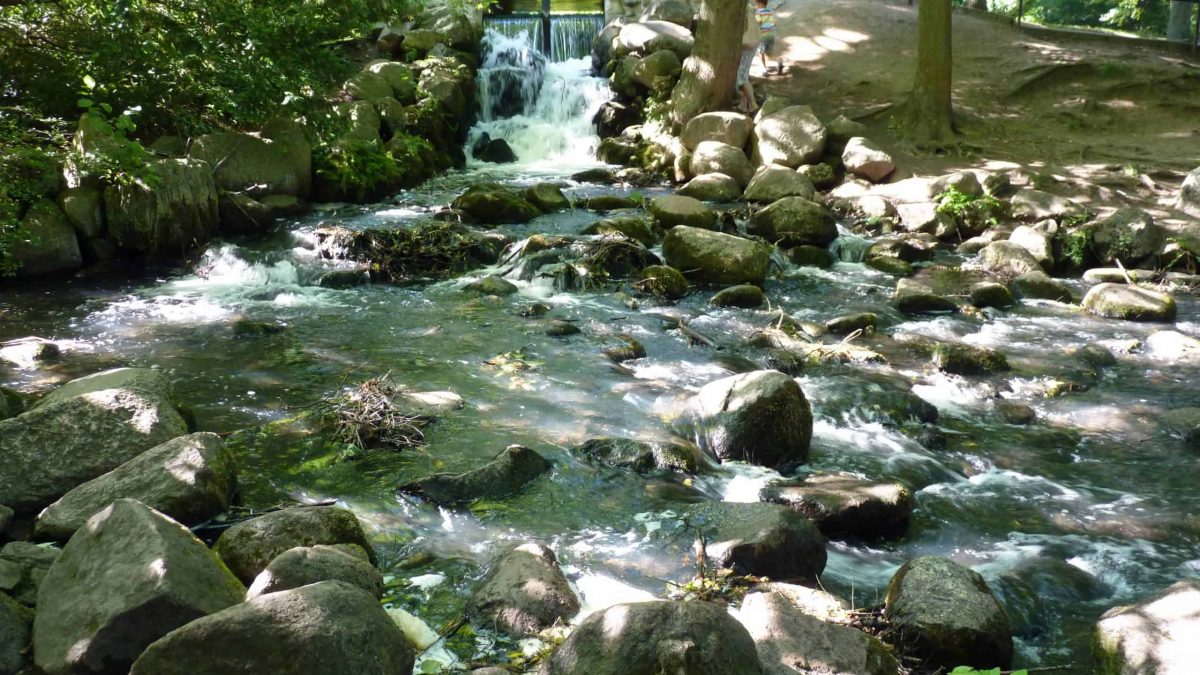 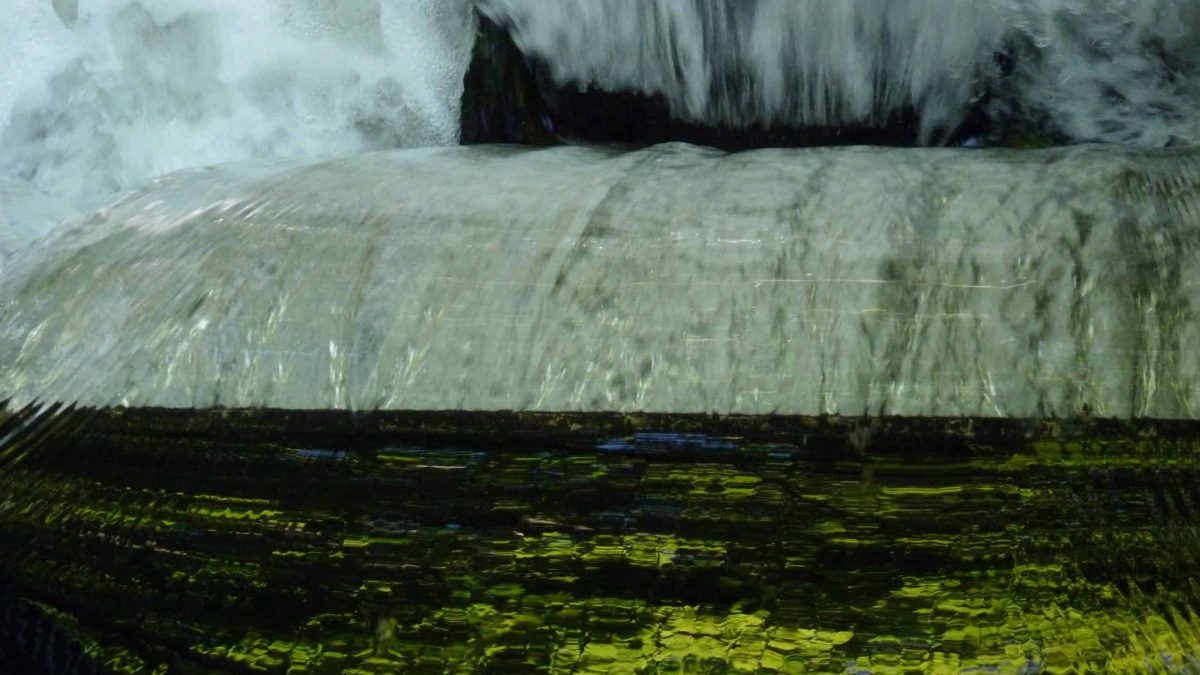 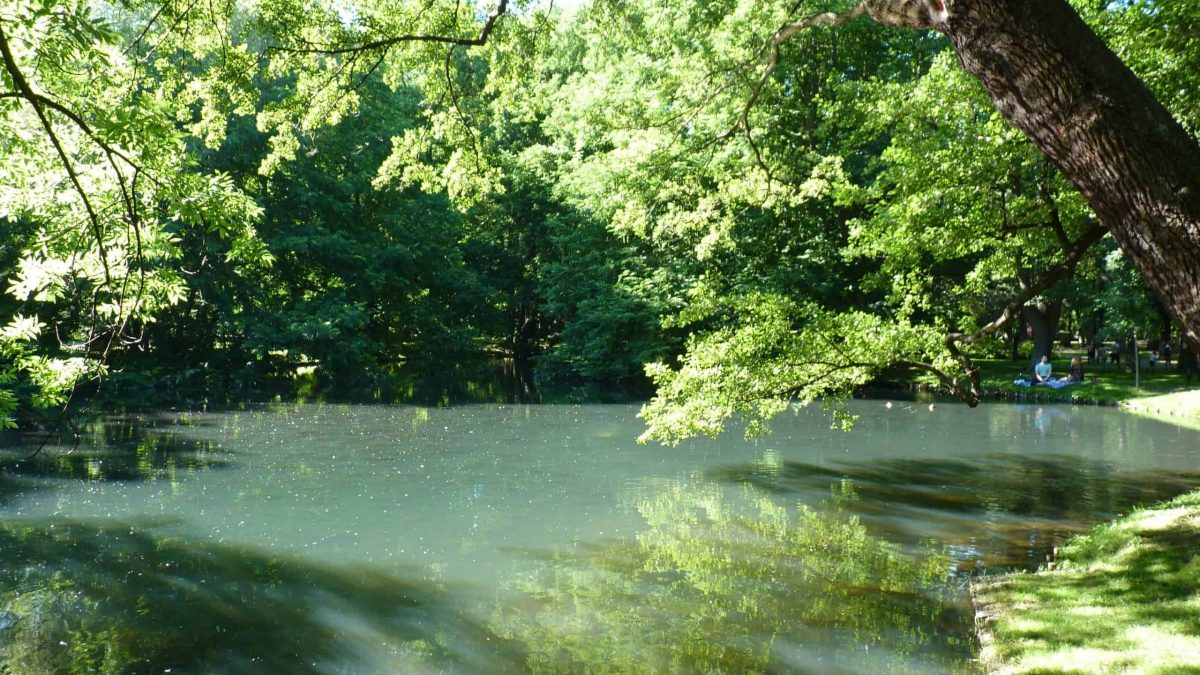 No walk around Oliwa Park is complete without a visit to the Japanese-style botanic garden: 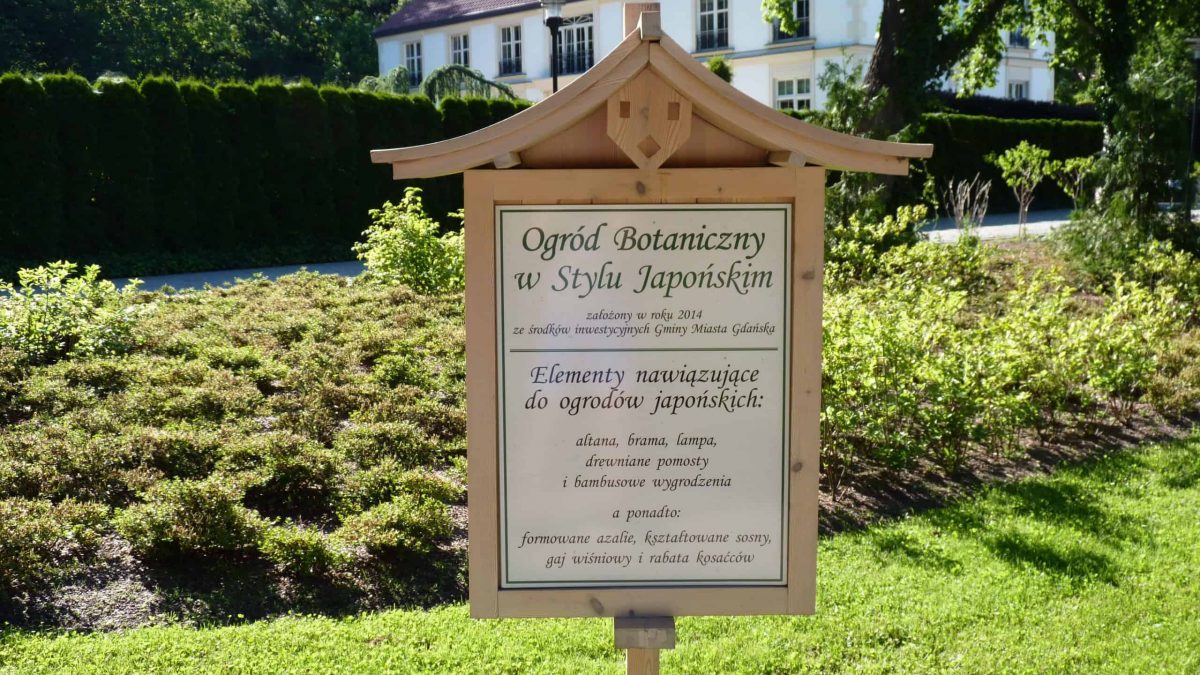 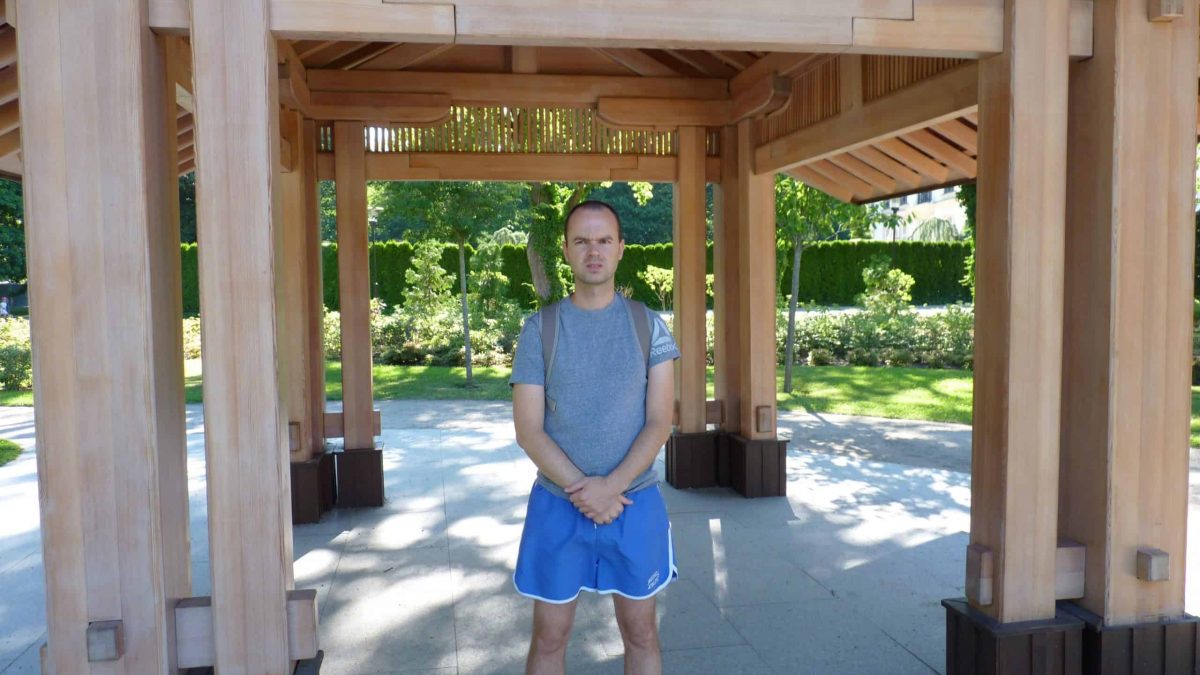 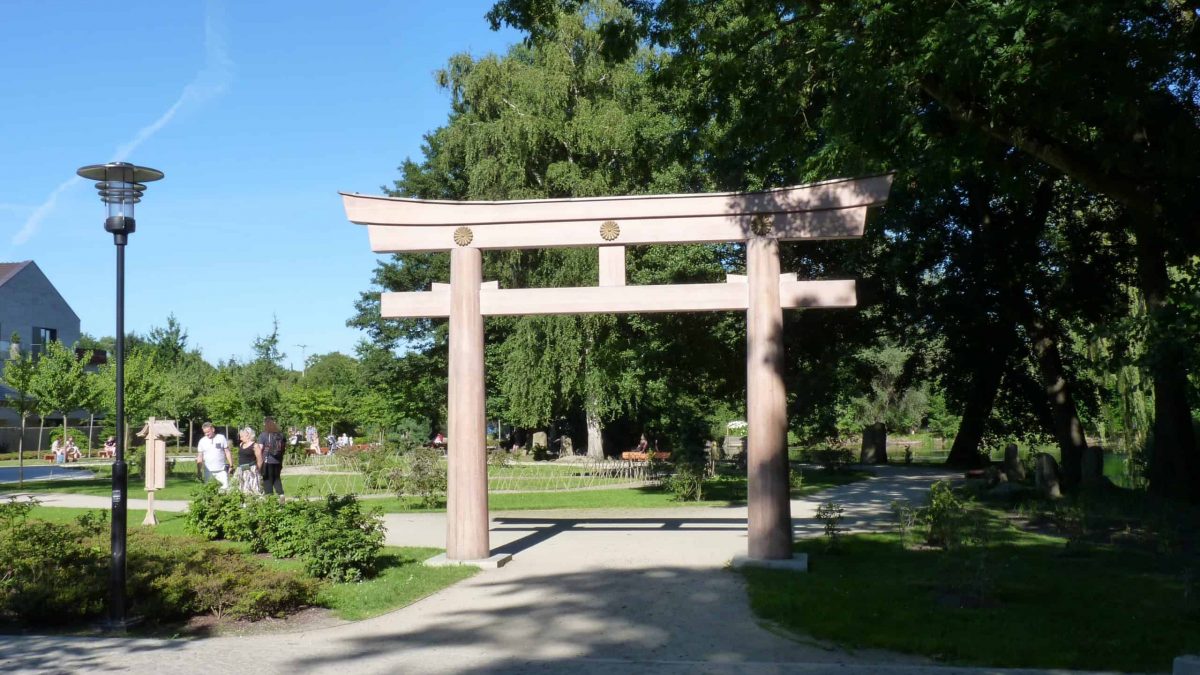 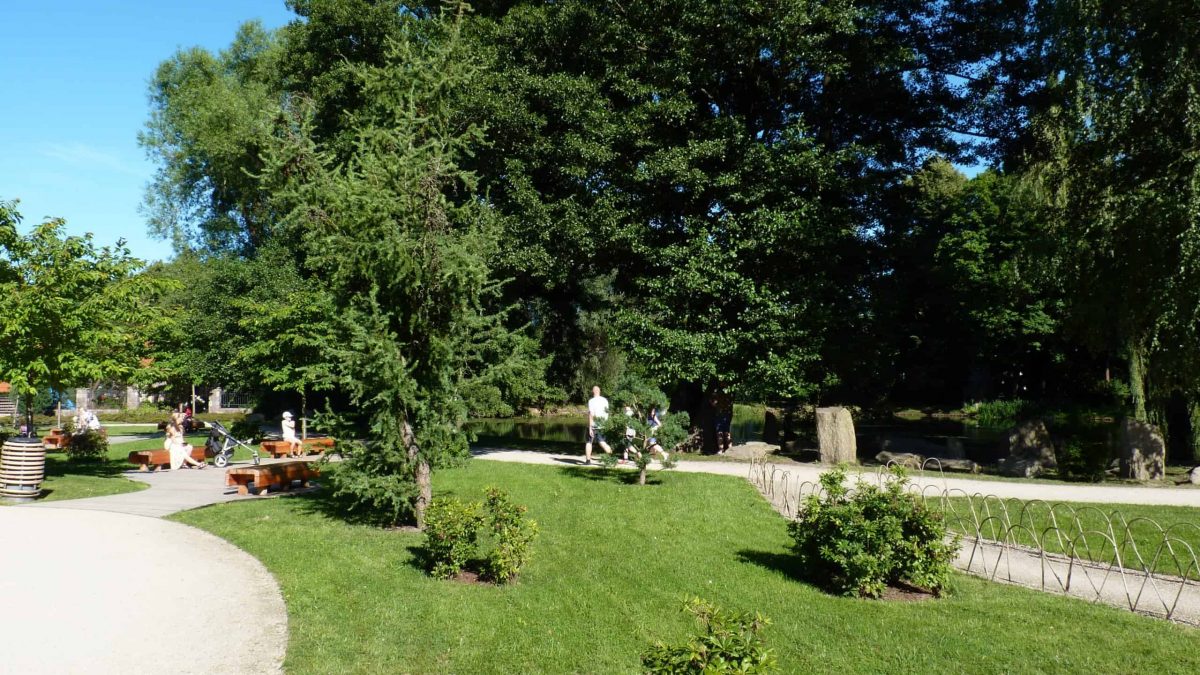 Oliwa Park – Simply one of the best parks in Gdańsk

From the whisper caves to “beech alley”, and the English-Chinese touches to the Japanese-style botanic garden, Oliwa Park is a breathtaking urban oasis. It is easily one of the best parks in Gdańsk.

Looking ahead to wintertime, Oliwa Park turns into a magical kingdom as it becomes illuminated with thousands of Christmas nights.

Check out two of our videos below which show Oliwa Park in all its daytime and winter night glories: