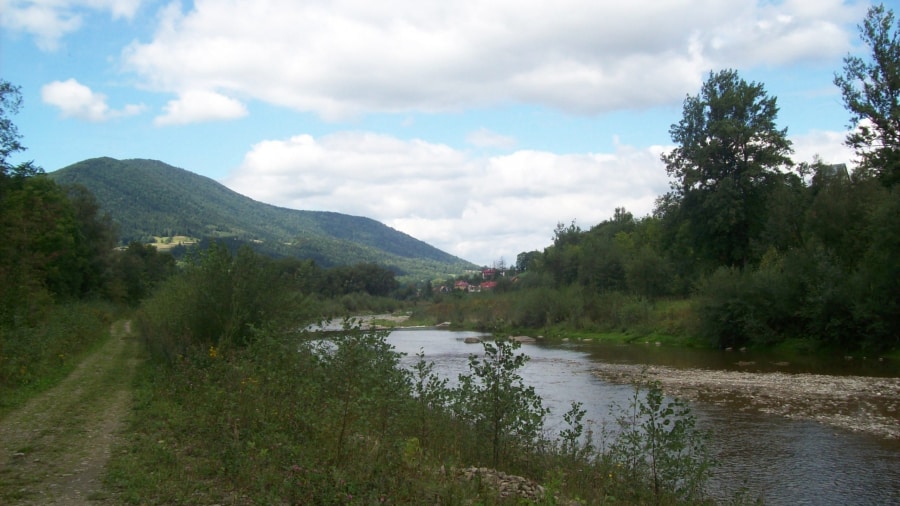 It’s the end of June, 2005. I’m sitting on a bench outside an ice cream shop in Mszana Dolna. To my right, some kids are playing badminton. On the other side of the street, a nun is walking briskly – to the church no doubt.

After a thirty hour journey from Nottingham to Kraków, my friend Paweł and I wasted no time in hopping on a bus at the main bus station in the former Polish capital. The destination was Mszana Dolna, which is around 55km south of Kraków.

A little bit about Mszana Dolna

Mszana Dolna is a town located in Limanowa County, Lesser Poland Voivodeship. Mszana is situated in a picturesque mountain valley.

A few memories of Mszana Dolna

Without a diary to refer back to, it’s tough to conjure up a lengthy account of my time in Mszana Dolna. Nevertheless, a few deep impressions and memories have remained with me until today.

First of all, I felt as if I was in a deep state of relaxation – almost trance-like – the entire time I was in Mszana. From the very first moment I got out of the bus at the main bus station, the lush green hills which belong to the Western Beskids mountain range captivated me.

We arrived at Paweł’s house. His mother and sister were living there, while Paweł tended to stay at his flat in Kraków. Paweł’s father died in a car crash some years before.

I expected Paweł’s house to be nothing more than a modest cottage. It was more like a mansion. Nevertheless, it was a mansion for very humble people who’d had a most traumatic experience losing a husband and father.

There to greet me was Paweł’s mum, Ewa, sister, Beata, and a few guests, Barbara and her daughter, whose faces I remember well.

Upon entering the house, Paweł asked me to take my shoes off. This had never really been a custom in England, so I was a little taken aback. Paweł then gave me a pair of slippers. Apparently, Poles don’t feel at ease if their guests might feel cold, or catch a cold.

I could tell immediately that Paweł’s mum was an extremely warm-hearted and hospitable lady. She tried hard to speak with me, regardless of her basic level of English. With Paweł doing the translating, Ewa and her guests asked me many questions about my life and hobbies. Of course, I had many questions for them about their lives and Polish culture and traditions too.

I lived in Bosnia and Serbia for five years. Their approach to hospitality is more along the lines of pummelling guests with food and drink. Of course, I never went hungry in Mszana Dolna. However, the Polish hospitality I encountered there tended to revolve around making me feel very welcome and at ease. I was quite nervous in the run up to the journey to Poland. Those nerves soon dissipated in the company of Paweł’s family and guests.

At 19km long, the River Mszanka is a tributary of the River Raba. The Mszanka flows out at an altitude of about 727 m on the western slope of the Przysłop Pass in the town of Lubomierz.

Measurements carried out over the years have found that the water in the Mszanka is Class 1 clean. Indeed, it was some of the purest river water I’d ever seen.

While writing this section about the River Mszanka, I’ve also been switching to Google Street view and taking Pegman for a walk by the river in north-west Mszana Dolna. It looks like a hot August day in 2013. With those lush green hills all around, the low and slow-flowing water, mini waterfalls, river rocks and pebbles, almost wistful memories come flooding back.

One evening, Pawel’s sister, Beata, Paweł and I went down to the river. Beata was in her own world, moving from rock to rock nestled in the shallow river, and desperately trying to maintain her balance. Meanwhile, I was overcome by the surroundings and didn’t want to go back to the house.

The ‘honeymoon phase’ of culture shock

I hardly knew Paweł, so his invitation to Poland came out of the blue. Amidst all of the spontaneity and culture shock, I had so much to look forward to and absolutely nothing to lose. In Mszana, every single walk, the slow pace of life, the language, and everything else that was visually and culturally incompatible with what I’d been used to in England, intrigued me.

By writing this post, I’ve taken a nostalgic trip down memory lane.

The fact remains that I yearn to return to the Mszana Dolna area. There are so many hiking trails and peaks around Mszana which offer sweeping views across the western Beskids.

Nostalgia and some long overdue exploration – all rolled into one.

Mszana Dolna – I’ll be back.