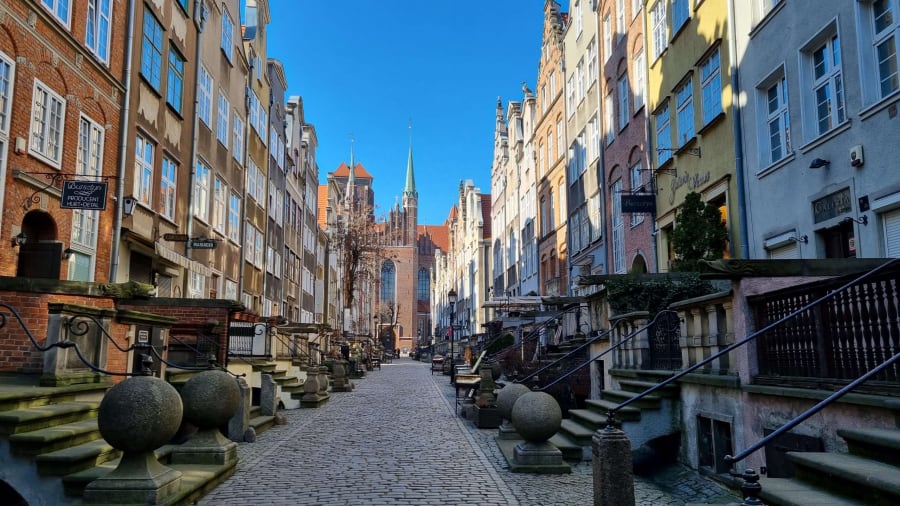 It’s dawned on me that Mariacka Street (Ulica Mariacka) is the most beautiful street in Gdańsk.

Mariacka is a picturesque cobbled street that’s lined with amber galleries and enticing cafés. It runs from St. Mary’s Basilica to the Motława river. Given that the street boasts two rows of terraced tenement houses, it lends the scene a tremendous amount of charm.

Standing by Mariacka Gate and gazing down Mariacka Street with the imposing St. Mary’s Church up ahead. It has to be one of the most breathtaking sights in Poland.

The first mention of Mariacka Street comes from the mid-fourteenth century.

In the Middle Ages, Mariacka was a street of shoemakers and butchers. However, the eastern part of the street was devoid of buildings due to wetlands adjacent to the unregulated Motława river.

Originally, modest brick or half-timbered buildings were erected along the street. From the end of the 15th century, gothic tenement houses sprang up on Mariacka. These were later displaced by buildings in the style of Renaissance and then early Baroque architecture.

With time, Mariacka Street came to be known as Frauengasse (Maiden Street).

Wartime devastation and the resurrection of Mariacka Street

Bombing raids in March 1945 destroyed almost all of the buildings on Mariacka. Remarkably, a single tenement house (number 1) was not destroyed.

Several porches, parts of St Mary’s Gate and elements of the Naturalists’ House (Dom Przyrodników) – the headquarters of the Archaeological Museum in Gdańsk – also escaped the destruction. 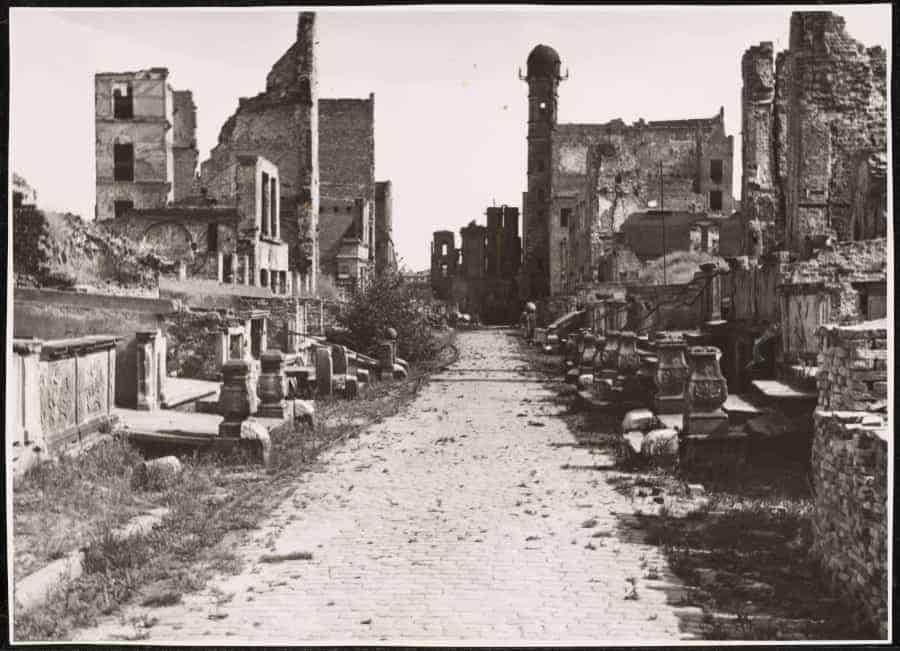 Looking at the image above, it’s plain to see how the reconstruction of Mariacka was an extraordinary achievement of artistic and architectural conservation.

In the years 1952-53, workers removed rubble from the damaged street. The reconstruction of the tenement houses began in the mid-1950s. Clearly, the restoration of the entrance porches and all other intricate decorations on Mariacka required a great deal of time, patience and the highest level of conservation skills.

The most beautiful street in Gdańsk: Buildings and notable features

The eye-catching gothic tenement house at 1 Mariacka Street is the nearest to St. Mary’s Basilica. It’s considered to be the oldest residential building in Gdańsk, dating back to 1451.

In front of the tenement house there are late gothic porch plates with a depiction of the scene of the Annunciation of the Blessed Virgin Mary.

In the sixteenth century, records suggest that the house was inhabited by Anna Schilling. Anna was the housekeeper and alleged lover of Nicolaus Copernicus in Frombork.

During renovation works of the house on Mariacka, workers found fragments of a poorly preserved chest in the basement. The date AD 1539, the inscription “Anna”, and a blurred fragment of Anna’s surname – “Schilli ..” – were inscribed on the chest.

These days, the house functions as the Gotyk House Hotel. There’s also a souvenir shop at the bottom of the steps. 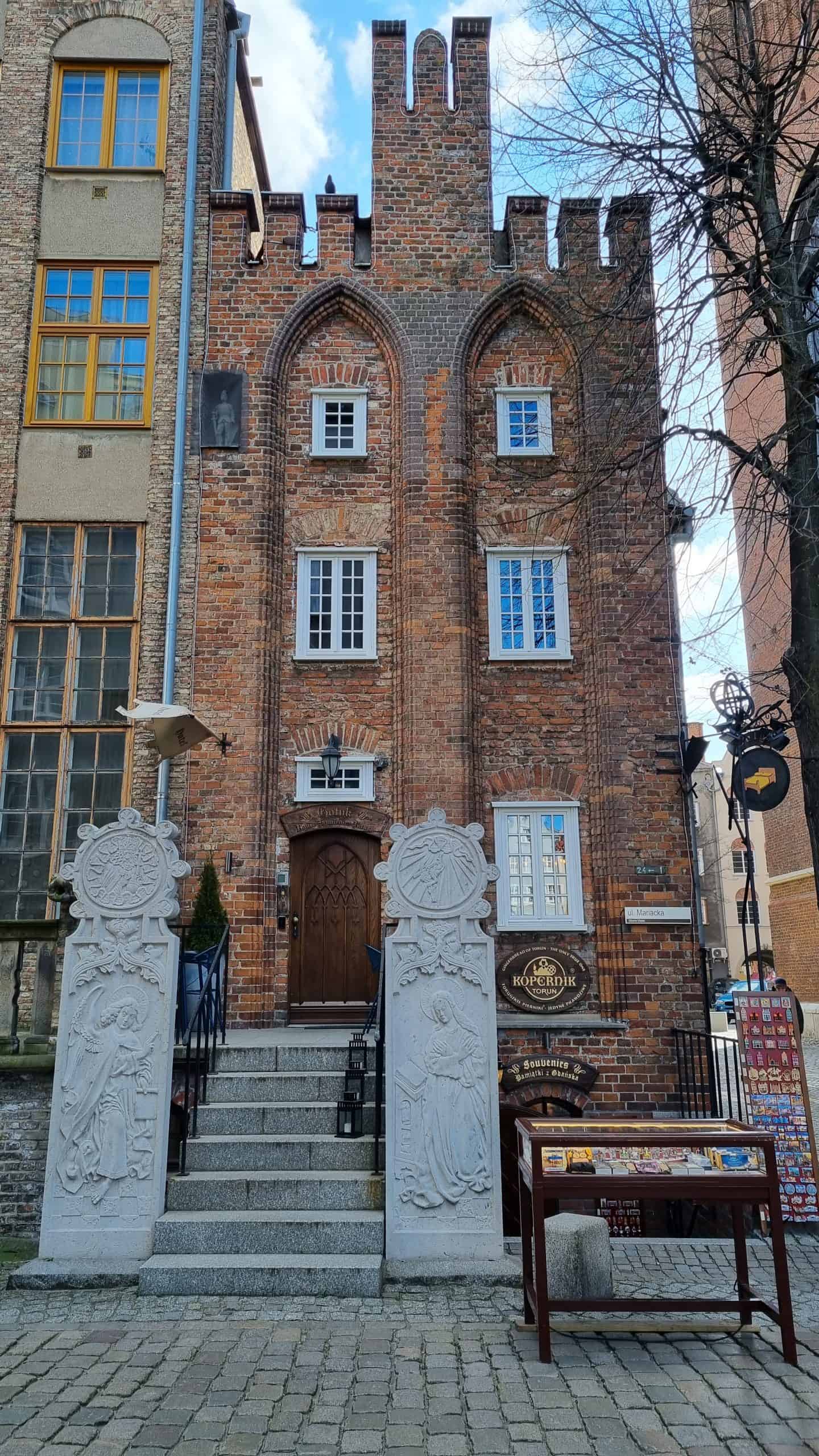 At 25/26 Mariacka Street, right by the Motława, one can’t fail to notice the picturesque House of Naturalists (Dom Przyrodników). This building is the seat of the Archaeological Museum in Gdańsk.

The tenement house was probably built according to the design of Flemish architect, Anton van Obberghen, in the years 1597-1599 at the request of the merchant Hans Köpe. Originally, the building served as both a residential house and a storage warehouse.

The Naturalists’ House owes its name to the fact that, from 1846, it was the seat of the Gdańsk Natural Society (established in 1743). The founder of the Society was outstanding physicist, Daniel Gralath – later the mayor of Gdańsk. Inside, the Natural Society arranged meeting rooms, research laboratories, a small museum and a library with approximately 20,000 volumes. The interiors were decorated with portraits of scientists, including Gralath, Nicholas Copernicus, Mathias Nathanael Wolff, and a bust of Jan Heweliusz, received as a gift from the Polish king Stanisław August Poniatowski. Poniatowski was King of Poland and Grand Duke of Lithuania from 1764 to 1795.

The 30-metre-high facade is a characteristic feature of the Naturalists’ house. Its most striking feature, however, is a slender 36-metre tower with a staircase, tucked into the corner between the north elevation and St. Mary’s Gate. The turret is crowned with a beautiful, mannerist helmet.

Only the front wall and the tower survived the Second World War. The house was rebuilt in the years 1956-1961, according to the design of Polish architect Kazimierz Macur, in a form similar to the original. The aim of the reconstruction was to suit the needs of the newly established Archaeological Museum.

The gargoyles of Mariacka

Perhaps the most notable relics on this street are the ornate gargoyle rain gutters, known locally as Rzygacze (literally “spewers” in English).

Back in the day, these menacingly raised stone heads, which took the form of heads of animals or fantastical creatures, spat out rainwater. Hence, with the gutters well and truly flushed, the water ran down into the nearby Motława River.

One of the gargoyles, between 6 and 7 Mariacka, even got its own name – Pomuchel – which means baltic cod in the Kashubian language.

You’ll see countless stalls selling amber – a semi-precious gemstone – all over Tri-city. However, the most prestigious amber dealers are located on Mariacka Street.

Galeria Wydra (Mariacka 48/49) has one of the most beautiful amber display windows in Gdańsk.

On Mariacka Street, there are many beautifully decorated front porches containing biblical and mythological scenes. Those visible on this street were reconstructed after the war.

These porches are a characteristic element of the architecture of Gdańsk. At the beginning they were wooden, and later (in the 16th century) they took the form of brick porches with decorative blacksmith and sculptural finishes. On warm days, the inhabitants of tenement houses dined or simply gossiped there.

In the 19th century, porches hindered the increase in the volume of traffic. Hence, many of them were removed. Nevertheless, it’s worth checking out preserved porches on streets such as Piwna and Świętego Ducha.

Other buildings of historical note on Mariacka

Here are some other historically noteworthy buildings on the most beautiful street in Gdańsk:

The most beautiful street in Gdańsk

I’ve walked down Mariacka at its bustling best during St Dominic’s Fair in the summer months. For one reason or another, I’ve also been the sole pedestrian on the street at around ten thirty p.m on a winter’s night.

There’s an endless number of adjectives I could retrieve from my vocabulary to describe Mariacka Street – the most beautiful street in Gdańsk.