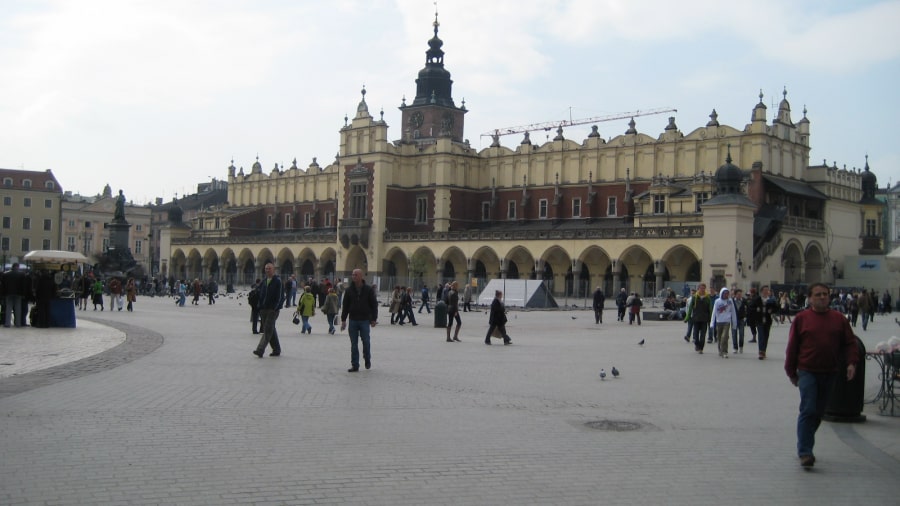 This post is not intended to be a complete guide to living in Kraków as an expat.

These are merely reflections on the time I spent in Kraków between 2006 and 2007.

In my previous post, I wrote about my first time in Poland in 2005 and the culture shock I experienced. I stayed in my friend Paweł’s flat on Juliusza Słowackiego Avenue for a few weeks that summer. I did a lot of walking, and certainly acquired the lay of the land concerning the Piasek Północ and Kleparz districts near the flat. These districts lie just north of Kraków Old Town.

Preparing to do CELTA in Kraków

My first trip to Poland came to an end. I returned to England for my final year at university in Nottingham.

I quickly made up my mind that I would abandon the idea of teaching in the UK. Instead, the thought of teaching English in Poland occupied my mind – even from my first few days back at home in England.

So, I began to browse the net to see how to get my foot in the door to teach English in Poland.

In quick time, I applied to do the CELTA Course at International House (IH), Kraków (this branch is no longer in operation). The CELTA is the world’s most recognised entry-level English language teaching qualification.

To enrol on the CELTA, I had to get through a brief and informal “interview” with one of the course leaders. I remember the interview rather well. This course leader asked me some questions about English grammar which I had no idea how to answer. It was quite a wake up call for me. Honestly, I can see why they try to expose would-be teachers for gaps in their grammatical knowledge. This tactic surely coaxes plenty of course participants to read up on English grammar before the CELTA begins.

Despite the fact that I muddled through the interview, IH offered me a place on the six-week course. I started in the middle of July, 2006.

I got through the final year of my history degree, even gaining a distinction for my dissertation.

After leaving Nottingham, I returned home to my parents’ place to prepare for Poland.

Summertime in Kraków was just around the corner.

IH arranged accommodation for the CELTA course trainees. Interestingly, they put me up in a flat on Krowoderska Street – just a few metres away from Słowackiego Avenue.

At the beginning of my stay, I got caught up with the intensity of the course. Some time later, however, it struck me one night that I could see Pawel’s flat from my bedroom window.

Frankly speaking, I began to connect the dots. Out of the hundreds of streets in and around the centre of Kraków, the school had to choose Krowoderska. It wasn’t just Krowoderska. It was the precise location on Krowoderska, and the right side of the street, from where I could see Paweł’s flat.

Unlike Paweł, I’m not a particularly spiritual guy. Yet, texting then greeting each other from our bedroom windows one evening across a busy main road was a jot moving, if not plain odd. It almost felt like I was part of a movie.

I had been exposed to the first prolonged period of unbearable heat in my life the previous summer in Kraków. Hence, I should have been ready for anything another summer there had to throw at me.

It turned out that July 2006 was the warmest in Poland since meteorological measurements began (i.e. 1779).

Every single day and every single night throughout those six weeks was uncomfortably hot and humid. Fortunately, perhaps, I was exhausted every day from all the study and teaching practice. Otherwise, I’m not sure how I would have fallen asleep every night.

I found out the previous summer just how alluring Kraków Old Town and the Market Square could be for first-timers in Kraków.

After school, I often returned to the flat via the Market Square. Sometimes, I went for a beer in a beer garden on the square with a few of my coursemates.

Dating back to the 13th century, the Market Square is the largest medieval town square in Europe. Just approaching it gets the adrenaline flowing.

Entering the Market Square from any of the side streets, and gazing at the splendour of the cloth hall, churches and elegant townhouses, it occurred to me every time that there simply can’t be a finer sight in the world.

Being the central feature of the Market Square, the Cloth Hall (Sukiennice in Polish) steals the show. Once a major centre of international trade with origins dating back to the 13th century, the Cloth Hall continues to bustle with the energy of countless vendors and traders.

Onwards and upwards – TEFL in Poland

It was an intensely hot and intensive six weeks in Poland’s former capital.

I passed the CELTA and secured a job at a school in the town of Dębica. Dębica lies around 120 km east of Kraków.

I went back to England for a few weeks before moving to Poland.

During the year I worked in Dębica, I visited Kraków almost every weekend.

In September, 2007, I got a job teaching English at a school in Kraków.

In all truth, my mind was on other things. For one, playing music.

Back to the summer of 2006. One of my other coursemates on the CELTA was allocated a flat right next door to me on Krowoderska. Her husband and child accompanied her from the USA.

It turned out that my coursemate’s husband was a mean guitarist. I could play a bit myself so we compared notes. Anyhow, we mutually agreed to go busking in Kraków Old Town. I vividly remember singing backing vocals to “Wish you were here” on a side street off Sławkowska Street.

That brief experience resonated with me due to the adrenaline and pure joy busking brings.

By October 2007, I had around fifteen songs which I could perform live. I soon my ideal busking spot. It was a little archway with shops on Grodzka Street. Importantly, it boasted a decent echo and a steady stream of passers-by.

Andy, a colleague from work, usually joined me. He’d sit on some steps opposite to where I was playing. Frankly, I probably wouldn’t have been able to do what I did without his presence and moral support.

I never truly believed that I was a great singer, and I certainly didn’t go busking for the money. However, two events confirmed that I had some talent. First of all, I earned 130 PLN in just 90 minutes one evening. Secondly, a local artist selling his pictures on the street came up to me and said something along the lines of: “you’ve stamped your heart and soul on this street”.

Back then, the busking scene in Kraków was thriving. I remember the two characters below: a guitarist on the Main Square, and a guy who could do some mind-boggling things with a small football: 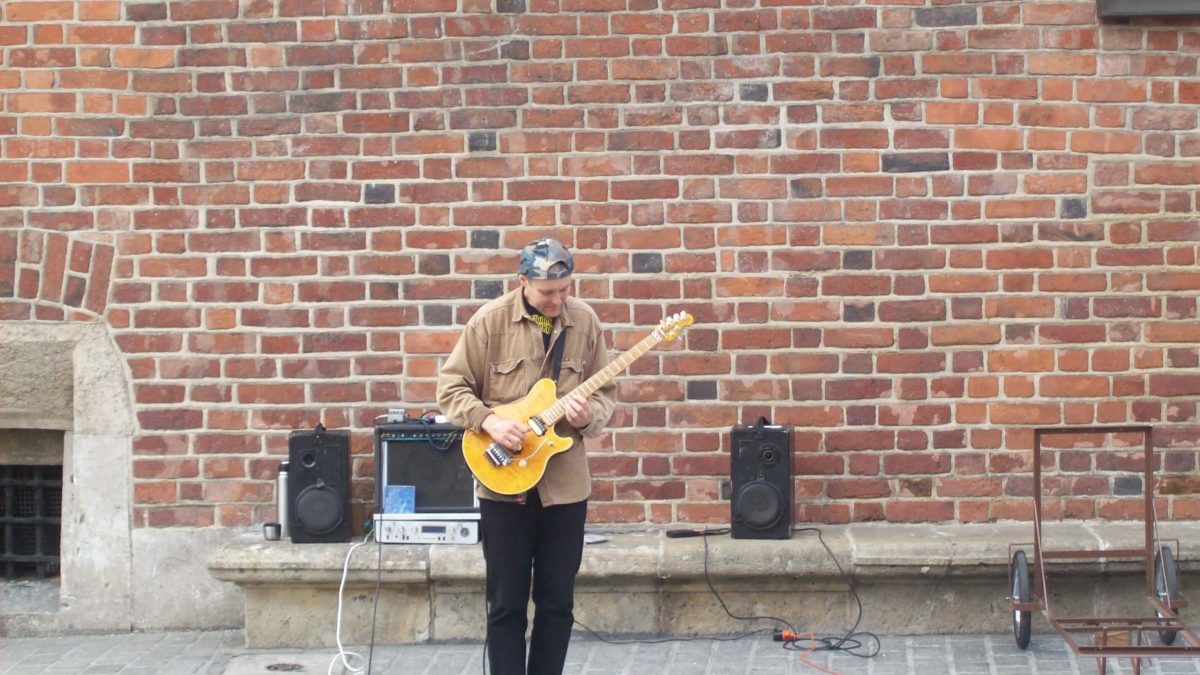 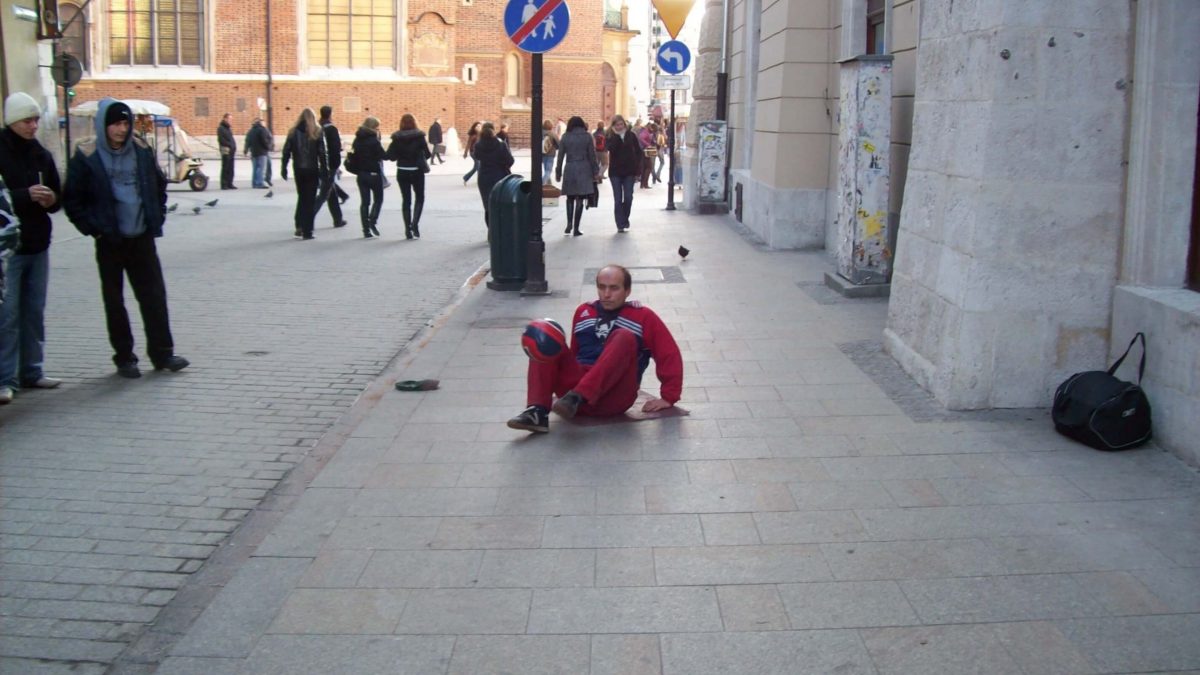 Snow started falling in the middle of October in Kraków.

I don’t think I saw the sun once from the first snow until the day I left Poland in November.

This became a typical view from my kitchen window: 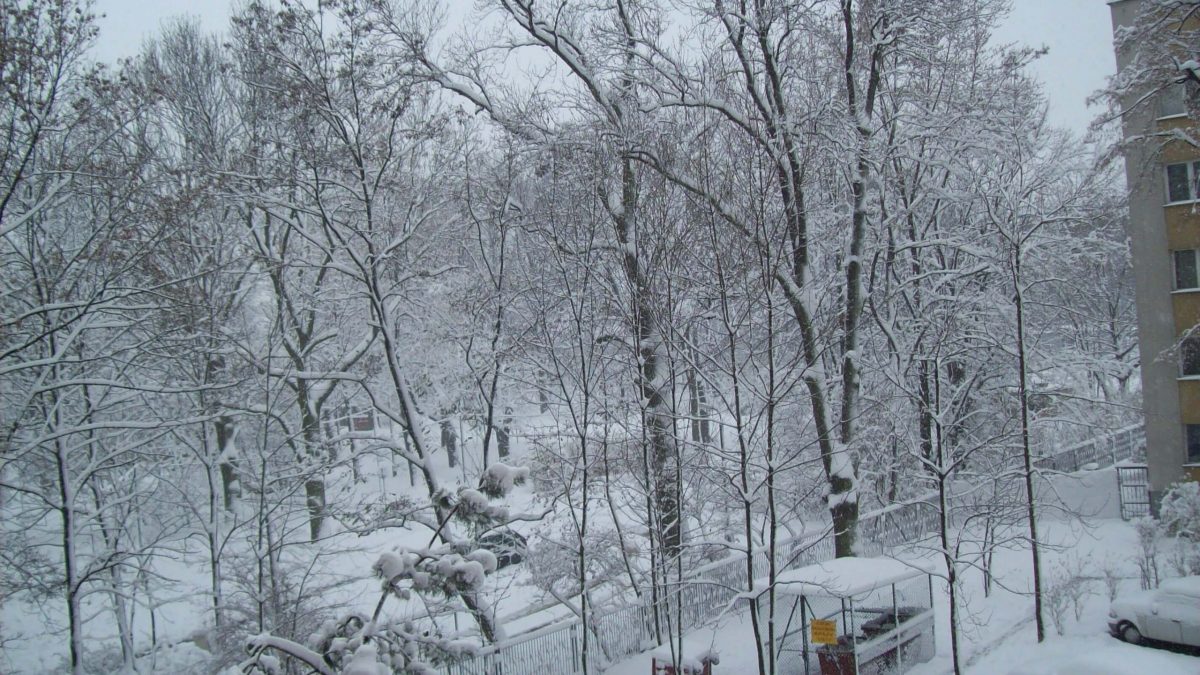 Thirteen years later, it seems that autumn time and winters here in Poland aren’t what they used to be.

This forecast for the end of October in Kraków is quite unbelievable:

I’ve always thought that if there’s no snowfall in the major Polish cities until December, then the idea of a “long winter” has already gone out of the window.

I wouldn’t be surprised if I didn’t snow in my city, Gdańsk, until January 2021.

In autumn 2007, though, the days were grey and snowy, and the nights were bitterly cold.

I’m not sure how I busked in such conditions. Gloves certainly didn’t help my frozen fingers.

Four months living in Kraków – The charm shall never fade away

Overall, I lived in Kraków for four months.

I never tired of walking around the Main Square, the streets of the Old Town and along the Vistula River by the Royal Wawel Castle.

I’ve only made very sporadic visits to Kraków since 2007.

As the saying goes: You can have too much of a good thing.