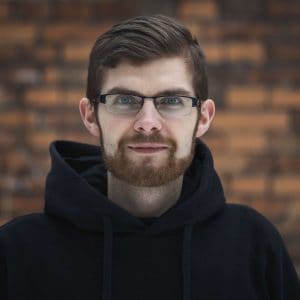 I could create a much longer list of this extraordinary man’s attributes.

Mr Bąbel has many projects on the go, including writing articles promoting the idea of continuous improvement for his popular blog Średnio Zaawansowany. He’s also a project manager for the charity Poland Business Run. More on this foundation later.

What prompted me to approach Kamil Bąbel for an interview was perhaps his most foremost preoccupation – Pieszo przez Kraków (On foot through Kraków). Indeed, Mr Bąbel intends to walk along every street of Kraków. He’s over halfway there.

It was thoroughly enlightening to talk with Kamil. Let’s check out what he had to say:

1. I’ve read about your desire to walk every street of Kraków. You’ve named the project Pieszo przez Kraków (“On foot through Kraków”). You’re over halfway there. What have you learned about yourself and the city of Kraków as a result of embarking on this walking challenge?

❝ I’ve learned that 3000 km is a huge amount of steps. 😊  But you need to take every single step to reach the finish line. No walk – no progress. So my mysterious life-changing from-the-street advice is: you have to move forward.

Exploring a city is like a relationship. As in relationships, you may know someone superficially, but if you start spending time with that person, you will get to know him or her better. You will learn about his/her strengths and weaknesses, you will notice the direction in which he or she is developing.  Being in someone’s company also changes us – we become like that person.

This is more or less my perspective on the project Pieszo Przez Kraków. I’m getting to know this city better and better, although I still don’t know much about it. I’ve learned that it lives. It is like a big, living organism. I’m so excited to see the display of social behaviour that the citizens of Kraków leave behind. I follow their traces and I wonder why they act the way they do. Searching for the answers to these questions is very engaging.

And what have I learned about myself? Almost three years after starting this project, I can still be as motivated as I was before I took the first steps. Back then, I expected it to get harder and harder. Nevertheless, I keep finding new reasons to continue this challenge.

2. I’ve read your post: “Why I burnt my bucket list”. For our uninitiated readers, a bucket list is a list of things you want to do before you die (“Before I die, I want to …”). The term was popularised by the Hollywood production of The Bucket List starring Jack Nicholson and Morgan Freeman.

Of course, we don’t want to start labelling certain nationalities for their outlook on life. However, in your conversations with your Polish friends and colleagues, have you noticed any general tendencies in Polish in people’s attitudes towards adventure and compiling “bucket lists”?

❝ I think it is similar across all nationalities. I know people who are obsessed with bucket lists. And there are people close to me who… don’t know what they are. We as a human race need to achieve. Every one of us needs to strive towards a goal. But sometimes we don’t have a goal. The invention of bucket lists has enabled us to “borrow” dreams from someone else. If this is a worthy and satisfying solution for someone – go for it. A list is just a tool. If it works for someone – I don’t see a problem. It just simply doesn’t work for me.

3. I’ve read your blog post Jak mniej myśleć i robić więcej? In the post, you describe the idea of ‘Decision fatigue’. This is the idea that after making many decisions, a person’s ability to make additional decisions suffers. You argue that people need to think less – there’s no such thing as the perfect choice in this world of unlimited choice. Moreover, you argue that people should implement a system of minimalism because we tend to have to make so many trivial and meaningless decisions in the environment that surrounds us. For example, “Keep this invoice, or throw it away?”, as you wrote.

Can you describe how living according to principles of minimalism has helped you to “think less”?

Also, how has “thinking less” helped you in your career and with some of the projects you’ve initiated, and adventures you’ve undertaken?

❝ Minimalism has become quite popular in recent years because it stands in opposition to consumerism. And, of course, this perception is ok. However, I look at it a bit differently. It is a philosophy. A philosophy that shifts the focus from the question: “What do you have?” to the question “Who are you?”.

You can have possessions, but you can have ideas as well. And having things or ideas is not equal to having space for something meaningful. That’s why people often lose sight of the “meaning of life”. They don’t have space for it! This is the way I understand minimalism.

There is a mechanism called the endowment effect. It confirms that owning things makes them more valuable to us. This also applies to one’s own thoughts. When someone comes up with a business idea, the first thing that comes to their mind is that someone will steal the idea from them. Therefore, the conclusion is – the less you have, the less you have to lose. This applies to both possessions and thoughts.

When I started to pay less attention to things and thoughts that don’t truly matter to me, space for things that mattered to me appeared. Walking all the streets of Kraków is one of them.

So the answer to your first question is simple: minimalism doesn’t automatically result in thinking less. Thinking less is minimalism (at least for me).

But you also asked me how it has helped me in my career, projects and adventures. Here is an example that is the perfect metaphor for minimalism:

When I go bikepacking*, it’s better to have less luggage than more. Of course, the lack of a pillow might make it less comfortable to sleep in a tent. In this microperspective, it’s better to have more luggage (i.e. a pillow). But if you look at what is most important in bikepacking – that is moving by bike – then having less luggage allows you to move faster and easier.

Another example – I ran an event in Kraków called the Night of Slides based on the Ignite Talk formula**. Essentially, participants have to give a five-minute presentation whereby 20 slides change automatically every 15 seconds. If you have only five minutes to present, you’re compelled to reject unnecessary off-topic rambling. You are 100% focused on saying exactly what it is you want to say.

* Bikepacking – In a nutshell, bikepacking is a multi-day tour by bike, completed on mixed terrain or entirely off-road. The rider carries their equipment on their bike

** Ignite – Ignite is a series of events where speakers have five minutes to talk on a subject. The main condition is that speakers have to refer to 20 automatically advancing slides, for 15 seconds each. Ignite started in Seattle, and it has spread to 350+ organising teams in cities, universities, governments and companies who have hosted thousands of events

4. You’re a project manager for the foundation Poland Business Run. Can you tell my readers something about this charity and what inspired you to get involved?

❝ The Poland Business Run Foundation helps people with physical disabilities and those who’ve had a mastectomy. We organise the largest charity run in Poland under the name – Poland Business Run. Until 2019, the Run was held in ten cities in Poland. From 2020, due to COVID-19 and restrictions on large sporting events, the run has been held in a safe virtual environment.

I started working for the foundation five years ago. In fact, running has always been one of my passions. I’ve finished eight marathons (including one where I ran backwards). Five of these marathons were in aid of charity. Apart from that, I’ve also volunteered and worked as a race organiser. The prospect of self-development in the area of large-scale event management is highly stimulating.

What I value most in my work is being involved in every aspect of the project, because it allows me to see the bigger picture. I can directly see the results of my actions. The second aspect I value is my team, which is small but very determined and goal-oriented.

5. You firmly believe in continuous improvement and are obviously very well-read. Still, which people you’ve met in your life have served as important role models?

❝ I can’t point to a specific person, but I was very influenced by the environment of the organisation – European Students’ Forum AEGEE-Krakow. I met many people there who shared my values – people who were doing extraordinary things – running marathons, writing books, hitchhiking around the world, and getting involved in other rewarding projects. At first, I was impressed, and then I thought – “if they can do it, so can I”. And that was the turning point that led me to where I am today. Nowadays, as an honorary member of the organisation, I’m able to inspire younger members and motivate them to achieve extraordinary feats.

Get in touch with Kamil Bąbel

Check out Kamil’s books (in Polish):