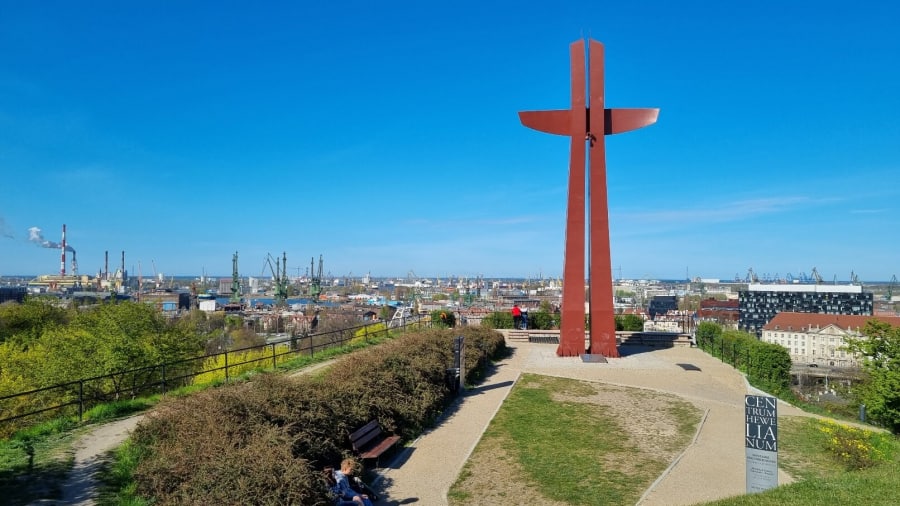 It took me over two years of living in Gdańsk to finally walk up the hill to the top of Góra Gradowa.

Looking up at the big cross at the top of the hill whilst milling around the streets of the Main Town of Gdańsk in recent years, I’d always wondered what the view was like from the top of Góra Gradowa.

Well, I’m glad my wife and I finally made it to the top of Gradowa Hill. It was a wonderfully clear day to catch a panorama of the Main City of Gdańsk and the historic Gdańsk Shipyard.

One of the simplest ways to get to the top of Góra Gradowa is to follow the tunnel running below the platforms of Gdańsk central train station (Dworzec Główny). Head up the escalators to reach the main bus station (PKS Gdańsk). Turn right and go up a set of stairs. Head towards the ghastliest looking block of flats you could ever wish to see. Walk to the end of the building and turn left. Eventually, you will reach the Northern Gate (Brama Północna). Here you can begin your ascent up to Góra Gradowa.

A brief history of Góra Gradowa

Modern historians have claimed that the origins of the city of Gdańsk are connected with Góra Gradowa. During fortification works in the seventeenth century, pottery, stone carvings and “old wood” were found. Unfortunately, records from this time are scant. Therefore, it’s tough to establish what these artefacts were.

Mediaeval coins and other small objects were also unearthed during the construction of the “Millennium Cross” on the Jerusalem Bastion in 2000.

Moving on, few people know that Gdańsk Protestantism was born at the foot of Góra Gradowa. In 1522, the young protestant reformer and priest, Jacob Hegge, began to preach on the slopes of Gradowa Hill.

Inhabitants of Gdańsk realised that any invading force who would occupy Biskupia and Gradowa Góra were free to bomb the city from the hills. Hence, nearby Biskupia Hill was fortified first. Gradowa had to wait until 1655 to be fortified, when bastions later called Notzkenberg and Kessel /Neubauer were built on the hill. Just in time – it wouldn’t be long before the Swedes invaded the Polish–Lithuanian Commonwealth.

The new fortifications supported the military activities of the royal troops of King Jan Kazimierz.

All in all, the main fortification of Góra Gradowa came to be an external defensive structure consisting of two semi-bastions (today called the Jerozolimski and Strzelecki bastions).

Let’s fast forward now to 1734, when the most important battle in the history of Góra Gradowa took place.

Gdańsk was the subject of a siege by the Russians and the French – the first time that the troops of France and Russia had met as enemies.

On the evening of May 9, 1734, eight thousand Russian soldiers stormed the ravelin of the Kessel / Neubauer Bastion. The several-hour battle ended in defeat for the tsarist soldiers – a remarkable victory for the army of the city of Gdańsk.

With the citizens of Gdańsk defending the legally elected Polish King, Stanisław Leszczyński, within their walls, neither Gdańsk nor the King could withstand the six-month siege. Disguised as a peasant, King Stanisław escaped two days before the city’s surrender on June 30.

Perhaps the next significant event in the history of Góra Gradowa was the French encirclement and capture of Gdańsk from the Prussians (19 March – 24 May 1807).

Góra Gradowa was one of the main areas of the fighting.

The times of the first French Free City of Gdańsk were a period of economic, social and cultural decline.

Gdańsk and Góra Gradowa in the mid-nineteenth century

The city passed into the hands of the Prussians again. In the first half of the 19th century, repairs were carried out on an ad hoc basis. Everything changed in the 1860s. Then, large-scale reconstruction of the hornwork* and the Notzkenberg Bastion began. In their place, the Fort Góra Gradowa was built.

The Second Free City of Gdańsk

The establishment of the Second Free City of Gdańsk took centre stage after the First World War. The area of ​​the Gradowa fort was demilitarised. Some of the facilities were demolished, while some buildings were handed over to students for dormitories and student corporations.

In the summer of 1939, German troops took over the fort area. The fort was manned by the German anti-aircraft defence throughout the war.

Before I move on to describe some of the main sights on Gradowa Hill, here’s an individual fragment of the 1601 painting “Grosz Czynsowy” by Anton Moeller.

Check out how Gradowa Hill dominated the city. It only goes to show the extent to which the hill had to be levelled during the reconstruction of the fortification in 1655.

Climbing up Góra Gradowa, two points of interest and the views of the Main City of Gdańsk and Gdańsk Shipyard from various angles captured my attention. Let’s dive in.

When emerging from the west side of the main bus station, one of your first ports of call will be the North Gate (Brama Północna).

The North Gate was one of the two main gates leading to the Prussian fort on Góra Gradowa. It was built in the years 1867-1874, i.e. during the great modernization of the fort. An original, paved road leading to the fort’s yard leads to the North Gate. Next to the gate you can admire the building of the North Guardhouse.

Despite incurring some minor damage, the North Gate has survived to the present day.

Comprehensive conservation work at the gate was completed in November 2015.

One of the most visible monuments in Gdańsk – the Millennium Cross – was unveiled on September 3, 2000, on the site of a World War II anti-aircraft gun.

This Christian cross is over 16 metres tall. It was created to mark 2,000 years of Christianity, those who had died in the city in previous centuries and the 1,000th anniversary of Gdańsk (the first written mention of the city comes from 997).

During the construction of the Cross, mediaeval coins and other small objects were found. 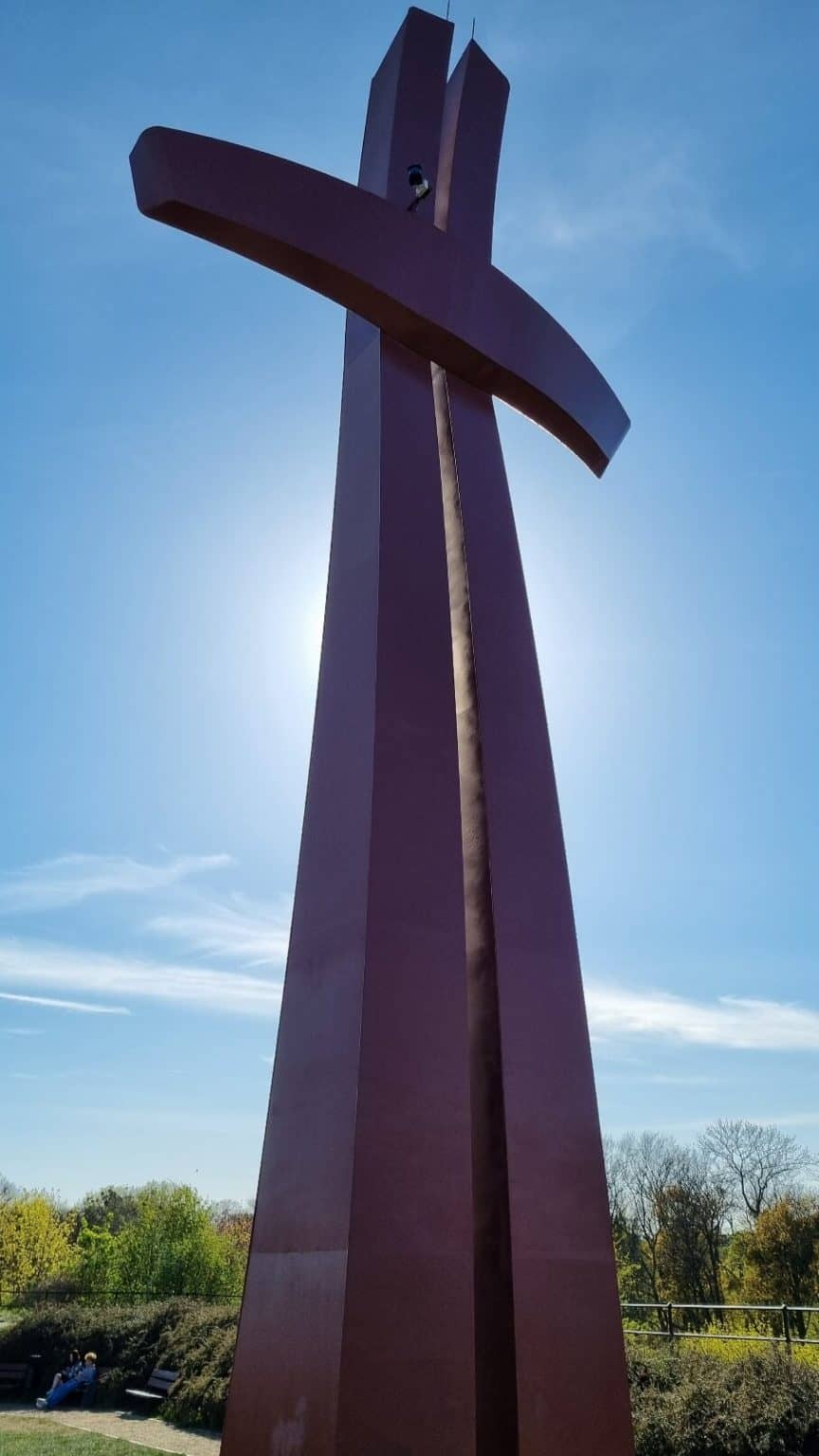 3. The views from Gradowa Hill

As you can see from the pictures and video below, you will revel in spectacular views of the Main City of Gdańsk and Gdańsk Shipyard if you walk up Gradowa Hill. 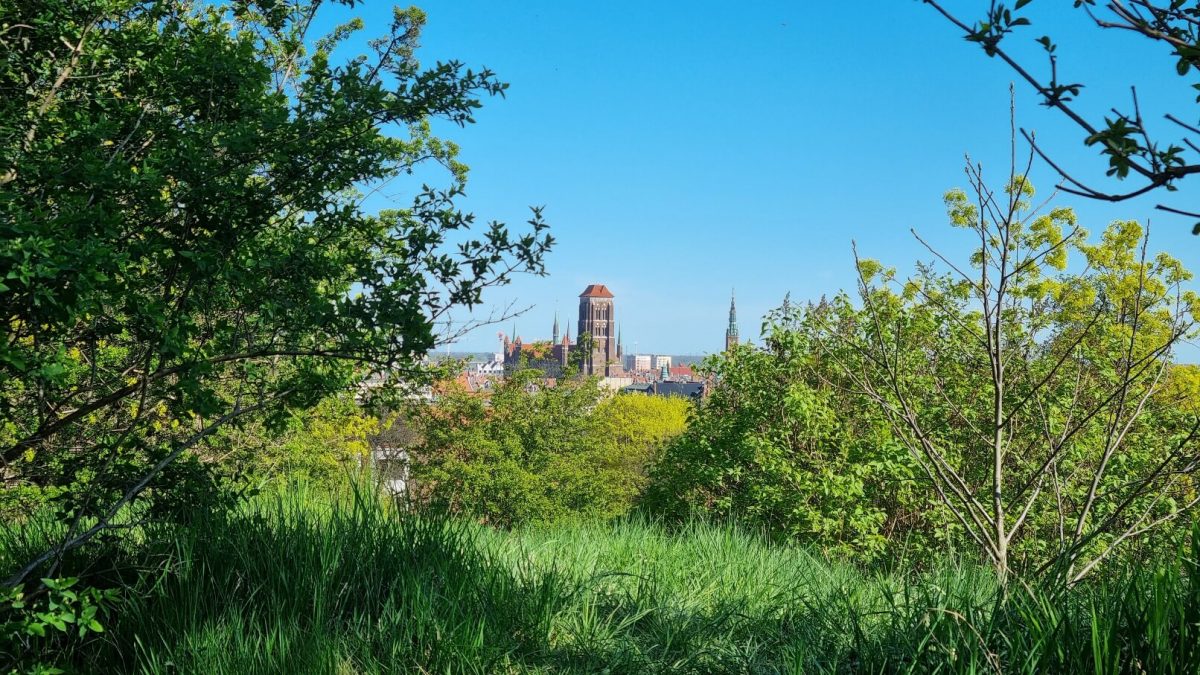 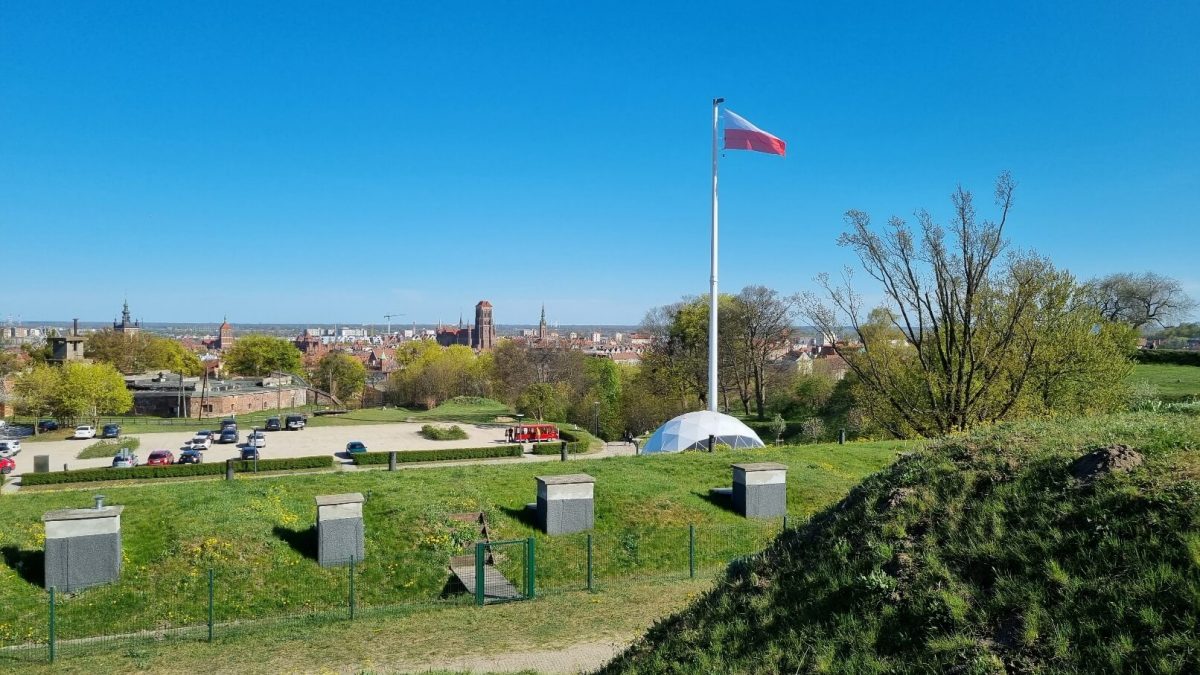 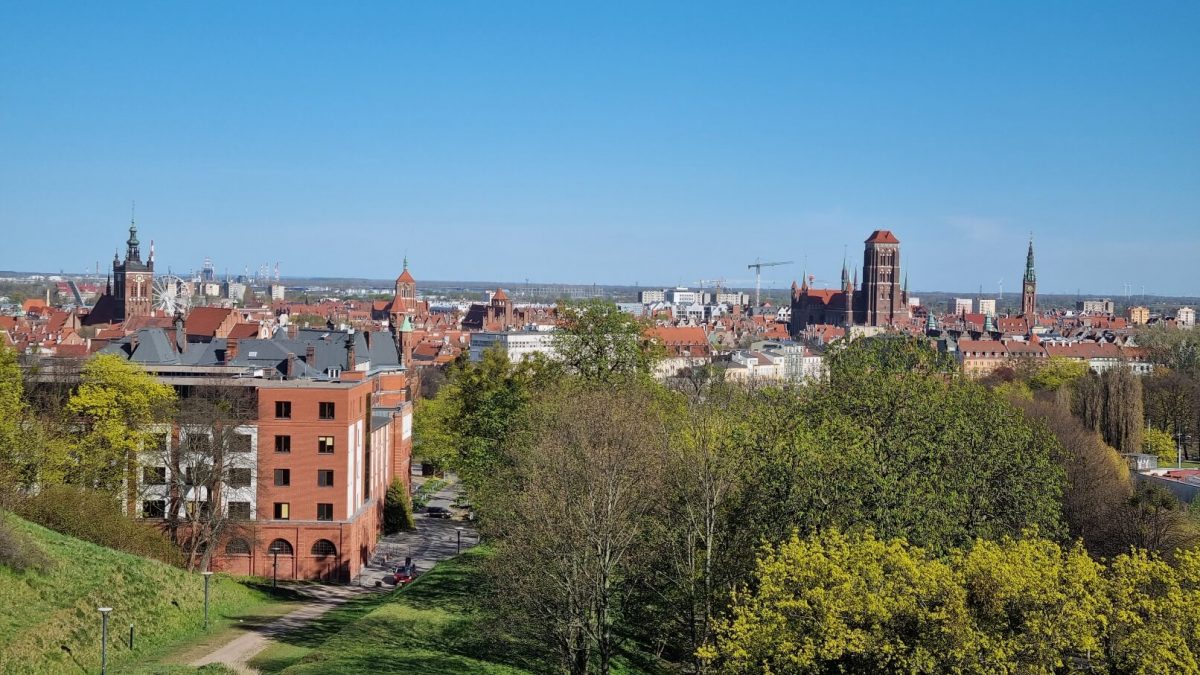 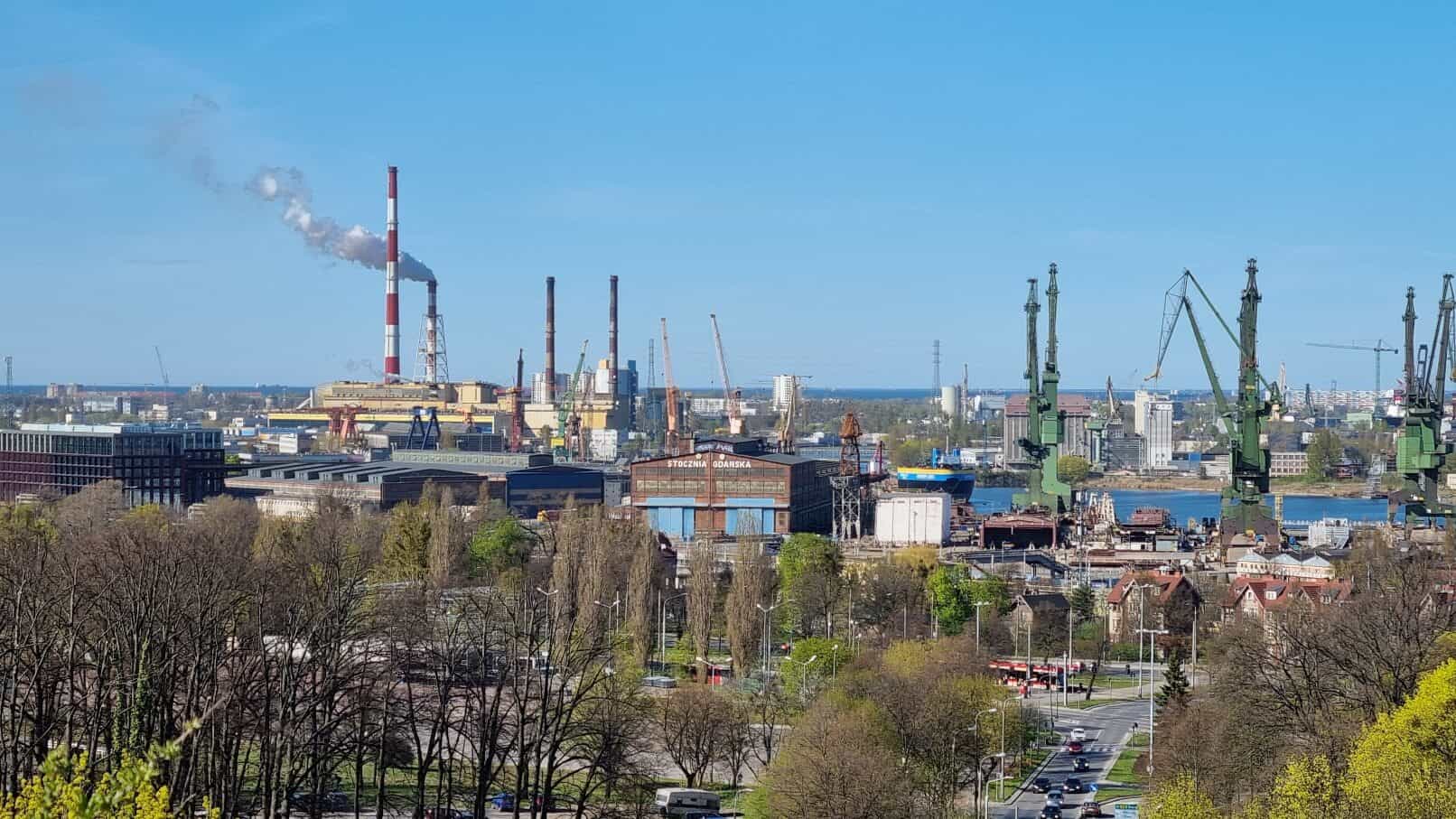 There certainly is plenty to explore on Góra Gradowa. I haven’t mentioned the Hevelianum educational science centre in this post because I plan to visit it in the near future.

Food for thought to end with. For the perfect afternoon itinerary, why not visit Pierogarnia Mandu to eat some delicious pierogi. Mandu is just a few minutes’ walk away from the tunnel leading up to the main bus station.