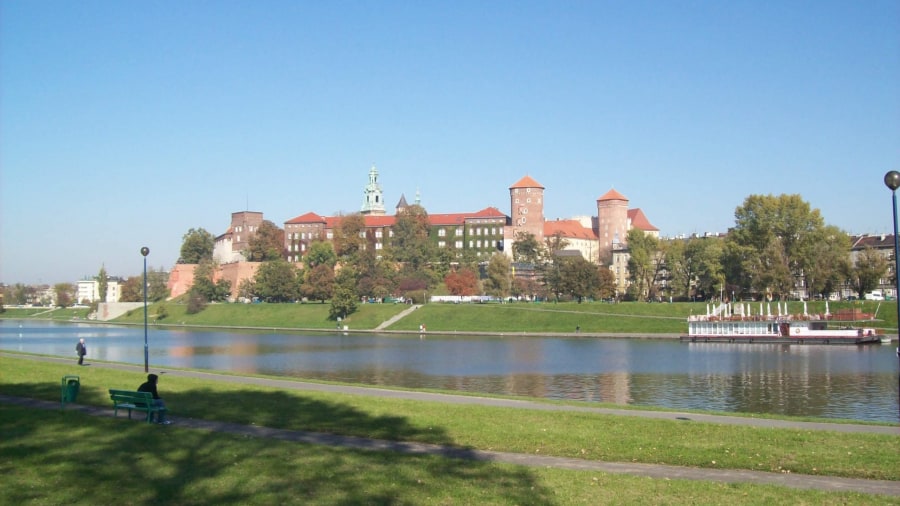 In my opening “reflections” piece for findingpoland.com, I wrote about the circumstances behind my first journey to Poland. In essence, a chance meeting with a Polish guy called Paweł at university changed the course of my life and career path.

Lying ahead of me was the tiny matter of a thirty-hour bus journey from Nottingham to Kraków. I was standing at the bus stop opposite Nottingham Railway Station, and Paweł eventually rolled up with a huge smile on his face.

Sitting on the bus prior to departure, I would describe the atmosphere as bleak. There was almost total silence. There was no stirring music – just the odd smatter of the Polish language – and the smell of vodka. Paweł was quite distant. I never did ask whether he was sad to be leaving the UK. Perhaps he had a lot on his mind with regard to readjusting to life in Poland again and organising everything that needed to be done.

Anyhow, I made several attempts to immerse myself into Polish culture on the bus – not by getting hammered, but through my willingness to learn rudimentary Polish. Indeed, I had succeeded in learning quite a few basic phrases and expressions before we left England.

My first journey to Poland – Reflections on culture shock

I have first-hand experience of how culture shock can affect a person in the blink of an eye. When I crossed the borders by bus between Bosnia and Croatia, Poland and Ukraine and, finally, Germany and Poland, I was startled at how the thin line between poverty and wealth could reveal itself within a distance of just fifty metres. Observing and noticing these changes came to be one of the essences of travelling for me.

Somewhere in France, I started playing hangman on some paper with a little girl named Malwina. Her mother, Joanna, told Malwina a few times not to bother me, but I said that I didn’t mind and that her daughter wasn’t being a nuisance. Anyhow, I soon got chatting to Joanna. Along with her husband, they were living in West Timperley, near Manchester. I spoke to her about her daughter’s English and I sensed that she was rather jealous and frustrated that her six-year-old daughter was more fluent than she was.

Time flew by. We eventually reached the German-Polish border. Elation and curiosity welled up inside me once we entered Poland.  Such was the marked contrast between the state of the roads in Poland and the UK, it was quite a culture shock to be bumping up and down on my backside every seven seconds. You can’t beat a good Polish pothole.

We eventually reached Wrocław, where Joanna lived. When we got out of the bus, she invited me to go and visit them. We exchanged contact details and planned to get back in touch later on during my stay. Malwina also gave me some pictures of animals she drew in the bus.

The bus rolled on southwards to Kraków. Soon after we had got out of the bus at the main station in Kraków, I just remember looking up at a brown tenement building, startled at its state of disrepair.

And that was that. The next leg of the journey saw us travel from Kraków to the town of Mszana Dolna, some 55km south of Kraków.