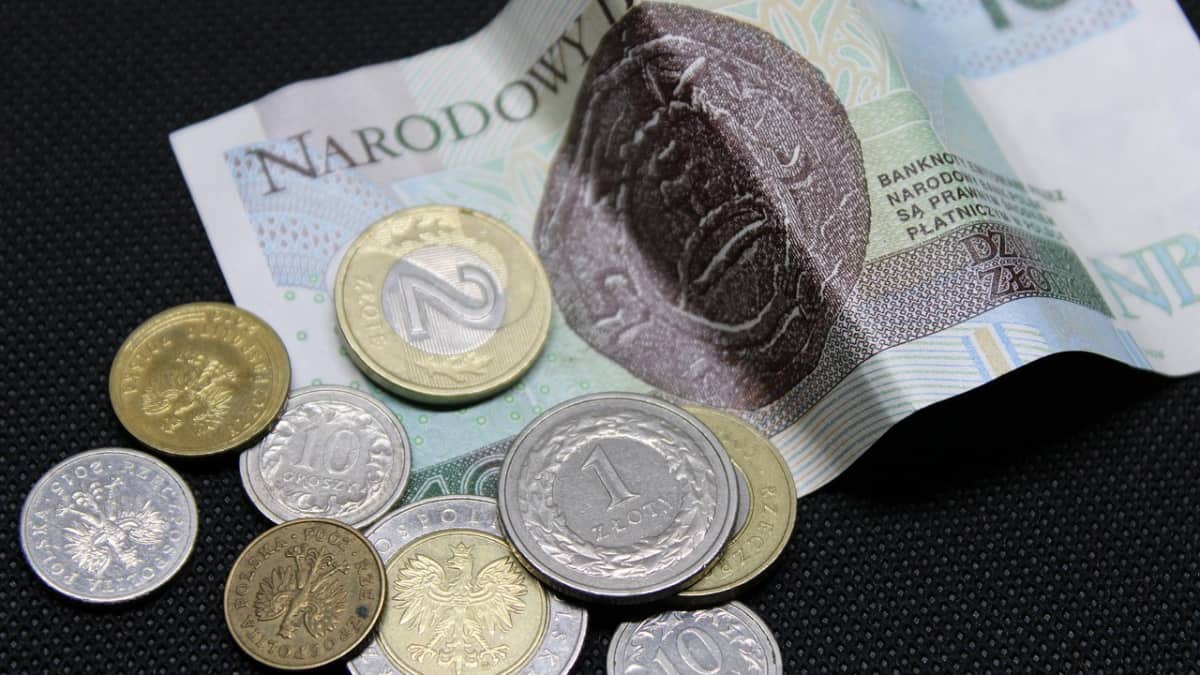 If you’ve just bought an apartment in Poland, it should quickly come to your attention that you have to pay monthly communal fees. This is the czynsz bill.

E-KARKOTEKA – FOR EASE OF USE 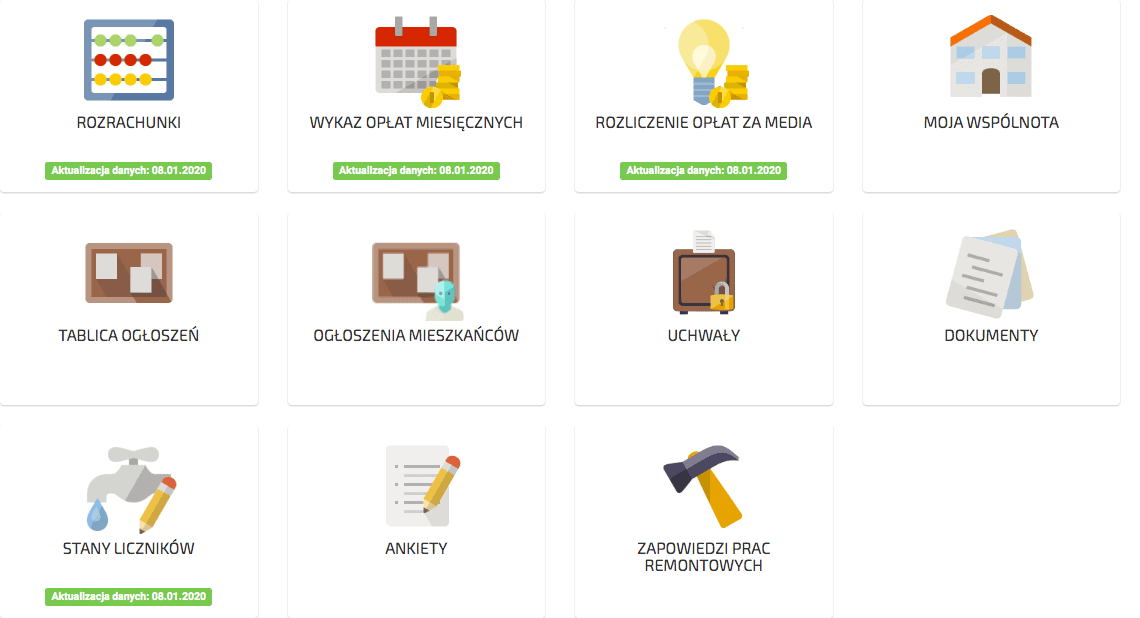 The company which maintains all of the buildings on my estate uses e-karkoteka.

Using a personal identifier and password, residents obtain access to their own online file where they’re able to view their obligations and payments. This information is available 24 hours a day, 7 days a week, via a standard web browser.

As can be seen in the screenshot below, the control panel enables tenants to check the following:

There are plenty of other features available to view, such as other tenants’ adverts and notices.

BREAKING DOWN MY CZYNSZ BILL 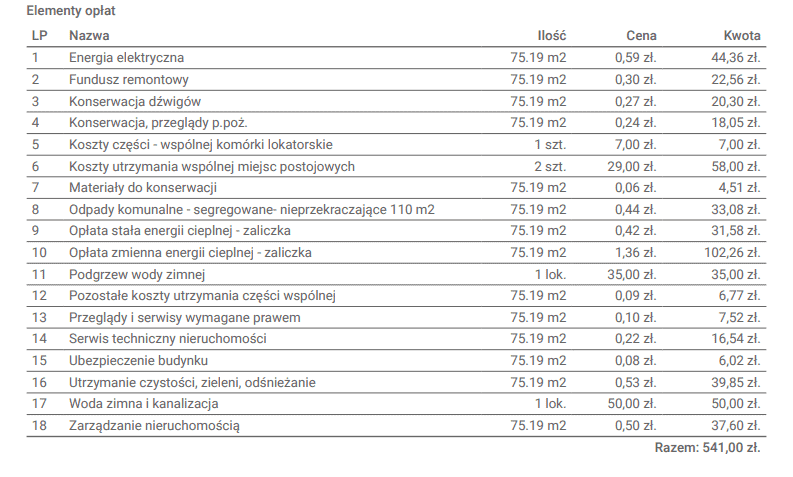 Breakdown of a czynsz bill

My monthly czynsz bills for October, November and December 2019, as well as January 2020, each amounted to 541 PLN. That’s around 130 euros for a 75m2 flat. I paid around 85 euros for a similar-sized flat in Serbia. Considering that I should earn more in Gdańsk than I did in Serbia, I am very satisfied.

If anything, I was quite surprised when the previous owner showed me one of the czynsz bills. I had expected the monthly total to be around 650-700PLN. Having said that, I’d only ever encountered one czynsz bill before in Poland when I lived in Łódź from 2012. Therefore, I had little idea of what to expect in Gdańsk.

If I hadn’t purchased the komórka lokatorska and two parking spaces from the previous owner (numbers 5 and 6 in the sample czynsz bill above), my czynsz bill would only come to 476 PLN.

Let’s translate some of the payments that I have to cover on a monthly basis (translated from the picture above):

no.1 – Electricity (in the building)

no.4 – Service fee for the fire prevention system and periodic fire safety review

no.17 – Cold water and canalization

My building maintenance company insists on receiving payments for czynsz until the tenth day of each month.

As you may see in the image below, landlords can login into e-karkoteka, click on “rozrachunki” and then hit the “zapłać” button. They can then link up with their bank to transfer the fee to the building services company.

Alternatively, landlords can send the czynsz fee directly to the building maintenance company via an online bank transfer. 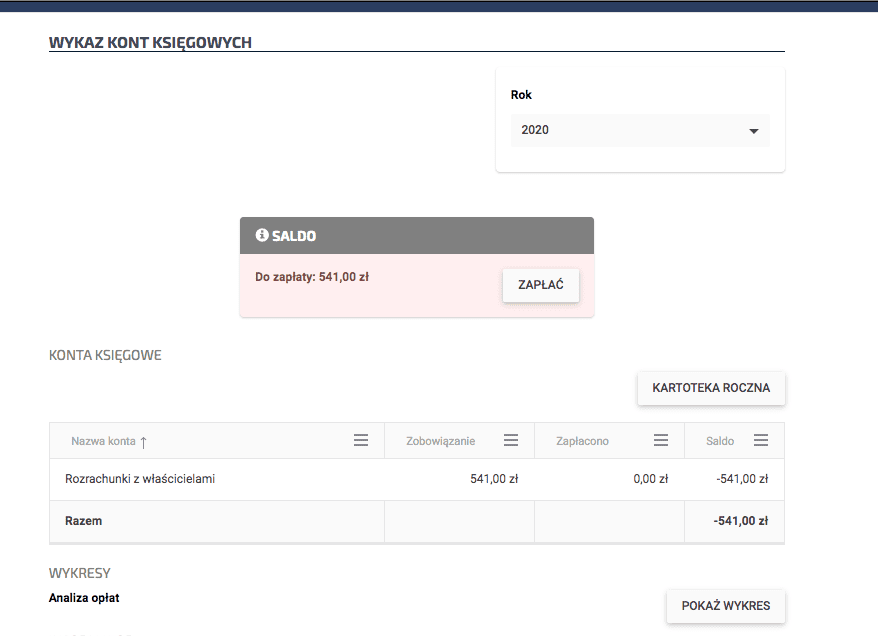 Overall, I don’t think the fee I pay is much at all. This is because I’m very satisfied with the state of the building I live in. Moreover, the underground garage and green spaces around the building are always clean and well-maintained.