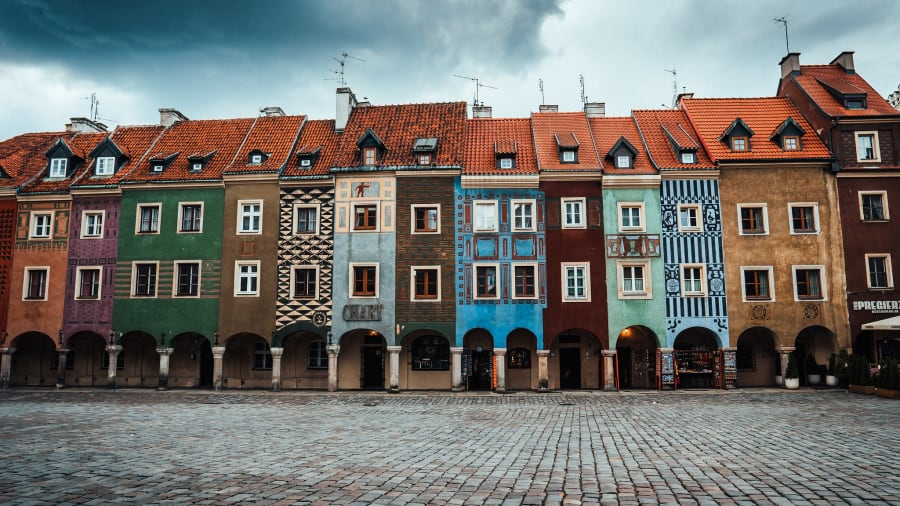 A Chip Shop in Poznań is author Ben Aitken’s memoir of his time working in a fish and chip shop in Poznań. Part memoir, part travelogue, A Chip Shop balances personal musings on love, attraction, and camaraderie, with heartfelt cultural impressions.

Ben Aitken won me over with his unabashed nature and affinity for cultural immersion. Let’s dive in to see what Ben got up to in Poznań and Poland.

So why Poland? And why Poznań?

‘So, why Poland?’ Frankly, it’s one of those ‘How long’s a piece of string’ type questions? Do Poles assume that Poland is such a poor country with zero opportunities when they ask it?

In the main, it was “curiosity” that took Ben to Poland. In essence, he wished to embed himself in the ordinary lives of Polish people in order to evaluate and observe Poland’s social fabric. Ever the storyteller, Ben’s goal was to “find stories in buildings, stories in people.”

The author claimed that he had “grown tired” of the UK and its associated “comforts” and “nice routines”. Hence, he wanted “to be alone and abroad … to have my character reset.” Some readers might assume he was running away from something. However, I don’t think it was the case. After all, we all deal with the monotony of daily life in different ways. Besides, Aitken, as an inquisitive and talented writer, saw his chance to pen stories in Poland and alter his routine at the same time. Therefore, moving to Poznań was a win-win situation for him. And why Poznań you may ask? Actually, Aitken had never heard of the place and it was the cheapest flight. This reminded me of the time I went to work in Płock.

I’ve written a few posts on this blog which detail my early days in Poland. Reflecting on those times, I fully understood where Aitken was coming from with his comments about growing tired with life in the UK and the “nice routines” there. Certainly, with my first journey to Poland and getting used to a wholly new culture, I sought to find myself – to have my character reset. Overall, it’s an effortless task to empathise with Aitken, especially when you’ve been in his shoes. Sometimes I felt like I was reading my own memoir.

A Chip Shop in Poznań is littered with Aitken’s tongue-in-cheek encounters with the Polish language. With regard to learning Polish, his back was against the wall from the get-go due to his mindset: “There are no two ways about it, it will be a hard language to learn.” In terms of acquisition, every language presents its own unique challenges, and Polish is no different. As Aitken pointed out: “Not only must I learn new letters – e and a and o and s and c have alternatives that are accessorised with tails and fringes – but I must also contend with familiar letters arranged in new ways, with the result that when one finds oneself in front of a door, and is invited to pchać, one doesn’t know whether to push or pull.”

I’m not having a pop at Aitken. When I saw Polish words like przepraszam (excuse me) and dziękuję (thank you) for the first time, I was a little taken aback. Indeed, there are lots of z’s and funny letters with tails and fringes in Polish words. However, not for one moment did I think Polish would be a hard language to learn. If you have a self-defeatist mindset when it comes to learning obscure looking languages, you’re on a hiding to nothing before lesson one commences.

When it comes to meeting Jędrzej, a friend of Aitken’s employers at the language school he agreed to work for, we once again see the author’s humorous take on the Polish language shine through: “What a queer set of letters. Surely the word is an expletive or imprecation, the noise Poles make when something goes wrong. A Pole drops a platter of dumplings – ‘Jędrzej!’ A Pole hears disappointing news on the radio – ‘Jędrzej!’

Overall, Aitken won’t amaze you with his polyglottal abilities. Nevertheless, there is a certain amount of charm to his self-deprecation and rudimentary approach to learning the basics of Polish.

Mixing with the locals and cultural immersion

Aitken’s unabashed nature meant that he could partake in cultural immersion in Poland on a grand scale.

The author was not afraid to mix with the locals to understand their mentality a little better. For instance, chapter 12 highlights Aitken’s experiences roaming around Freedom Square in Poznań to hear people’s opinions on Brexit. Interestingly, opinion was split between those who like the EU for its money and those who thought the EU is just Germany.

In A Chip Shop, there’s no finer example of cultural immersion than Aitken rocking up at a random house on Christmas Eve to ask to enter for dinner. Traditionally, Poles prepare an extra chair and plate at the table in case an unexpected visitor turns up. Unfortunately, there is no consensus among Poles as to the roots of the tradition. However, you can check out the three most probable hypotheses in this article.

My visualisation skills were working overtime when I pictured Aitken pounding “the surrounding streets … trying to identify the most likely house and practising my lines.” Aitken eventually found a house and the hosts somewhat gingerly welcomed him inside. Well, it’s up to you now to buy the book to find out what happened.

Food is at the heart of everything in a culture and Aitken respected that in Poland. When he wrote about his plans to make bigos, commonly known as “hunter’s stew”, I almost felt jealous. Not because I’m a stewy kind of guy, but rather because I’ve never really attempted to make any signature Polish dishes myself. I do wonder – have I immersed myself enough in Polish culture? I’ve been to lots of places. I’ve blessed food on Holy Saturday. However, I haven’t got too much to say about Polish food. The only consolation is – I love Gołąbki. These are cabbage leaves stuffed with spiced minced meat and rice.

A real sense of adventure and a willingness to muck in

Linked to Aitken’s affinity for cultural immersion was his sense of adventure.

The author’s “few do it, so I’ll do it” attitude shines through in A Chip in Poznań. This was the case with Aitken’s jaunt to Katowice. Generally, the city is “held to be ugly and disappointing”. Indeed, Katowice is not a tourist magnet, not really a place to rival magic Kraków just down the A4 motorway.

With this visit to Katowice, the author’s voice and personality jump off the pages. This is Aitken – the ardent traveller who, in his own words, prefers to put travelling before travel writing. Such an attitude explains why he didn’t read up on Katowice’s socio-economic situation in advance of going there. It’s an interesting point: “too much pre-emptive research takes away some of the joys of travel – surprise, revelation, chance.” Therefore, Aitken’s ignorance shouldn’t be mistaken for laziness nor disrespect. It’s a deliberate ploy. Frankly, I understand him. We all need to “lend a bit of mystery” to our wandering. Overall, there’s something raw and exciting about Aitken’s writing. Facts are fine, but a book needs some unpredictability and unpreparedness to make it a page-turner.

Towards the end of his stay in Poland, Aitken stayed with some nuns in Staniątki, near Kraków. He also gets lost in freezing conditions in the Polish mountains – without much daylight to spare. Finally, nothing beats milking Polish cows, as Aitken did in Ełk, north-east Poland.

Concluding thoughts – Been there and done that

Reading A Chip Shop, I sometimes felt like I was reading my own memoir. Eerily, so many of Aitken’s observations and experiences brought back memories of my early days in Poland. Boy can I relate to the helplessness he felt when he began teaching English to kids!

Another point is that Aitken really got me wondering about whether I’ve  immersed myself as much as I could have done in Polish culture. From exploring the Polish mountains to sampling and making traditional Polish dishes, there’s still so much for me to do here.

In summary, as Georgina Monk from the London Magazine put it, A Chip Shop in Poznań is “an engaging romp through Polish culture”. Let’s cherish those sentiments to round things off.