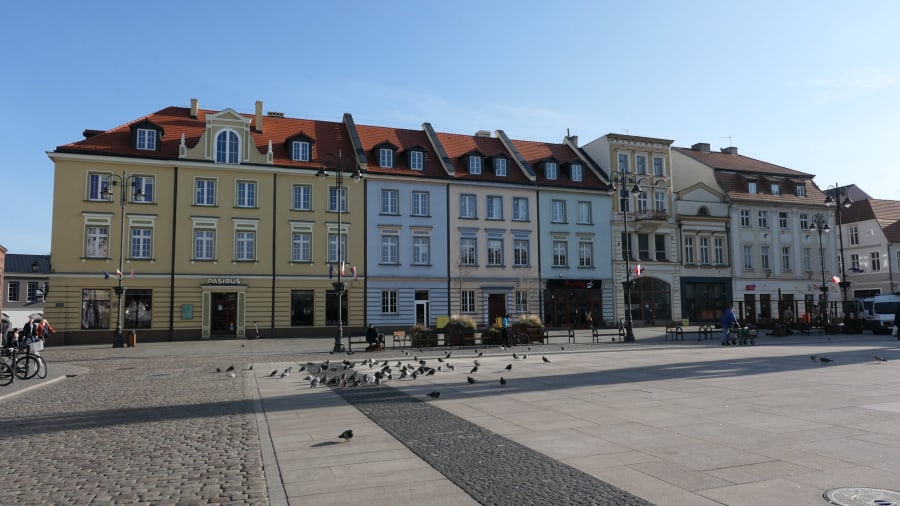 My first ever visit to Bydgoszcz in November 2021 has helped me to create this mini guide of must-visit sights in Bydgoszcz Old Town.

Frankly, I’m amazed that I’d never visited Bydgoszcz in all my time living and travelling in Poland between 2005 and 2013.

After all, I lived in both Łódź and Płock for two and a half years in total. Both of these cities are within reasonable travelling distance of Bydgoszcz.

Anyway, without further ado, let me crack on with a list of things to do in Bydgoszcz Old Town.

1. Take in the Brda River from Jerzy Sulima-Kamiński Bridge

My wife and I stayed in Hotel Mercure Sepia which is only around 250 metres away from the Old Town Bridge, aka Most Jerzego Sulimy-Kamińskiego.

It’s the oldest bridge structure in the city. The first bridge in this place was built in the 14th century, while the existing one was built in 1960-1961.

The bridge offers a great vantage point of the Brda river and surrounding area. Indeed, It’s possible to see the many museums and old buildings that have been renovated in recent years.

To this day, a few historical granaries have been preserved in Bydgoszcz. Only four date from earlier than the nineteenth century. They’re all on the banks of the Brda river, all half-timbered and all open to the public as museums.

The three granaries at 7 – 11 Grodzka Street are perfectly visible from Jerzy Sulima-Kamiński Bridge. Built in the years 1793-1800 by the merchant Samuel Gotlieb Engelmann, the original complex in Grodzka Street consisted of five granaries in a row. However, fire devastated two of them at 13 and 15 Grodzka Street in 1960.

Perhaps the most characteristic granary in Bydgoszcz is the one closest to the bridge. It’s often referred to as the “Dutch” granary due its low height and strongly sloping roof.

Aside from the old buildings, you can see the ‘man crossing the river’ (Przechodzący przez rzekę) sculpture stretching across the Brda River. Essentially, the ‘tightrope walker’ is a sculpture of a naked man balancing on a wire while holding two arrows and a pole. The sculpture was unveiled on May 1, 2004, – the day Poland joined the European Union. 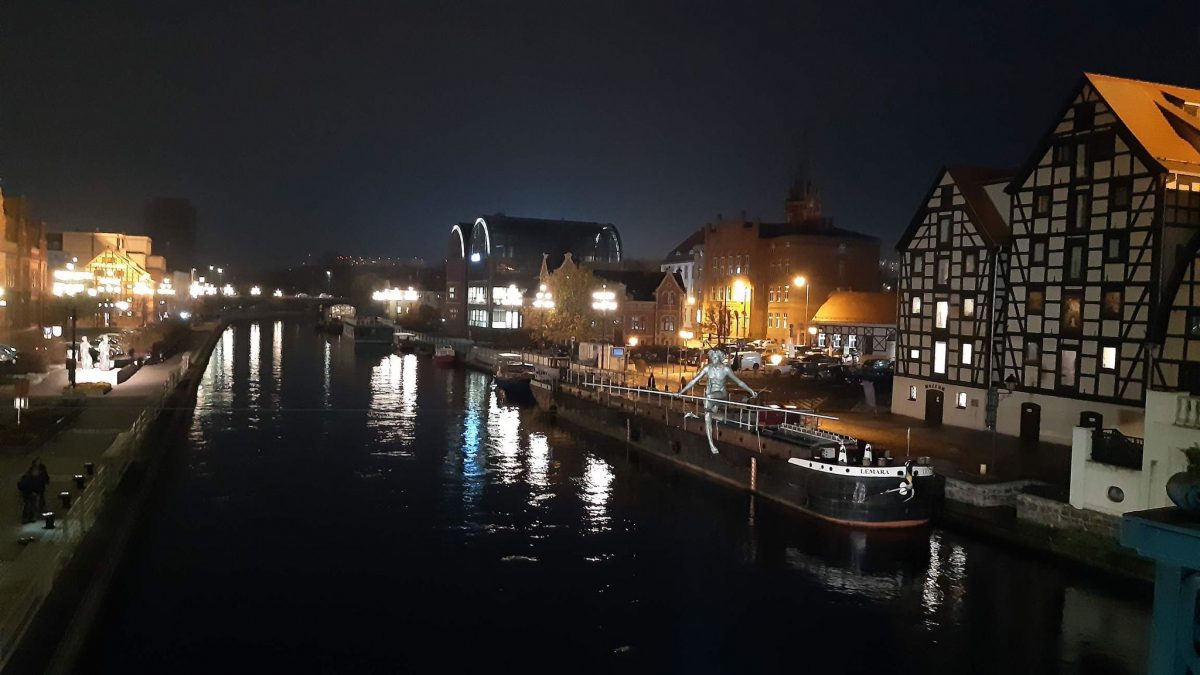 As with many main market squares in Poland, the Old Market Square of Bydgoszcz is packed with history.

The beating heart of Bydgoszcz is the City Hall.

Erected between 1644 and 1653, the modern day City Hall was originally a Jesuit College. In the 17th century, the building contained apartments, a school with four or five classes, a hall adapted to stage theatrical productions and a music office for members of the school orchestra.

On all four sides of the square, there are some stunning buildings representing various architectural styles, from eclecticism to neo-classicism.

Here’s a view of the eastern frontages: 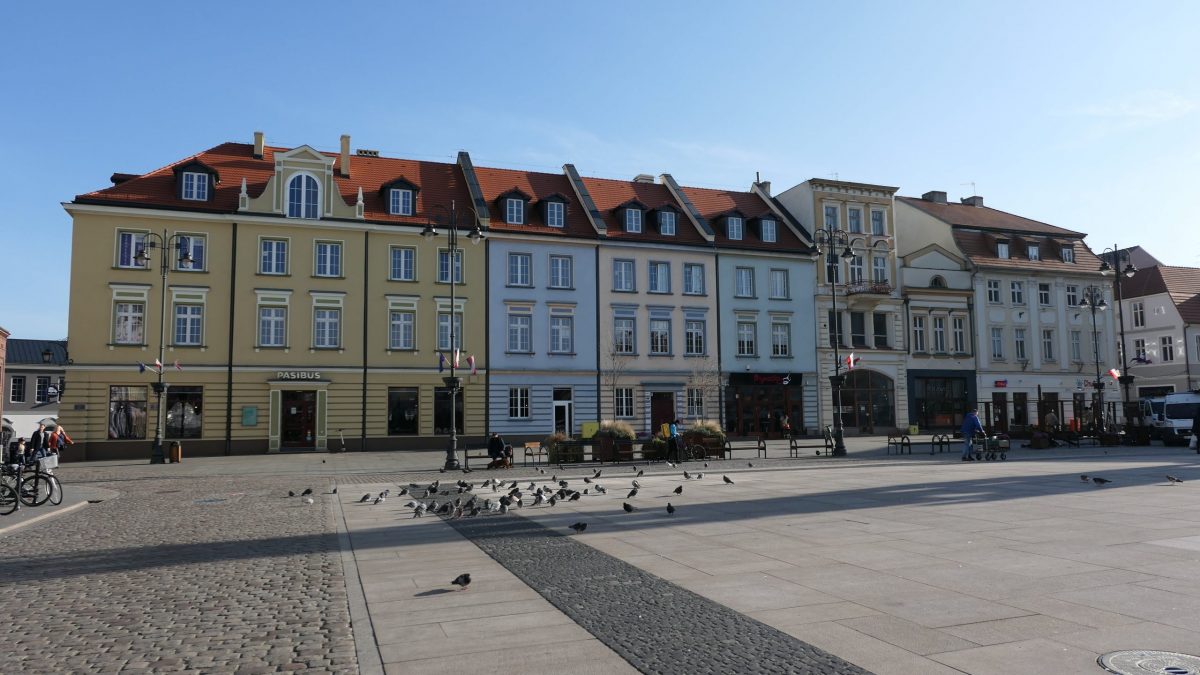 From the Old Town Market Square, we walked south to Długa street – the longest street in the Old Town district.

Długa street was laid out in the middle of the 14th century, at the time of the creation of the chartered city of Bydgoszcz.

Until the turn of the 19th century, Długa was the longest and the busiest street in Bydgoszcz. It connected two city gates – the Kujawska Gate to the east and the Poznan Gate to the west.

The houses on Długa Street are very stylish in nature. This fact reflects its importance as a trade and commercial thoroughfare in the Old Town. Most frontages were constructed in various architectural styles in the 18th and 19th centuries. 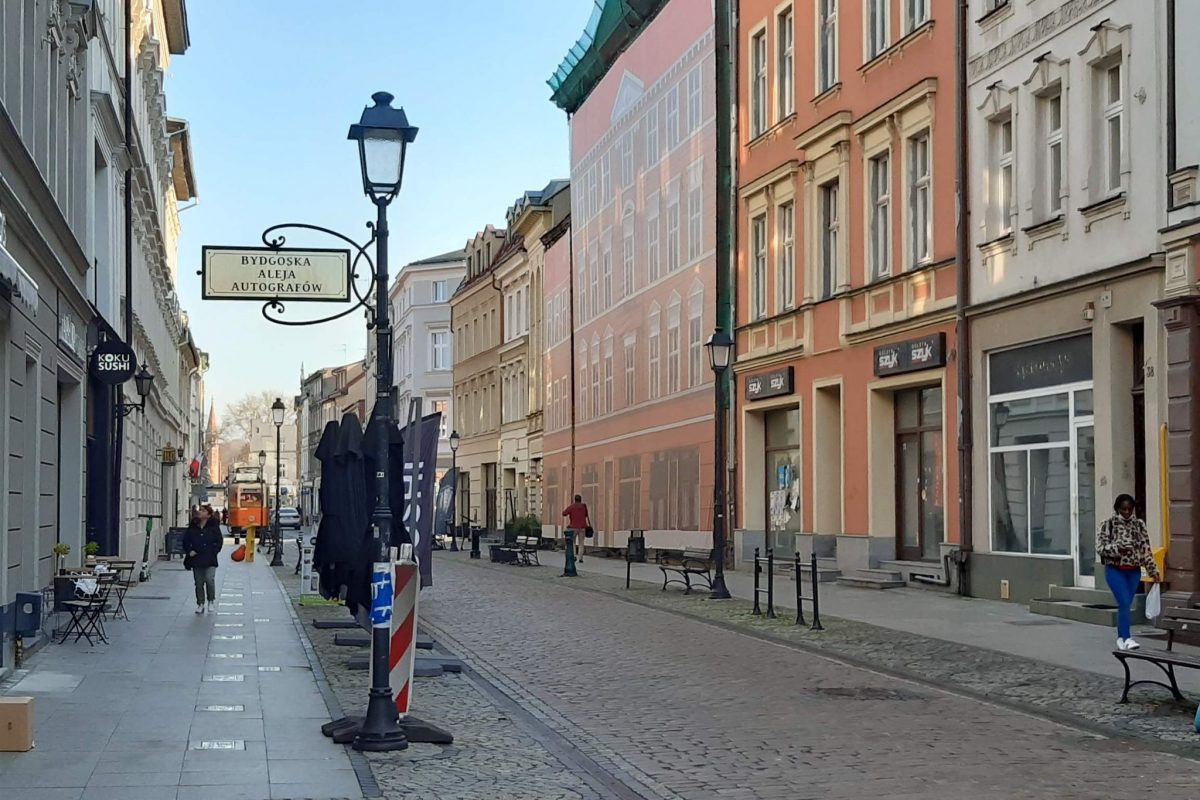 Bydgoszcz Autographs alley is a collection of relief signatures lodged into the pavement of Długa street.

Designed by local artist Michał Kubiak, these granite plaques display only the most meritorious Poles.

The first autograph was revealed on December 6, 2007. All autographs unveiled in subsequent years have traditionally respected the same date.  In fact, this is the day of Saint Nicholas, the patron of Bydgoszcz.

Some of the most famous people’s signatures on Długa include:

4. Stroll around ‘The Venice of Bydgoszcz’ by the brda

Of all the must-visit sights in Bydgoszcz Old Town, Wenecja Bydgoska is up there with the best.

To get to the Venice of Bydgoszcz, we sauntered down the Magiczne Schodki (Magic steps). These steps are located on Wełniany Rynek between numbers 6A and 7. 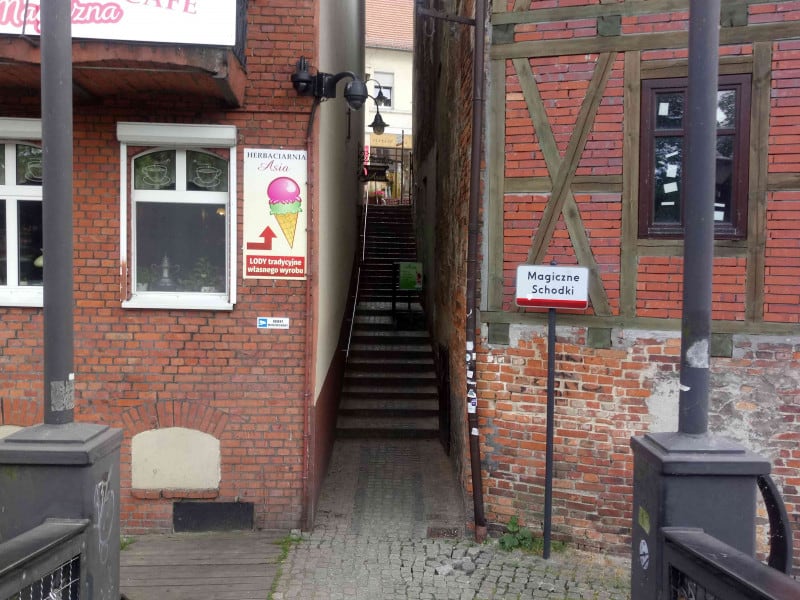 We soon emerged onto the bank of the Brda. On the other side of the bridge – Mill Island. However, we headed left to catch a piece of The Venice of Bydgoszcz.

Essentially, Wenecja Bydgoska got its name due to the vast number of picturesque blocks of old houses, annexes and outbuildings. A characteristic feature of these tenement houses is the immediate vicinity of the Brda river.

If you’ve been to Venice, you’ll soon spot the similarities.

A brief history of the Venice of Bydgoszcz

The history of The Venice of Bydgoszcz began in the 19th century. At the beginning of the century, there were single buildings on the steep bank of the river. Over time, tenement houses, workshops and plants popped up by the riverside. Initially, the areas located directly on the river were used as gardens.

By the end of the 19th century, the landscape of The Venice of Bydgoszcz assumed a distinctly residential and industrial character. The owners of the tenement houses were merchants, with a smattering of craftsmen and factory owners.

Dwellers carried out various activities in the houses throughout the nineteenth and twentieth centuries. For instance, there were packaging and cigarette factories, the “Lukullus” chocolate and confectionery factory (1925-1939), bakeries, slaughterhouses, printing houses (including “Dziennik Bydgoski”), a sawmill, restaurants and dye work.

At the beginning of the 20th century, the fully built-up frontage of tenement houses, due to their original location, became a tourist attraction of the city, eagerly recorded on postcards and paintings by painters.

Buildings from the end of the 19th century are generally in their original condition. It’d be fair to say that some of the houses are in need of some serious renovation. 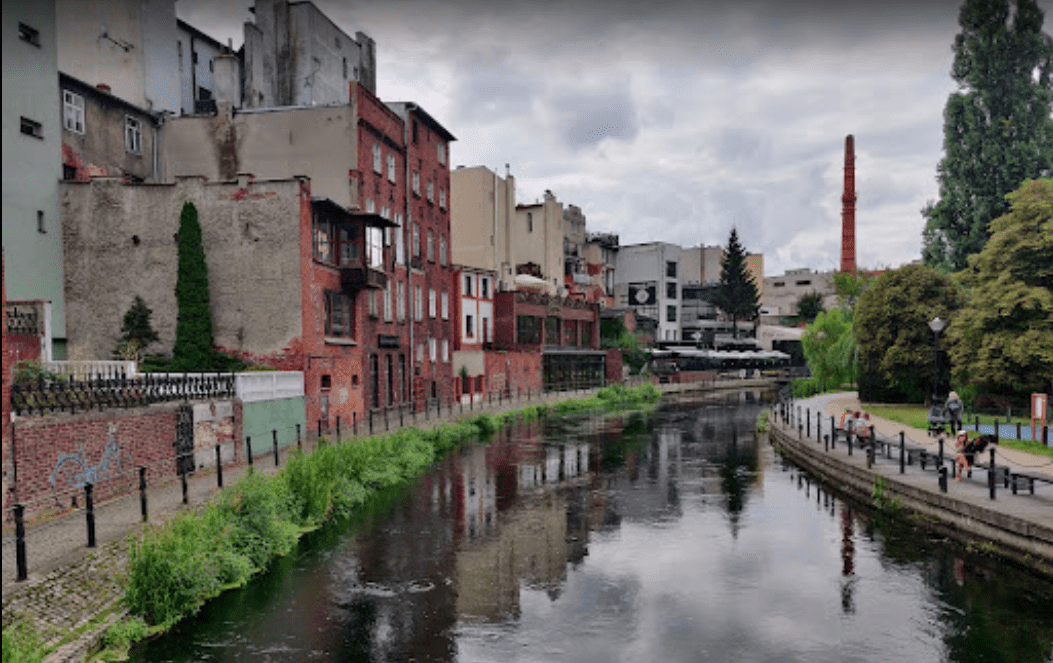 5. Feel the history on Mill Island

So we arrive at the last of our must-visit sights in Bydgoszcz Old Town – Mill Island (Wyspa Młyńska).

Walking over the Venice of Bydgoszcz footbridge in the southern part of Mill Island, there is a real feeling of travelling back in time. Immediately, I noticed a scattering of granaries, old mills and storehouses. This one-of-a-kind industrial landscape bursting with history becomes even more apparent with every northward step you take after crossing the Brda.

Perhaps the most famous and eye-catching industrial facilities on Mill Island are the Rother’s Mills (Młyny Rothera).

The name of the complex derived from the Prussian Minister of Agriculture, Christian von Rother, who initiated the construction of a modern mill.

By 1851, construction of the entire Rother facility was complete. The project comprised not only a huge production building, but also:

The Rother’s Mills complex consists of three blocks: the main building and the west and east wings.

Ultimately, the Mills will house both permanent and temporary exhibitions. Moreover, conference spaces, coworking rooms, as well as culinary and educational laboratories with a popular science laboratory, will also be made available to the public.

The Red Granary is the largest preserved granary in Bydgoszcz.

Built in 1861, it is a massive, four-storey, brick building with a basement.

Built in the 1790s, the White Granary is the oldest preserved building on Mill Island. The facility operated as a grain warehouse until 1974.

Since 2009, the building has been used for archaeological collections of the Leon Wyczółkowski Regional Museum in Bydgoszcz.

When it comes to the must-visit sights in Bydgoszcz Old Town, I’ve nominated my top five based on what I saw in the Old Town district and Mill Island.

I look forward to returning to Bydgoszcz in the future to explore the Music District and check out museums, such as the European Money Centre with its collection of coins, banknotes and medals related to the history of Poland from the Piast dynasty to the present day.