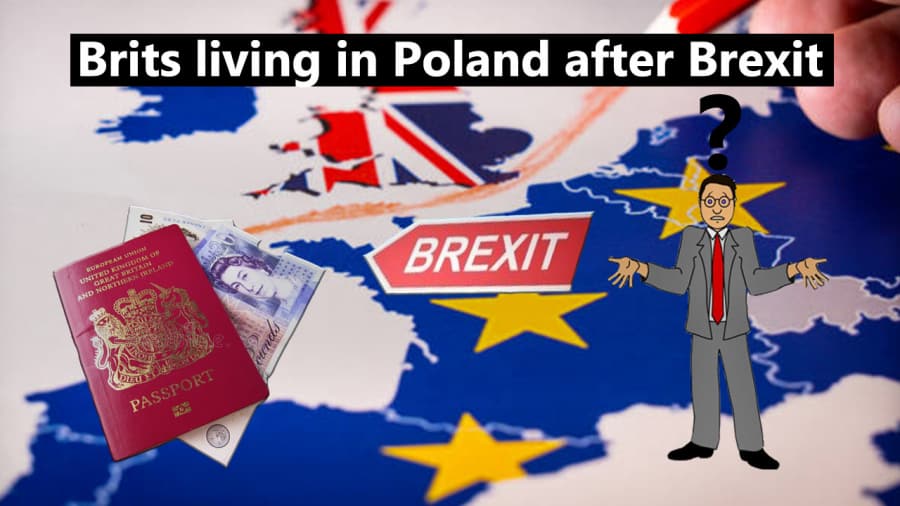 This time around, I briefly reflect on how changes to EU law, as well as the rules of residence and work in Poland, affected Brits living in Poland after Brexit.

What was the ‘transition period’, and how did it affect British citizens living in, or travelling to, Poland?

The UK formally left the European Union on 31 January 2020.

On February 1, an 11-month transition period came into force. Ending on 31 December 2020, this transition period was essentially a standstill period intended to uphold the legal status quo while the UK and the EU negotiated additional arrangements.

During the transition period, UK nationals were free to travel into Poland for any purpose and to undertake any work or business activities on the same terms as citizens of Poland. These rules also applied to all other remaining EU countries.

What was the Withdrawal Agreement, and how did it protect Brits living in Poland before the transition period ended?

In the English language, at least, the Withdrawal Agreement (WA) is a 177-page PDF document.

Essentially, the Withdrawal Agreement safeguarded the residency rights of EU citizens living in the UK, and the one million or so UK nationals in EU countries, at the end of the transition period.

Citizens’ rights: Who was covered?

What about rules regarding the residency rights of Brits living in Poland during the transition period?

In accordance with the rules regarding the residency rights of UK citizens and the members of their families on the territory of Poland throughout the transition period, they were not issued with residence permits and residence cards, provided under the Act of 12 December 2013 on Foreigners, as prescribed in the Polish Journal of Laws.

UK citizens were obliged to register their stay as an EU citizen. The authorities issued a certificate.

During the transition period, family members could apply for the following documents issued under the existing rules:

After five years of continuous residence, a resident of the United Kingdom has the right to apply for a document confirming the right of permanent residence.

What bureaucratic obligations did Brits living in Poland after Brexit and the transition period encounter?

UK citizens and their family members with a valid right to stay in Poland before 1 January, 2021, and who continued to live in the country after that date, were considered beneficiaries of the WA. They did not lose their entitlement to live and work in Poland.

From the beginning of 2021, UK citizens and their family members living in Poland had to submit applications for new residence documents (pobytowych dla beneficjentów Umowy Wystąpienia). The purpose of these new documents was to show that they’d been issued in accordance with the WA.

Beneficiaries of the WA were urged by the authorities to obtain new residence documents. Holding such documents facilitated the use of the rights of the beneficiary of the WA when crossing borders and during one’s stay in Poland.

UK citizens entering Poland after the end of the transition period

The general rules on entering and residing in Poland relating to third-country nationals apply to UK nationals and their family members who enter Poland after the end of the transition period.

UK citizens are exempt from the visa requirement for short stays in the Schengen area. In line with Regulation (EU) 2018/1806, the short-term stay shall not exceed 90 days in any 180-day period.

UK nationals and their family members are now subject to border control procedures carried out by Poland’s Border Guard. Their passports are stamped when arriving in and leaving Poland. This makes it possible to calculate the 90-day stay under the visa-free regime.

First of all, Brits who didn’t submit an application for a residence document under the WA by December 31, 2021, have nothing to fear in terms of their residence rights, providing that they continued their stay in Poland after the end of the transition period.

Summing up – Brits living in Poland after Brexit

Reading Polish legislation aimed at ensuring the application by the Republic of Poland of the Withdrawal Agreement with regard to the residence rights of UK citizens made my head spin.

As of December 1, 2021, around 3,700 Britons living in Poland applied for a residence permit through the simplified application program. Around 6,500 Britons live in Poland.

Probably, there are a few thousand Brits whose heads have been spinning since the transition period was agreed between the UK and the EU. Perhaps they prefer to take a laissez faire approach to their residency in Poland.