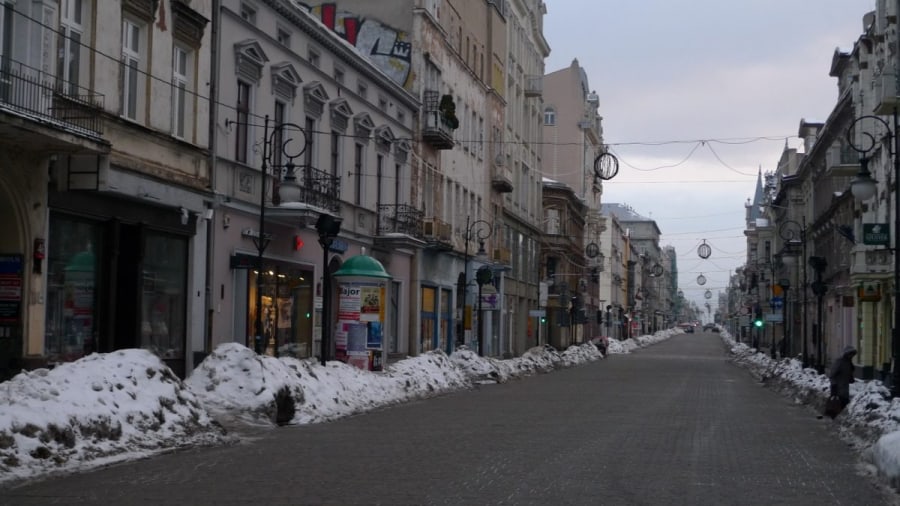 Here we have it – Finding Poland’s first book review. Classrooms and barrooms: An American in Poland – By David J. Jackson.

During a semester-long Fulbright lectureship in Łódź, David taught political science courses in the Department of American Studies and Mass Media at the University of Łódź.

In Classrooms and Barrooms, David describes his mostly uplifting and hilarious experiences in the classrooms and barrooms of Poland.

As I lived in Łódź for 18 months, I’ll try to compare some of my observations and experiences with David’s.

The aim of the US Fulbright Program is to improve intercultural relations between America and other countries. Exchanging knowledge, skills and personnel are central to fulfilling that goal.

One of the book’s main draws is the author’s willingness to embrace everything that Fulbright stands for. This “mutual understanding between the people of the United States and the people of other countries of the world” shone through in David’s lectures at the university.

Former Fulbrighters had warned David that Polish students are generally “undeferential to their professors”. Nevertheless, David’s ability to get students debating US-related affairs, such as the possibility of Barack Obama becoming US President and also the greatest ever US president, will only serve to skyrocket your admiration for this man by the time Chapter 11 is done and dusted with.

Some of David’s students did come out of their shell. Therefore, I have little doubt that David “went; he saw; he lectured; he conquered.”

A former Fulbrighter once told David that Łódź is considered to be the “booby prize” of Poland.

Kraków was David’s first-choice destination, mostly due to the fabulous reputation of the city’s Jagiellonian University.

Anyhow, news reached David that he would be teaching in the “Polish Manchester” for a year. He was only slightly disappointed as he had known it was coming.

Head held high, David was intent on seeing Łódź as a “unique” place. Indeed, the experiences he could potentially amass in “concrete jungle” would surely nullify the effect of not being selected to live in a, well, less grey city.

Back in 2006, an old friend of mine gave me a postcard with a thought-provoking message on it. This message was: “It doesn’t matter where you live, if you are happy.”

My friend’s words began to ring true by about my third month in Łódź. Due to my students, favourable working conditions, the people I met, my psychological development, the running I did in Łagiewnicki Forest and the stable routine I fostered, I can honestly say that I was very content in Łódź.

Frankly, I didn’t encounter any of the “Polish Manchester” stereotypes in Łódź because I was too busy being “content”. Even when I didn’t see the sun for three months throughout the winter of 2012-13, I didn’t complain. I just got on with things.

Overall, I see myself in David’s writing. You have to take places as they are. And when you see grey city walls covered in graffiti with the occasional stars of David and swastikas, it’s better just to “learn to take Poland as it is”.

An open mind and a positive attitude

Most of the Brits and Americans I met in Poland complained about the difficulty of the language, the cold weather and the lousy pay.

Honestly, I don’t do whingers any more, and David is certainly not one of those. Therefore, the real and impartial Poland jumps off the pages of Classrooms and Barrooms.

David’s teaching schedule included the fruitful idea of lecturing on Saturdays. Many western teachers would have flipped their lid at such a prospect. Calm and rational, David poses the question: “aren’t weekends just an artificial construct? I mean, if I had Monday and Tuesday off, that’s the same as a weekend, right?”

Reading Classrooms and Barrooms, you should begin to feel grateful for what you have in life. Moreover, everyone should step out of their comfort zones every so often. As David puts it, with reference to teaching in Łódź : “It’s a great feeling when you discover that you actually can do something a little different than what you’re used to doing.”

On Wigilia (Polish Christmas Eve), David eagerly accepted an invitation to his student Agnieszka’s house to celebrate with Aga, her husband and family. David provides insight into the typical culinary approach to Christmas Eve which Polish families adopt. All in all, very fishy and full of mushrooms.

There are other examples of David’s willingness to visit his Polish students and colleagues’ houses on special occasions. Due to his Polish-influenced upbringing in the US, David was familiar with the traditions and customs he witnessed in Łódź. Nevertheless, every family puts their own spin on traditions. Hence, it was extremely eye-opening for David to observe these subtle variations.

David’s hilarious reflections on the events he witnessed in a bar called Kresowa will have you compulsively turning the pages.

Kresowa became David’s home away from home. One of his first conversations in Kresowa provides ample insight into the bizarre scenes David would go on to witness in the bar:

“Do you like it here in Litzmannstadt?” he repeated.

In honour of the German general, Karl Litzmann, the Nazis changed the name of the city to Litzmannstadt after the Nazis defeated the Łódź Army in 1939. Litzmann had tried (and failed) to take the city during the First World War.

Unable to resist a recommendation of Kresowa he read in the travel guide In your Pocket, with such great lines as “A locals bar with a mixed clientele from the lower rung of the social ladder”, “Stained and stinking from years of beer and cigarettes” and “A great place to prop up the bar and listen to local drunks rant and ramble about all that is wrong with the world,” David literally pushed his away into the bar for the very first time.

The scene was set. A balding bartender with a stern “I dare you to try to order a beer” face. The bartender’s strikingly beautiful girlfriend sitting at the bar smoking cigarettes whilst nodding along to a rambling old Supertramp fan. A group of young men swigging vodka whilst playing terrible music on the jukebox. Finally, the icing on the cake – the owner. David describes him as “a very fat man with a grey beard and blue suspenders”. The author recalls how the owner put a gentle getting-to-know-you type question to him: “left wing or right wing?”

David’s second visit to Kresowa opened his eyes to something I noticed a lot in Poland – a beautiful woman cuddling up to a strong-looking bald guy. This particular bald-guy-of-the-day “looked like he wanted to kick someone’s ass – anyone would do.”

The odd characters and stories keep on coming in Classrooms and Barrooms. Here’s a rib-tickling scene dominated by a small man with thinning hair and communist era eyeglasses:

This particular night, though, his mission in the bar was to help hang the Christmas lights. I have no idea how or why he was assigned the task, but the owner gave him the tangled lights as he was leaving with six big cans of dog-food and a Tupperware tub of red bigos. The little man couldn’t untangle the lights on his own, so the grey-haired bass player helped him. They would argue, pull a section apart, then wrap the whole long string between two chairs like people sometimes do with yarn on a pair of hands. The progress was slow, the arguments intense. It was, I believe, a very Polish moment: two Poles with tangled Christmas lights, and three opinions about how best to untangle them.

An American in the “Polish Manchester” – Final thoughts

I feel that David got the balance just right in Classrooms and Barrooms. From the historical facts to the hilarious stories in Kresowa, and from the positive attitude to the sometimes harsh reality of life in Poland, David doesn’t cut any corners in his book.

David grew up in a family steeped in Polish-American traditions. For that reason, he went to Poland as a “sympathetic friend”. He returned to the US as one as well.

* Grab a copy of Classrooms and Barrooms on Amazon – click here